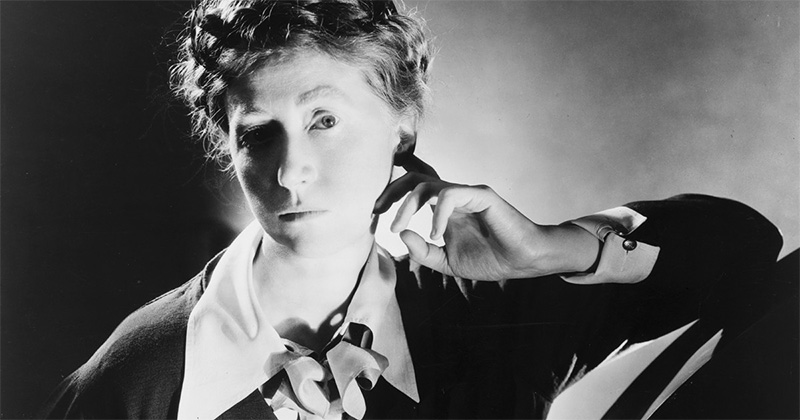 In January 1919, Marianne Moore wrote a letter—the first of many—to her fellow poet-critic Ezra Pound. Pound had initiated the correspondence after encountering some work Moore had submitted for publication in the Little Review, seeing in her work some similarities to his own. After politely deflating most of his conjectures (“The resemblance of my progress to your beginnings is but an accident so far as I can see”), she makes so bold as to advance an unsolicited opinion of Pound himself:

I have taken great pleasure in both your prose and your verse, but it is what my mother terms the saucy parts, which have most fixed my attention. In 1911, my mother and I were some months in England and happening into Elkin Matthews’s shop, were shown photographs of you which we were much pleased to see. I like a fight but I admit that I have at times objected to your promptness with the cudgels. I say this merely to be honest.

The whole passage has a typically Moorish ambiguity of tone—the attention she pays to Pound and his work is decorous, flirtatious, and disapproving in equal measure—but the phrase that jumps out is the penultimate one, which characterizes not Pound but Moore herself: “I like a fight but I admit that I have at times objected to your promptness with the cudgels.” This qualified, partially self-negating criticism encapsulates a characteristic mode of Moore’s writing, what I will call her “antagonism toward agonism.” This is not the same as a simple abhorrence of confrontation or violence; after all, Moore admits that she does “like a fight” and is, not incidentally, picking one here—and with a formidable opponent—by objecting to Pound’s aggressive behavior. But the fact that Moore, at this relatively early stage of the development of modernism and of her career, felt the need to register an objection, not to any particular attack of Pound’s but to his tendency to attack in general, is significant.

Moore’s early tête-à-tête with Pound provides a rather neat and surprisingly early indication of the tenor of their subsequent relationship—they would not meet in person until 1939—and of her relationship to her majority-male modernist cohort as a whole. As with Pound, so it was with poet-critics like William Carlos Williams, Richard Aldington, and Eliot, all writers whose vitality and engagement Moore admired but whose tendency toward aggression she could not. Moore had much invested in being regarded as a peer by these writers (as, for the most part, she was), and she recognized that these men showed their mutual regard in large part by arguing passionately with one another. But she never fit easily into their quarrelsome company. Her criticism, unlike that of her contemporaries, seems allergic to argument, reluctant to take up or defend abstract positions, and fearful of negative evaluations and judgments.

But although she was obviously a modernist despite her reluctance to disparage or abandon the literary modes of the 19th century, Moore was just as obviously a full-fledged poet-critic. Her collected critical prose fills many more pages than either Williams’s or Wallace Stevens’s, for instance, and, as many have noted, seems more of a piece with her poetry than that of most modernists. A random sentence of Moore’s—“The acknowledgment of our debt to the imagination, constitutes perhaps, its positive value,” for instance, or “Ecstasy affords the occasion and expediency determines the form”—could just as easily be drawn from her criticism as her poetry; the two corpora mirror, complement, and inform each other almost perfectly.

Indeed, early assessments of Moore’s poetry often refers to its “critical” qualities. Mark Van Doren, for instance, reviewing Moore alongside Edna St. Vincent Millay and Anna Wickham in the Nation under the heading “Women of Wit,” writes: “For better or worse, these women have contracted marriages with wit, have committed themselves to careers of brains. . . . [Their poetry] is independent, critical, and keen, a product oftener of the faculties than of the nerves and heart; it is feminine; it is fearless; it is fresh.” Similarly, Louis Untermeyer, in a 1923 piece titled “Poetry or Wit?,” speaks of Moore’s “highly intellectualized dissertations in the form of poetry” and states that “all of her work displays a surface of flickering irony, a nimble sophistication beneath which glitter the depths of a cool and continually critical mind.”

As these excerpts suggest, an implied contrast between “critical” and “lyrical” poetry—already shadowed by an equivalent contrast between “masculine” and “feminine” temperaments—was crucial to Moore’s early reception. Some commentators even go so far as to suggest that Moore is claiming the wrong genre for her work. Untermeyer, for example, finds that “practically all the contents of Poems are essays in the disguise of verse, arguments or statements which seem continually to be seeking their prose origins. . . . [T]he critical faculty predominates. . . . [O]ne finds it difficult to understand why this analyst writes so little in what seems to be her native medium.” Untermeyer’s dismissive assessment of Moore as being out of her “native medium” betrays some of the familiar modernist suspicion about feminine writing, but with the terms oddly reversed: although modernist-era critics rejected much writing by women as being insufficiently tough or intellectual, Moore’s work was taken to task as too clinical, too analytical, too oriented toward “arguments” and “statements” as opposed to the cognitively vague lyric utterances expected of a turn-of-the century poetess.

While Moore’s poetry was frequently faulted (and also, on occasion, admired) for its cold, critical, even unlyrical objectivity, her critical writing was often accused of the opposite crime: of being too sensitive, or impressionistic, or “poetic” in a stigmatized, feminized sense. Even otherwise admiring readers frequently advances this charge against Moore. Donald Hall, for example, describes her critical pieces as “impressionistic and unaimed,” and Bernard Engle damns them with faint praise by calling them “graceful presentations of observations and impressions, the kind of statement one might expect from a good reader rather than from a professional critic.” While her poetry was often criticized as too intellectual and argumentative, Moore’s criticism tended to be seen as just the opposite: “graceful” and sensitive but lacking in intellectual rigor, innocuous and a little old-fashioned, and fatally reluctant to advance clear positions or offer confident negative judgments.

Perhaps the harshest assessment of Moore’s criticism along these masculinist lines is also one of the earliest, published by Gorham B. Munson in his 1928 book Destinations while Moore was still serving as editor of the Dial:

The critic must be ambitious and Miss Moore is not. She attempts to make no more than a sensitive impressionistic sketch of her reading, a sketch that is always liberally studded with quotations from the author under review, and carries a valuable sentence or two of acute technical understanding for good measure. The quotations are ably selected for the object she has in mind, which is to give the “flavor” of the author. But, after all, the “flavor” is in the book and each reader of it may garner his own impressions. The critic must do more than that. At any rate, he should not be backward about handling ideas.

In contrast to an ideal “ambitious” critic (conspicuously gendered male, as are the “poet” and the “editor” elsewhere in Munson’s essay), Moore is “no more” than “sensitive” and “impressionistic” and is by implication “backward” when it comes to the supra-aesthetic business of “handling ideas.” The physical and the metaphysical come together here: ideas are a kind of cargo that only men are strong enough to handle, whereas direct quotation—Moore’s critical technique of choice—amounts to little more than a feminine rearrangement of furniture.

It is important to see that these symmetrical tendencies in Moore’s reception—the tendency to view her poetry as unusually (or fatally) critical and the tendency to view her criticism as unusually (or fatally) poetic”—are more than misunderstandings; in fact, they point to something that later and otherwise more sympathetic and sophisticated readings of Moore’s poetry and criticism have neglected.

This picture of Moore as at once too critical to be a poet and too poetic to be a critic, while inadequate as a qualitative judgment on one or both sides of her literary practice, does call attention to the deep-seated ambivalence toward critical agonism and, more broadly, toward all forms of negativity that Moore manifested throughout her writing career. In fact, Moore was at times not just ambivalent about the ugly feelings of agonism and negativity but openly antagonistic to them. As a subtly angry couplet in her 1923 poem “Marriage” has it: “Men have power/ and sometimes one is made to feel it.” Both of Moore’s signature styles—her critical poetry and her poetic criticism—have their root in a single, complex desire: to avoid an overt posture of agonism, always associated in her mind with disagreeable masculinism, without sacrificing the critical agency associated with negative judgment. Moore wanted to wield critical and institutional influence without engaging in the agonistic public displays that Pound, Eliot, and other modernists savored; to have power, in other words, without taking up the cudgels. 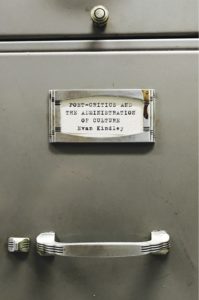 From Poet-Critics and the Administration of Culture. Used with permission of Harvard University Press. Copyright © 2017 by Evan Kindley. 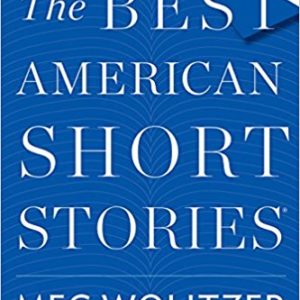 The following story will be read by the actor Bhavesh Patel at Symphony Space in New York City on Wednesday, October 4, as part...
© LitHub
Back to top
Loading Comments...