Lynn Caponera on the Wild and Wonderful Legacy of Maurice Sendak

“His work had the magical ability to be different and still be essentially Sendak all at the same time.”

Via Columbus Museum of Art
By Lynn Caponera

The typical question when calling the Sendak house was “Is he working?”

And the typical answer was “Yes!”

Friends knew that for Maurice work was a sort of life support. And those in his circle, we who loved him, strove to create an atmosphere conducive to that work that kept him alive. 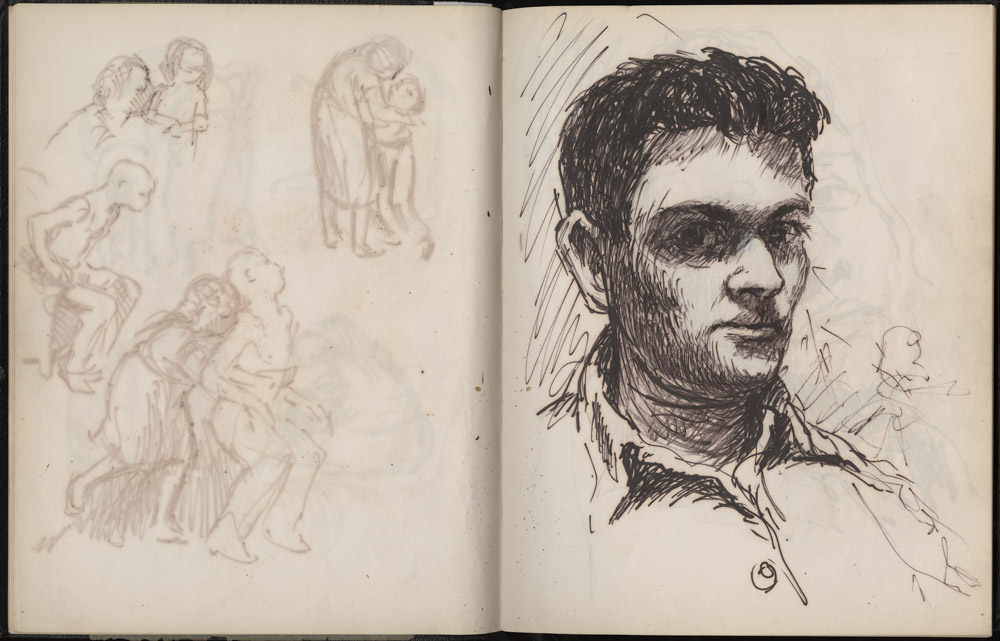 Maurice found comfort in a rigorous schedule: up at 9:00 am, green tea and English muffin spread with just the right amount of orange marmalade, freshly squeezed orange juice and two hours of reading the New York Times, sprinkled with the hilarious, ridiculous commentary that he swore, of course, he was reading in the paper. 11:00 am answer or return phone calls; 12 noon shower and dress, then an hour walk with one of his beloved dogs.

It was during his walk time that guests could visit if they liked. But it was walk and talk and a quick bite for lunch then off you go. If you weren’t too demanding of his time, you might be asked to sit in the studio while he worked. 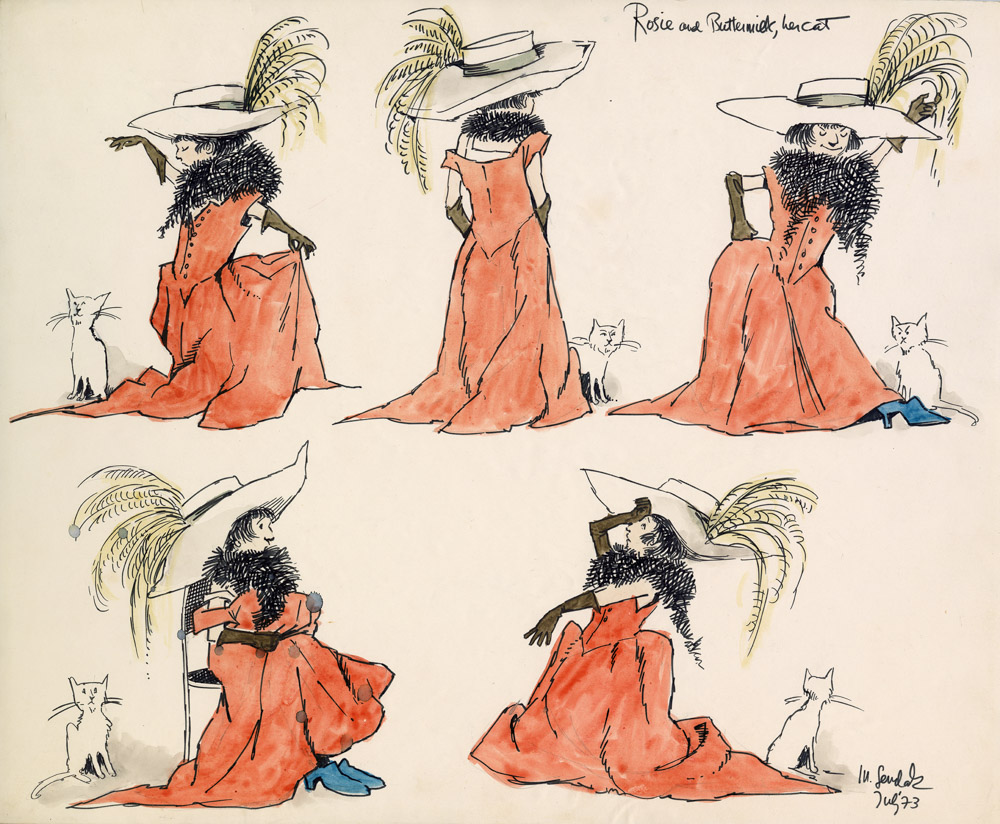 Rosie and Buttermilk her cat. © Copyright The Maurice Sendak Foundation.

He had this uncanny ability to draw and paint while having a conversation, listening to the TV or music on the stereo or radio. It was almost as if he needed to occupy one side of his brain to let the other side create. While working, the only time he needed complete silence was when writing, which he said didn’t come as easily as drawing.

5 pm was news on the TV time and cake, most likely a piece he saved after having a piece with lunch. 7 pm was nap time, then, after waking, dinner while watching old movies or anything to do with nature. 9 pm it was back at work in the studio until the 11 o’clock news came on. Then more cake and…yes, more work till 2 or 3 in the morning. 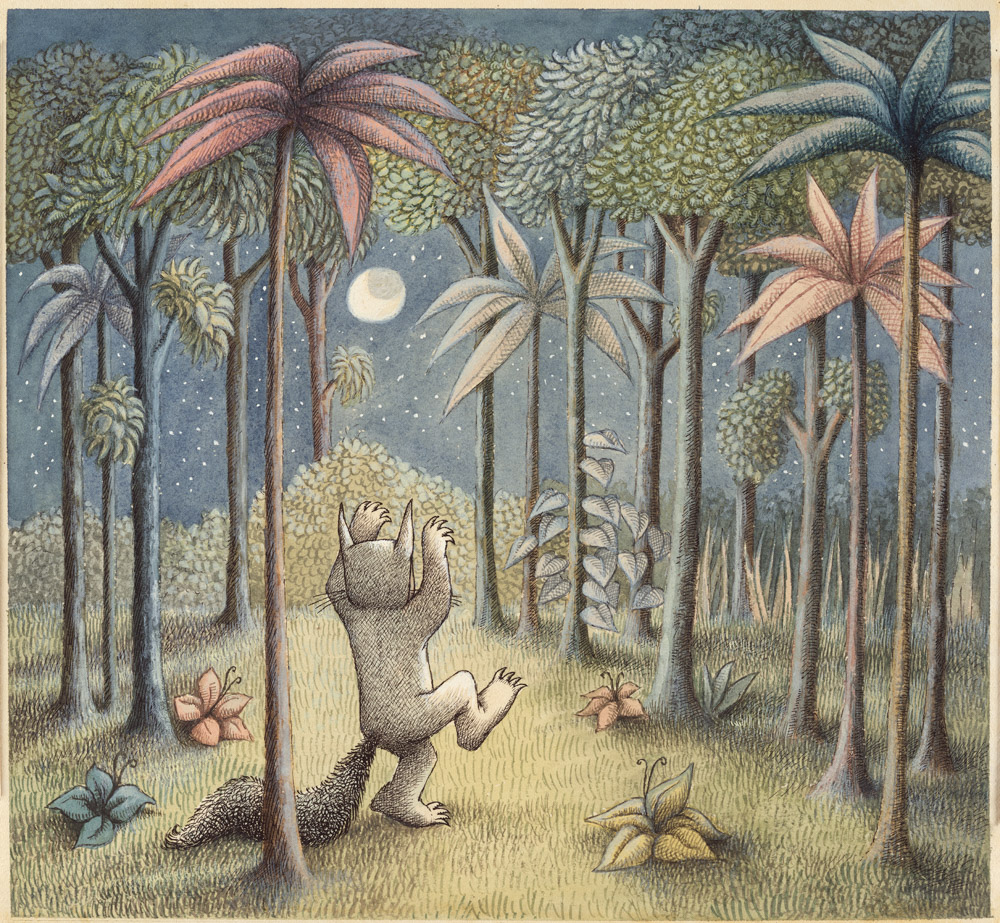 Where the Wild Things Are: The walls became the world all around. © Copyright The Maurice Sendak Foundation.

Maurice followed this routine just about every day. He didn’t like going to parties or doing anything that would disrupt his work time. His friends understood that if you wanted him in your life you had to fit into his schedule, which they gladly did, since it’s not often you can witness a genius at work.

He didn’t have any formal education in art. He chose from an early age to educate himself, to study and draw on his own. While most kids would pin up athletes and movie stars on their bedroom walls, Maurice would pin magazine clippings of Titian and El Greco paintings. He would spend countless hours sketching his family and the children playing in the streets outside his apartment window. 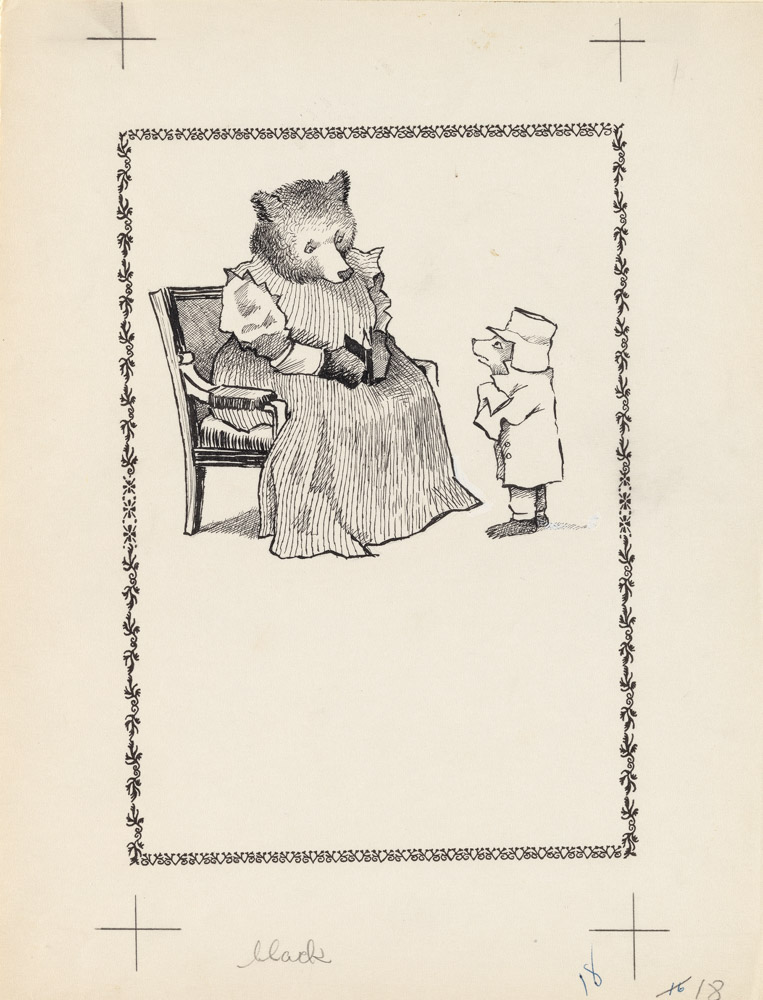 Even after becoming a successful artist, he kept up his studies throughout his life. His immense knowledge of art and literature made it possible for him to seemingly shape shift between different styles of illustration. His work had the magical ability to be different and still be essentially Sendak all at the same time.

When Jonathan Weinberg suggested the foundation should mount a retrospective of Maurice’s work it was an enthusiastic “Yes!” Afterall, Jonathan and I spent more than forty years peering over his shoulder at his drawing table. We witnessed how he would draw on his deep knowledge of artists from the past to weave their way into whatever his current book or opera project was. 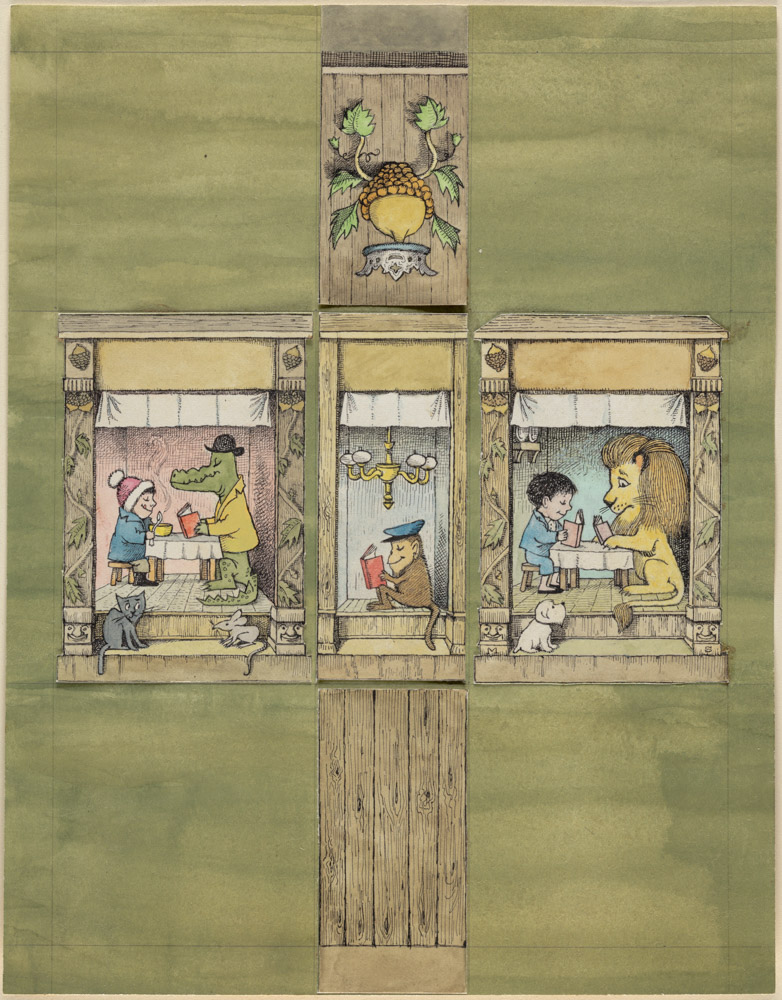 The life of an artist can be a lonely business, but having his old friends, the long-gone artists and composers whom he revered, helped him persevere through his long work hours and his bouts of depression. It was simple. Work was his salvation.

Those of us who knew him—well, we are fortunate to have been mentored by Maurice in how to make a picture book. Watching him journey from a single note, idea, sketch all the way to a full-blown finished book was a master class. I think while you’re here flipping through this book or experiencing the exhibition in person you will no doubt come away feeling the need to look deeper into Maurice’s work and the artistic gods who inspired him. 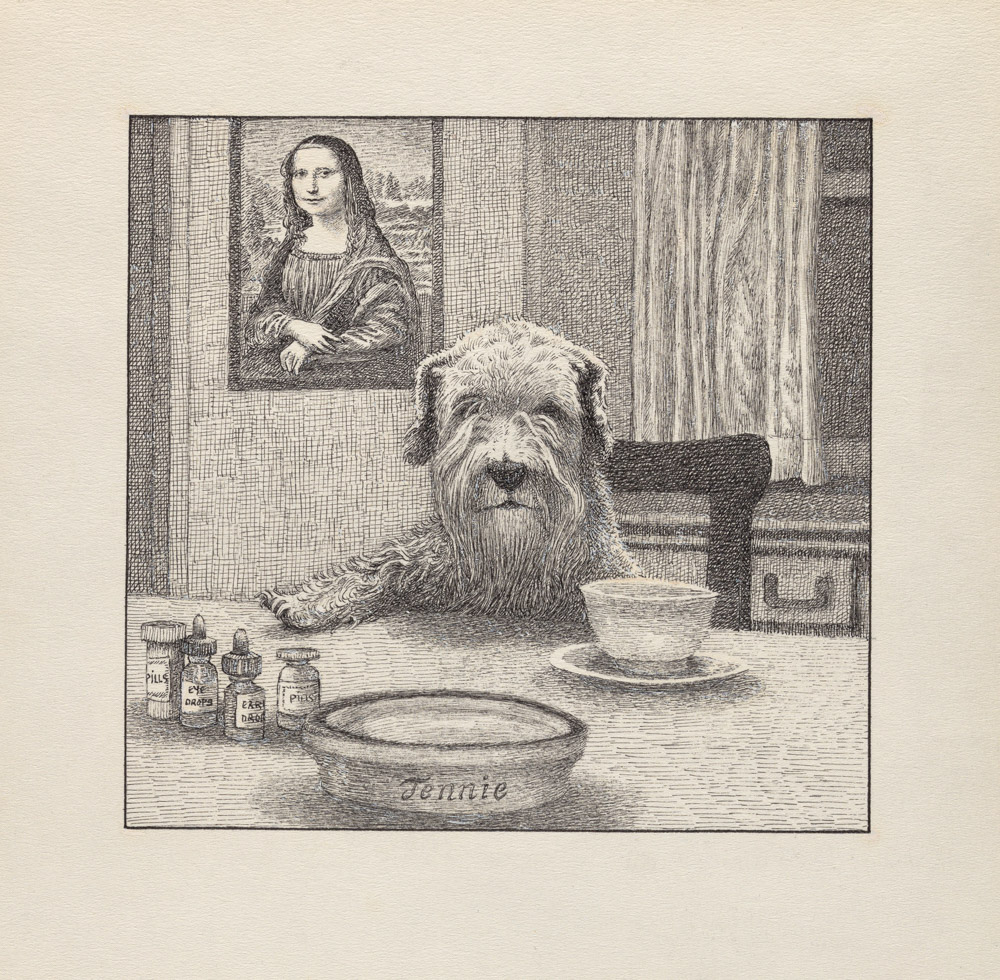 Maurice liked to quote one of his heroes, Herman Melville, who said

Artists have to take a dive, and either you hit your head on a rock and it splits your skull, and you die, or that blow to your head is so inspiring that you come back up and you do the best work you ever did. But—you have to take the dive. 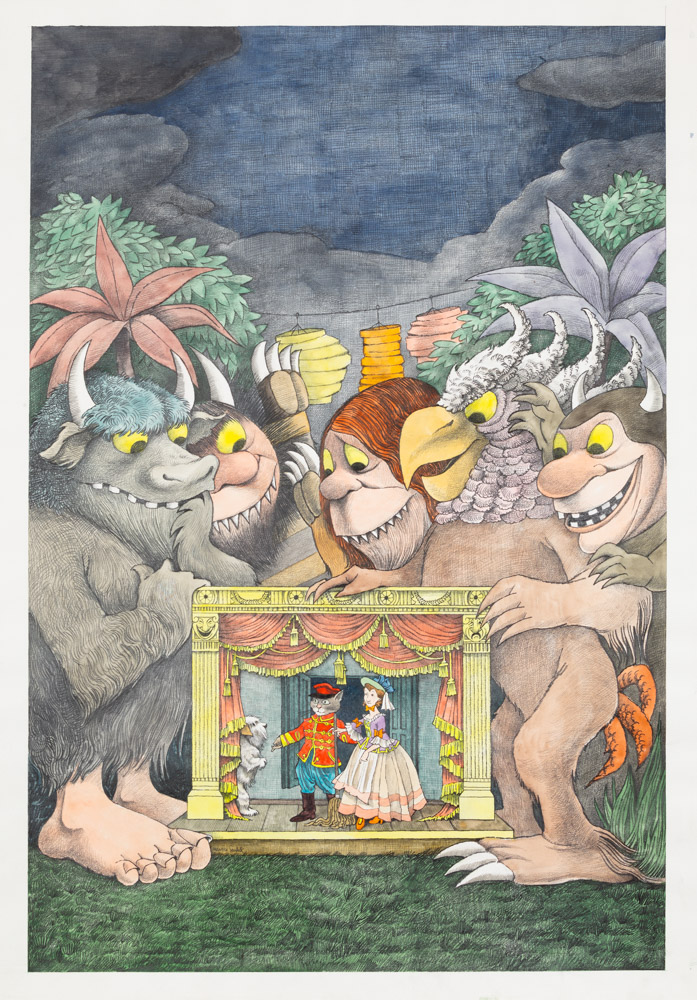 Poster for Where the Wild Things Are and Higgelty Opera. © Copyright The Maurice Sendak Foundation.

We invite you to take a dive! Wild things are happening here. Indeed. 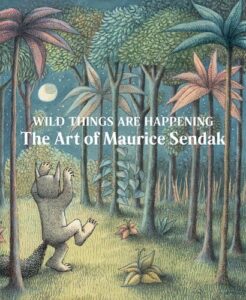 Excerpted from Wild Things Are Happening: The Art of Maurice Sendak, edited by Jonathan Weinberg. Copyright © 2022. Available from DelMonico Books and the Columbus Museum of Art.

Lynn Caponera is the President and Treasurer of the Maurice Sendak Foundation. 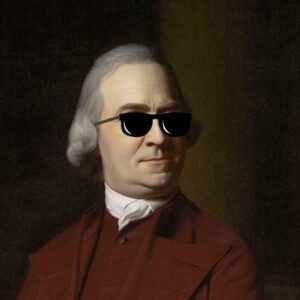 How Samuel Adams Fought for Independence—Anonymously Enlisting an army of alter egos, Adams took the quarrel to paper. In the feather bed on Purchase Street, the world hushed...
© LitHub
Back to top
Loading Comments...