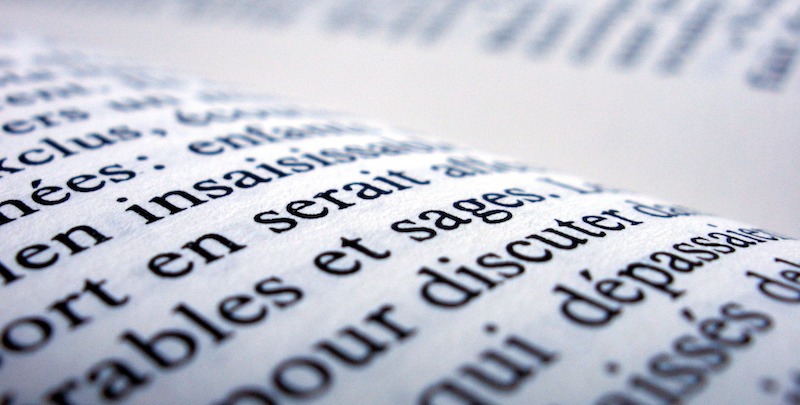 “You are ventriloquist and chameleon.”

The translation problems that you have struggled with the hardest, perhaps never satisfied with your solutions, will stay with you for a long time—you can count on it. A few years ago, in June, on a trip to France, I was taken by French friends for a wine-tasting in the small Burgundian town of Beaune, south of Dijon. During the wine-tasting, we were at one point instructed to mâchez le vin—I can’t remember now whether this was while we still held the wine in our mouths, or after we had swallowed or spat it out. Now, when this phrase was spoken, I became instantly alert, my translator-antennae going up: using the verb mâcher, “chew,” for something that you can’t actually chew was a problem I had spent several hours on during my translating of Madame Bovary some seven years before. The word occurs in a passage near the beginning of the novel, when Charles Bovary, at least, is still happy in his marriage, and Emma is not yet obviously restless or unhappy. This passage very well illustrates Flaubert’s antiromanticism:

This was how I translated it:

And then, on the road stretching out before him in an endless ribbon of dust, along sunken lanes over which the trees bent like an arbor, in paths where the wheat rose as high as his knees, with the sun on his shoulders and the morning air in his nostrils, his heart full of the joys of the night, his spirit at peace, his flesh content, he would ride along ruminating on his happiness, like a man continuing to chew, after dinner, the taste of the truffles he is digesting.

I like to reproduce the word order, and the order of ideas, of the original whenever possible. Flaubert ends this otherwise-lyrical paragraph with the words truffes and digèrent—in other words, his rhetorical buildup, in describing the sensuous, placid happiness of a man in love, ends with a reference to digestion and a black, smelly fungus. This is typical of Flaubert, who likes to create a traditional writerly effect, romantic or sentimental, and then, when we are well entranced, bring us back down to reality with a thud by offering us a mundane, preferably earthy image—truffles in this scene, potatoes in a later one.

The problem for me, however, was the word mâchent, which I translated as “chew.” Of course I wanted to retain the idea of chewing, especially since it follows the lovely “ruminating,” which is not only an apt word for Charles’s idle thoughts, as his horse ambles along, but also yet another veiled reference to one of Flaubert’s favorite metaphors—the bovine—which makes regular appearances in his work, even in character names such as Bovary and Bouvard.

But how do you chew a taste?

What I did not do, during the wine-tasting in Beaune—a cause for some lost sleep once I returned home—was ask the professional who was assisting us on our tour just how he translates mâcher into English, for English-speaking visitors, since there must be an accepted translation for this in the wine-tasting world, at least.

This phenomenon, of slipping into the style of another writer, gives you great freedom and joy, in your manipulation of language.

Still, the experience answered one question—the word mâcher, unlike “chew,” can be used for something that, in my opinion, you don’t chew.

In translating, you pose yourself a question—or it is posed to you by the text; you have no satisfactory answer, though you put something down on paper, and then years later the answer may turn up. Certainly you never forget the question.

I have had two literary occupations, and preoccupations, all my adult life, both evidently necessary to me, each probably enhancing the other—writing and translating. And this is one of the differences between them: in translation, you are writing, yes, but not only writing—you are also solving, or trying to solve, a set problem not of your own creation. The problem can’t be evaded, as it can in your own writing, and it may haunt you later.

In translating, you are forming phrases and sentences that please you at least to some extent and most of the time. You have the pleasure of working with sound, rhythm, image, rhetoric, the shape of a paragraph, tone, voice. And—an important difference—you have this writing pleasure within the island of the given text, within its distinct perimeter. You are not beset by that very uncomfortable anxiety, the anxiety of invention, the commitment to invent a piece of work yourself, one that may succeed but may also fail, and whose success or failure is unpredictable.

I am writing, but not my own work. The words are my choices, but only within limits. I am working very hard at one aspect of writing, but I am not, altogether, the writer of this passage. I can work as hard and as happily as I like at this writing without the more general doubt that might accompany, even if ever so subtly or faintly, any writing wholly my own. Or perhaps it is not so much doubt as the tension that this thing may not even come into existence, or that if it falters its way into existence it may not deserve to survive. Whereas there is no doubt that this French sentence before me must be written, in English, and be written in this way: now I can apply myself to doing it.

In this sort of writing, there is no blank page to worry about, when you sit down to write. Someone else has already written what you are about to write, someone else is giving you closely specific “guidelines”—in other words, the original text.

It is also a kind of writing you can do when you are blocked in your own writing. Roland Barthes is quoted by Kate Briggs in her fine book on translation, This Little Art, saying, in his lecture course on the novel: “I would advise a young writer who is having difficulty writing—if it’s friendly to offer advice—that he should stop writing for himself for a while and do translations, that he should translate good literature, and one day he will discover that he is writing with an ease he didn’t have before.” This was, in fact, exactly my situation—blocked in my own writing—when I began translating Maurice Blanchot for the first time.

For translators who are also engaged in writing of their own, here is another great pleasure: Just as you can enter another person and speak in his or her own voice, you are also no longer confined to writing in your own style and with your own sensibility, but can write in the style of Proust, for instance, with his elaborated syntactic pyramids, and then, a few years later, in the style of Flaubert, with his clipped clauses and fondness for semicolons. You are at the same time clothing yourself, for a while, in the sensibility of the original author: Proust’s affectionate portrait of the grandmother in Swann’s Way becomes my own affectionate portrait of her, in Proustian sentences. Flaubert’s moment of compassion for the dying Emma becomes my own compassion, in English, though I may privately feel more sympathy for the often derided Charles, quietly meeting his end in the sunlight, on a garden bench, as he is being called in to lunch.

This phenomenon, of slipping into the style of another writer, gives you great freedom and joy, in your manipulation of language. You are ventriloquist and chameleon.

And while you comply with this alien style, while you fit your own prose into it, you may also, positively, react against it, in your hours off, your away hours: it was while I was translating, with such pleasure, Proust’s very long and ingenuity-taxing sentences that I began, in contrary motion, to write the very shortest stories I could compose, sometimes consisting only of the title and a single line. 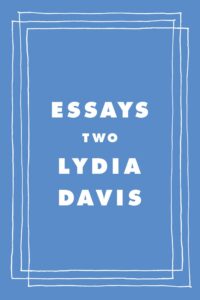 Excerpted from ESSAYS TWO: On Proust, Translation, Foreign Languages, and the City of Arles by Lydia Davis. Published by Farrar, Straus and Giroux. Copyright © 2021 by Lydia Davis. All rights reserved.

Lydia Davis is the author of one novel and seven story collections, most recently Can’t and Won’t. Her collection Varieties of Disturbance was a finalist for the 2007 National Book Award, and her Collected Stories was described by James Wood in The New Yorker as “a grand cumulative achievement.” She is also the acclaimed translator of Swann’s Way and Madame Bovary, both of which were awarded the French-American Foundation Translation Prize. Among many other honors, she received a MacArthur Fellowship in 2003 and the Man Booker International Prize in 2013, and was named both Chevalier and Officier of the Order of Arts and Letters by the French government for her fiction and translation. 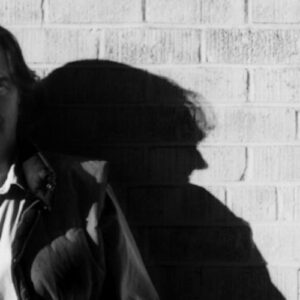 My first thought: Murder City, solid title. It was 2011 and I was scraping by in San Francisco, spending hours at the public...
© LitHub
Back to top
Loading Comments...