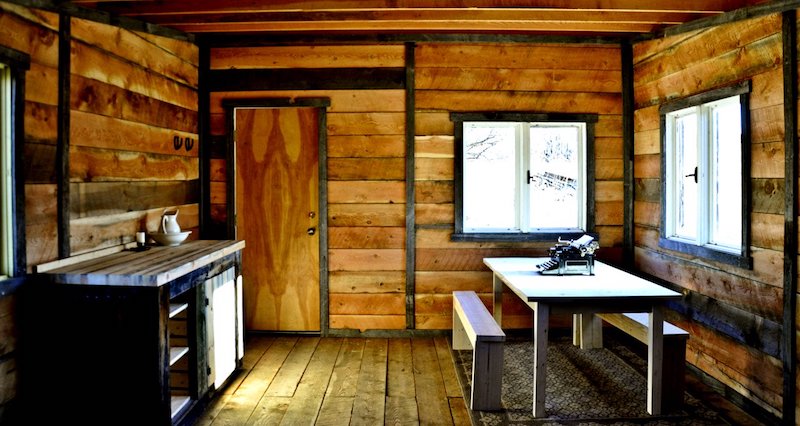 Lydia Conklin on Writing Residencies and the Invaluable Gift of Permission

I never flew on an airplane until I was seventeen, never traveled west of Wisconsin until I was in my late twenties. But, through the generosity of writing residencies, I’ve lived for three to fourteen weeks at a time in states I’d never so much as visited before: Oregon, New Mexico, Washington, Virginia. At each, I made close friends, wrote ten times more than I could’ve at home, ate food legions more flavorful than the clear broth with carrots floating in it that was my go-to ascetic meal for years, and hiked even where I wasn’t allowed to. I was reprimanded in Alaska and Wyoming for being too adventurous—in Alaska, swimming in the frigid ocean under looming volcanoes, I dodged an attack from a sea otter.

As a child, I got to spend a couple weeks a year at a wild summer camp in Vermont. The camp was run by hippies and boasted a loose curriculum. Children were allowed to choose whatever activities they wanted during four blocks of time, two in the morning and two in the afternoon. You could go to Arts and Crafts four times. You never had to indulge a sport. You could even choose to do nothing. I often chose nothing, sitting in the peace of my empty cabin, reading or thinking. Camp was a dreamscape for a child who knew they were queer but hadn’t yet told anyone: the forest, no boys, no one watching you closely or subconsciously policing your gender.

Residencies remind me of camp. You’re out in the woods, surrounded by strangers who become friends. There are no “rules”—here the rules being the drudgery of domestic life, which I hate: no shopping, cooking, cleaning. No errands, no compulsory attendance at events. No watering of plants or temptation to organize, because you’re in a whole new space, blank, like a hotel, but cozy, with none of your possessions to menace and distract. All you have is your work and the feral part of yourself that wakes up in the woods.

I’ve been lucky to have enjoyed the privilege of attending residencies. Most writers can’t—if they have children or other family obligations, jobs that are in person, or if they can’t pass through capricious juried processes or afford travel costs. But because I teach and work freelance jobs, I have been able to support myself financially while attending residencies.

Without a traditional family of my own, residencies have been an invaluable support system. I’ve met some of my dearest friends at residencies, some of whom I still talk to every day. At my first residency ever, I met the writer who became my girlfriend of nine years. After we broke up, at each of the two residencies I attended as a single person, I began new romances.

The more people I meet at residencies, the more chance I’ll know someone when I move to a new city for my next teaching gig or even just for a conference where I’m presenting on a panel. The world is large and lonely when you move every academic year, but, with a network of friends all over the place, it starts to shrink. That’s one of the hidden gifts residencies give writers: the people. You might get to know people who’ll help you in your career, sure, or who you could help, but more importantly, you find people who will be your friends and supporters around the world, who will make the solitary practice of writing less lonesome.

But beyond all the lovely peripherals of residencies—all the animals I’ve seen (a family of baby weasels, a bobcat, a herd of fifty elk), all the sunsets over oceans and into mountains, all the dance parties and stories shared over bowls of vegetables—the most important gift a residency has to offer is the ability to work. And not just because all the chores and distractions of daily life are removed, and not just because of the money and space—though those benefits are huge—but because of permission.

There are some writers who hold onto a mandate to write no matter what blocks their way. Rejection after rejection, and they’ll press on, steadfastly certain of their talent and worth. But for many other writers, especially those with non-majority identities, it can be almost impossible at times to gather the courage to write—to believe that you’re good enough to put the time in, that someday someone will benefit in some small way from reading your work, that anyone should even be asked—by the shear act of putting a book into the world—to spend the time.

Beyond all the lovely peripherals of residencies the most important gift a residency has to offer is the ability to work.

At my very first residency, I was the youngest person there for most of my stay, the only person still in their twenties. I was in the middle of my MFA program, and it had not yet occurred to me that I could ever actually be a writer. I felt like a student at best, an imposter at worst. I qualified my presence for everyone I met—it didn’t make sense I’d been accepted, it was a mistake, I didn’t belong here.

I was shy to the point of silence at my first dinners, cowed by the accolades of the other residents: a famous experimental playwright, a novelist who’d just sold a book for an untold sum, a journalist with an Oscar, a performance artist who staged a mystifying dance with a cheeseburger. I was a pet to the artists who liked me, submissive and goofy, there to entertain and nothing more. I acted like a kid because I felt like one, among giants.

But through my weeks there, I began to abandon the sillier pursuits designed to protect me from my fear of writing—playing the ukulele and wandering the grounds, parceling my lunch out elaborately over the course of the day, throwing stones at a wasps’ nest on my door in hopes of dislodging it (it never once occurred to me to complain about this nest, though I was nearly stung daily.) I worked harder and longer, building my concentration. I discarded half a novel, started again from the top.

I’d been stunned by the freedom of time the year before, upon moving from Manhattan to Madison, Wisconsin. Leaving behind my office job and two hour commute and insane New York social life rendered time seemingly infinite, every day opening up into an expansive plane that was new to me, free of designing itineraries and websites and clattering through tunnels underground. This residency was even more extreme.

In Madison I taught and took workshop, had colleagues and the responsibility of feeding myself. I had a twenty-mile bike ride through the countryside and little cousins who needed babysitting, friends who needed support with dog care and breakups and injuries. In New Hampshire I had nothing else. Writing, for the first time, became my sole responsibility.

The last residency I attended was this past summer in Alaska. I hadn’t flown on a plane or strayed far from home throughout the pandemic. I’d had a brutal year—three pandemic breakups, the diminishment to a Zoom screen of a fellowship I’d worked for years to achieve, the longest interval in my life—fifteen weeks—between a hug from one friend and a hug from another, without anyone touching me in any way in between, two deaths of people in my life, one from of Covid. Unending loneliness and wanderlust.

In Alaska, for the first time in years, I felt that magical, sparkly feeling of being far away. I plodded along, redrafting a novel based on the feedback of my workshop group, facing sandhill cranes and moose out my window, three looming volcanoes: Redoubt, Augustine, and my favorite, Iliamna. I’d always longed to visit Alaska, and the residency gave me an experience that I never could’ve afforded on my own: living in a tiny but beautiful cabin on the edge of arctic wilderness for an entire month.

The immaterial gift of residencies is permission. If you’re lucky enough to be accepted, someone has handed you a ticket declaring you worth the investment.

Maybe it was partly being in a bizarre new place after a year in the same hundred and fifty square feet with the same miserable couple and their trampoline out the window, the same smell of sauteed cabbage breezing in at lunchtime, the same few people texting to check in, when they remembered me. Volcanos and the shuffle of grizzlies in the trees, where was I?

Something unlocked in Alaska. I’d been miserably blocked on comics for ages, had not done anything but fiddle with a long-done graphic novel for years. My inability to start a new project had plagued me. I’d told a story to a friend earlier that summer and he’d said, “You should write a comic about that.” People say that to me all the time and I never listen, but in Alaska, I began to draft the comic he’d told me to, my first new comics project in almost a decade. The white nights helped, sunshine until midnight. The days felt as long as I always wish days were.

And then, one morning before the early dawn, in the dim light, standing before Iliamna—a detailed behemoth that appeared sketched on the sky by some giant celestial art student, my world opened up a second time when I began writing a new novel that felt urgent and engrossing. I don’t know whether this novel will work or even ever be completed—whether it may one day join the heap of dead novels stored pointlessly on my computer—but it helped me unlock problems in my other novel and helped process a fourth pandemic breakup. And more than that, even beginning it at all opened me to the possibility that, whatever projects fail, more are out there somewhere, even if I have to go to Alaska to find them.

I couldn’t have learned concentration without the residency in New Hampshire, couldn’t have broken through on two fronts without the one in Alaska. The immaterial gift of residencies is permission. If you’re lucky enough to be accepted, someone has handed you a ticket declaring you worth the investment. I wish I didn’t require this kind of permission, and I’m jealous of authors who don’t seem to, but I always have. Especially during times when writing has felt hopeless—when the rejections pile up one after another, when I’ve banished another failed novel to the heap, when I’ve lost my chance, yet again, for a coveted opportunity or publication, when another academic year is cresting without the promise of health insurance, the permission to attend a residency has helped me go on. 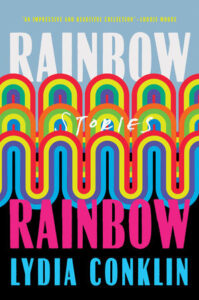 Rainbow Rainbow by Lydia Conklin is available now via Catapult.

Lydia Conklin has received a Stegner Fellowship, a Rona Jaffe Foundation Writer’s Award, three Pushcart Prizes, a Creative Writing Fulbright in Poland, a grant from the Elizabeth George Foundation, scholarships from Bread Loaf, and fellowships from Emory, MacDowell, Yaddo, Hedgebrook, Djerassi, and elsewhere. Their fiction has appeared in Tin House, American Short Fiction, and The Paris Review. They’ve drawn comics for The New Yorker, The Believer, Lenny Letter, and elsewhere. They are currently the Zell Visiting Professor of Fiction at the University of Michigan.

Why Did It Take So Long for Star Trek to Embrace Queer Characters? 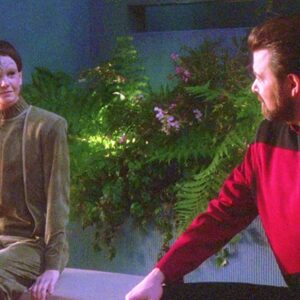 Why Did It Take So Long for Star Trek to Embrace Queer Characters?

Star Trek fandom is made up of several generations, and not all of those generations communicate effectively with one another....
© LitHub
Back to top
Loading Comments...