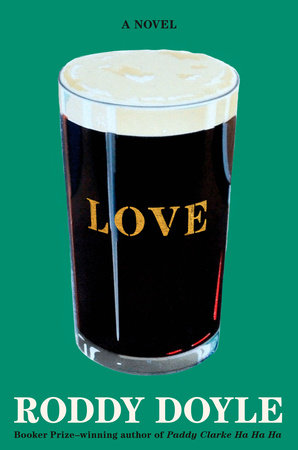 The following is excerpted from Roddy Doyle's new novel, Love. Doyle is the author of ten acclaimed novels, including The Commitments, The Van (a finalist for the Booker Prize), Paddy Clarke Ha Ha Ha (winner of the Booker Prize), The Woman Who Walked Into Doors, A Star Called Henry, The Guts and, most recently, Smile. Doyle has also written several collections of stories. He lives in Dublin.

We saw her there the first day, at a table under one of the windows.

We’d found a pub that liked us. We’d wandered the city centre for months, every weekend, starting after work on Friday and ending ten minutes before the last bus home on Sunday night. This was after I graduated and had new money in my pocket. We’d escaped from my front room and the record player. I could buy my round. We were peers now and we could become the lifelong friends we hadn’t really been before. Getting drunk together, sneering at the world together, aching for the same  women, denying it. We became the same man for a couple of important years. Before I left. Before he met Trish. Before I met Faye.

That day, the day we saw the girl who became the woman he saw years later, we got lost in the basement of Mercer’s Hospital. We’d left Sheehan’s on Chatham Street at the start of the holy hour – the pubs used to shut for an hour in the afternoon – and we’d wandered up to the Dandelion Market. But we were already too drunk – not drunk, exactly; more oiled – to flick through second-hand books and records. So we left, went back out on to South King Street. We  got a bowl of chilli in a tiny place long gone and without a name; I’ll never remember what it was called. It was so small, it didn’t have a toilet. That was fine back then, normal, a restaurant or café without a loo. We were on South King Street again. We were the same man and we admitted we were bursting for a piss, really bursting, half an hour before the pub doors would open. Mercer’s Hospital rose before us and we went in, trying to look like young men visiting a sick relative, and – I don’t know why; I don’t think I ever knew – we went down the stairs to the basement, instead of up to the wards. I remember the ceiling being low, just above our heads. There was no one else down there, no charging men or women in scrubs. There were no stretchers or abandoned wheel-chairs – I can’t remember any. One  corridor  became two corridors, and another two – and no toilet. We  ended up pissing into an enamel bucket in a broom cupboard, first him, then me; there was only room for one of us at a time.

We passed a toilet on our way back out. We didn’t laugh. We were quickly ashamed – I was. The pubs were open when we got out into daylight, through a different door.

It was right in front of us. We’d never noticed it before. It had its own corner. We must have walked past it once or twice but we hadn’t seen it.

—Looks okay, said Joe. And it did.

We were sober again. It was early winter, afternoon. The sky was clear and the sun was making blocks of yellow and grey – the last few hours before night, the perfect time for drinking. Mercer’s Hospital was behind us. Literally behind us. A pint would cure us, drown the shame. We’d start laughing again after the second.

The hospital was behind us. A pint would cure us, drown the shame. We’d start laughing again after the second.

We looked in the window. It was plain inside, but a bit more than the standard Dublin pub. There was less wood, more light. There was one man sitting at the bar, his back to us. He was wearing a suit and there was a grey ponytail resting on the back of the jacket. It was the first time I’d seen a ponytail on a man who wasn’t on The Old Grey Whistle Test. There were tables along the other wall, under a line of windows. Only one of them was occupied, by four people – a man and three women. There was a cello leaning against the wall between two windows, and three violin cases sat on the table beside them. The women were drinking pints.

She was one of those women.

The double door was on the corner, under a porch. He went for the right side, I took the left. Both doors opened when we pushed, then walked in side by side – and sideways.The doors swung back into place behind us. We heard them creak, and rest.

There was no television, no horse racing. No radio, no music.

No one looked our way.

The man with the ponytail was reading a magazine. It sat on the counter between his gin and tonic and an ashtray. The musicians were talking quietly. I didn’t know it then but the College of Music was around the corner, on Chatham Row. I heard strings and a trumpet coming from an open window the next time I passed it, the following Monday, when I was off on a wander during the lunch break. I’d been walking past the building for months.

There was no barman.

We stepped closer to the counter. We passed the musicians, went further – deeper – into the room, and took two stools at the end of the bar. We sat, and saw him. He was down on his hunkers, filling the lowest shelf with bottles of Britvic Orange. He heard us and turned, stood up, groaned, and smiled. It was the first time a barman had smiled at us.

—Gentlemen, he said. He was happy to see us.

We stayed there for months.

American Gods has a new annotated version with a Sherlockian twist. 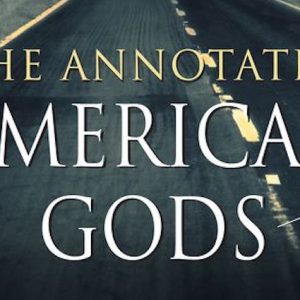