Louisa May Alcott: A Difficult Woman Who Got Things Done

On Writing the Alcott Sisters, in All Their Complexity

I grew up near Concord, MA, a town renowned for its Revolutionary War history and famous literary residents. When I was about ten, we visited Orchard House, the Alcott family home-turned-museum, and I climbed the uneven floorboards of the stairwell to emerge into Louisa’s restored bedroom. There, at a small desk in the corner, the tour guide told us Louisa May Alcott had written her now famous classic, Little Women, in two feverish months. I knew to be impressed.

Leaning in close to her desk to squint at a sepia-tinted photograph of the author, I longed to feel connection with the woman who had inspired my own emerging interest in writing. Instead I felt intimidated. Her hooded, dark eyes seemed to communicate that she might rap my knuckles with a ruler for stepping too close. Though a smile tugged at the corners of her mouth, I interpreted it to be an expression of gentle pity for my juvenile attempts at writing. In Little Women, Jo, the character Louisa based upon herself, scorns frivolity and wasting time on anything other than writing. Even at ten, I knew myself to lack her discipline. Disneyworld, Benetton rugbies, Atari, my new Madonna cassette—all of these frivolities appealed to me. Still, I remained in awe of her.

Almost three decades later as I embarked on writing a novel, there was no question what I would write about. My childhood obsession: the Alcott sisters. Were these women really the neatly categorized characters depicted in Little Women—the dutiful daughter, the tomboy, the angel, and the dilettante? I doubted it. I started researching, digging around for my story. After Louisa became famous with Little Women’s publication in 1868, poor health rendered her mostly a homebody. All she did was write. This single-mindedness served her career well, but her day-to-day existence was pretty boring. There was no great love affair, no extensive travel, no scandal. This wasn’t exactly the stuff of a page-turner.

But then there was May, the sister I knew very little about. Whenever I’d visited Orchard House, it was her small bedroom in the back with angels and creatures penciled on the walls that captivated me. Who was this free spirit? What was it like to be portrayed negatively in your sister’s novel? It turns out she didn’t let Amy March define the rest of her life. May joined a pioneering group of women artists in Boston and later traveled to Europe several times to hone her craft. Two of her paintings were exhibited in the prestigious Paris Salon. Eventually she chose to live in France permanently, a place she felt she was free to live with a husband, a man almost twenty years her junior. She wrote a book of her own. She was ambitious and tenacious, two qualities not frequently used to describe women in the 1870s. In short, she refused to ignore her career aspirations and chose to navigate the pressure of advancing her professional talents while also seeking love. While almost unprecedented back in her era, even in 2017 this continues to be a delicate balancing act for many women.

May became the main character of my novel, but Louisa continued to play a large role. Although the two sisters maintained a close relationship, glimpses of tension appear in their letters. When I read that Louisa was a chronic letter burner and even went back and rewrote some of her diary entries to repaint the historical record in rosier terms, I had the opening I needed to imagine a sister relationship in all of its real-life complexity, complete with love, jealousy, and competition.

Several early readers of my novel asked if I was worried people would be upset by my portrayal of Louisa as a challenging character to love. Yes, I was. But the notion that she needed to be lovable frustrated me. Why must successful women be agreeable? I wanted to depict Louisa as I believed her to truly be: flawed and prickly but talented and devoted to the people and causes important to her. After all, portrayals of perfect women do nothing to help us make any sense of our own imperfect selves.

Almost 150 years later, Louisa May Alcott continues to be a beloved American icon. Her portrayal of herself in Little Women does little to dissuade her followers that she was a girl with moxie and charm, that she was quirky and unusual. And she was. But she didn’t become a trailblazer by being likable in real life. All evidence points to the fact that Louisa was a difficult woman. She demanded attention at a time women were expected to fade into the background. She wrote snarky letters and editorials. She bickered with her publisher. She possessed a righteous streak. She abhorred suffering through the social niceties of the time and often hid from reporters and fans, even going so far as to threaten that she would turn her garden hose on people who came to her house seeking an audience. Today we might call her a bitch. But to quote Amy Poehler and Tina Fey, “bitches get stuff done” and to be sure, Louisa got more done than most. She lobbied tirelessly on behalf of abolition and women’s suffrage. She published over 15 books and many more short stories and essays. As one of the bestselling American authors of the 1870s, she single-handedly supported many of her family members for the rest of their lives.

In this era of carefully curated social media accounts, Photoshopped images, and heavily edited reality television, a view into real women beset by human frailty can be surprisingly refreshing. In The Other Alcott, I’ve tried to portray two talented but flawed women, both of whom pursued her dreams despite much adversity. For if only beautiful, brilliant, witty women can overcome the odds and make something of themselves, where does that leave the rest of us?

Elise Hooper’s The Other Alcott is available from William Morrow. 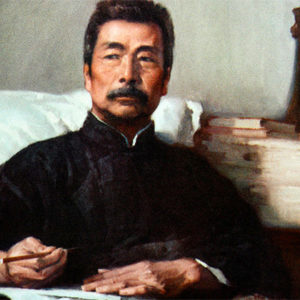 A speech delivered April 8, 1927, at the Whampoa Military Academy. From Lu Xun's Jottings Under Lamplight. * Today...
© LitHub
Back to top