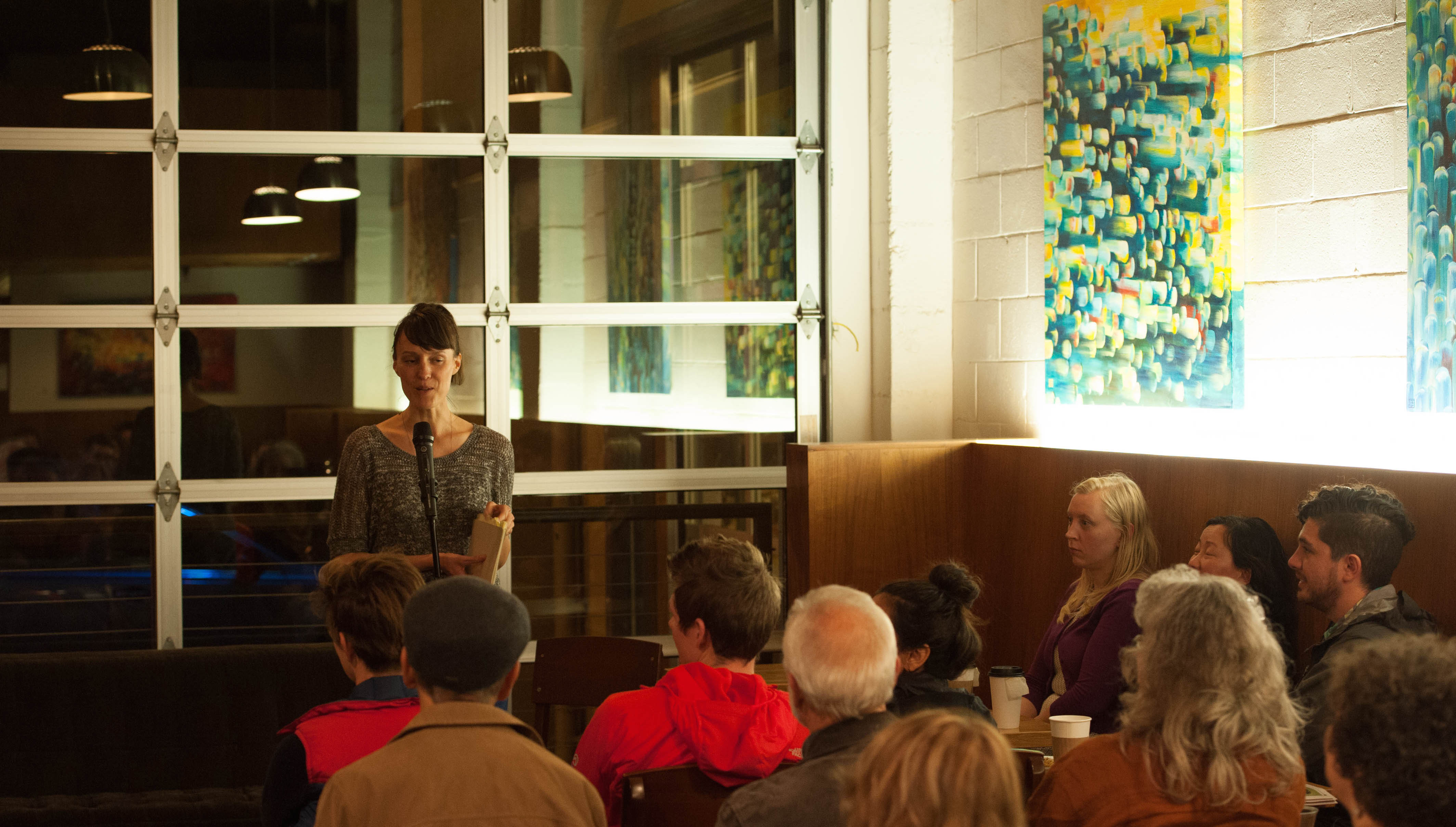 A Decade of Literary Magic in Portland

In May, Portland’s Loggernaut Reading Series celebrated its tenth year with a reading at the Independent Publishing Resource Center. The IPRC, as it’s known, is a literary nonprofit that offers workshops, a shared workspace filled with letterpresses, copiers and computers, one of the country’s largest zine libraries, and a certificate program that the previous director, author Justin Hocking, calls “a punk rock MFA.” Since 1998, the IPRC has equipped Portland’s energetic do-it-your-self literary community and provided a nerve center. There’s nothing like it. Set in a 4,000-square-foot building across from the railroad tracks and a coffee shop, people gathered on this May night under the high ceiling, and we did what we word nerds do: talked, listened and read. We also drank beer.

Loggernaut’s co-founders Erin Ergenbright and Jesse Lichtenstein stood in front of the audience, reflecting on ten years. “We’re excited and surprised we’re still doing it,” Jesse said with a laugh. “It’s been fun, doing these little mash-ups of poets and prose writers, of people passing through and people who have been here a long time.”

Erin grinned and leaned into the microphone. “Was anyone at our first reading?” A few hands went up. That reading, Erin recounted, took place in the back room of a restaurant called Gravy, where they had to hang up a blanket to silence the dishwasher, bring their own amp and speakers, and rent the chairs.

A lot has changed since 2005. As poet Rodney Koeneke said before he read, “The city’s changing so quickly that ten years in Portland is like a century everywhere else.” Before it became a culinary destination, the Rose City was known more for its bands, breweries and bookstores, and its cheap rent attracted many writers and musicians, rather than real estate investors. Tin House, Powell’s Books, Literary Arts and the IPRC still composed the core of literary Portland, and our skyline was built of such towering writers and novels as Katherine Dunn’s Geek Love, Don Carpenter’s Hard Rain Falling, Ursula LeGuin’s Earthsea series, Beverly Cleary’s Ramona books, and Tom Spanbauer’s The Man Who Fell in Love with the Moon, some of which were written during a time when the Ace Hotel was still just the single room occupancy hotel where William Burroughs shot those scenes with Matt Dillon in Gus Van Sant’s Drugstore Cowboy. Erin and Jesse realized how few opportunities there were for writers to publically present their work, so they started Loggernaut. The series changes venues. In March it took place at Ristretto Roasters’ North Portland location.

At the IPRC on this night, fifteen people read, including poets Emily Kendal Frey and Jamalieh Haley, prose writers Jay Ponteri and Peter Rock, journalist Nancy Rommelmann, and fiction writer and Propeller magazine editor Dan DeWeese. Each person read ten sentences, one for each of Loggernaut’s years. As essayist and Perfect Day Publishing founder Michael Heald put it: “Ten sentences is not easy.” Fiction writer Scott Nadelson drove up from Salem, Oregon to read a new two-minute, ten-sentence story. “It’s amazing how much you can obsess over ten sentences,” he said with a smile. “Two weeks of my life!”

The format was fun and fruitful. Pulling lines from larger works can strip them of their meaning, so most people wrote new stuff. The result was an engaging array of comical takes and poetic surprises.

Readers stood between shelves of zines which were draped with maroon curtains and strung with white lights. The audience sat in short rows, or stood among the old presses and work stations. In the front hallway stood a refurbished cigarette machine named The Zine Machine. It dispenses zines.

Justin Hocking started with a passage from a new short story; his memoir The Great Floodgates of the Wonderworld just won the Oregon Book Award, and he’s been writing fiction lately, too. Koeneke went next, followed by poet Alicia Jo Rabins, who read a stunning acrostic, with her baby son strapped to her chest. “Loggernaut was his first reading,” she said. “This is his second Loggernaut. He’s so far, exclusively, a Loggernaut baby.”

Poet Sarah Bartlett read a new cento that she made with fragments from other peoples’ material, which she chose based on songs with the word ‘ten’ in the title. She called it “Ten Cento, or In Case You Are Wondering If I Ever Used You For Sex.” The last line: “Whip out my big ten inch and leave the haunted behind.” Her sources included everyone from Led Zeppelin to Drake. People loved it.

The audience was filled with IPRC graduates and instructors, writers and college professors, editors from Bitch magazine, fiction writers Kevin Maloney (local press Lazy Fascist published his first book, Cult of Loretta, in May) and his partner Tanna TenHoopen Dolinsky (she writes and also runs the kickass vegetarian food cart Wolf & Bear’s). Future Tense Publishing founder Kevin Sampsell was there with performer and Back Fence PDX producer B Frayn Masters. Blake Nelson was nibbling pasta. Blake wrote Girl and Paranoid Park, which Gus Van Sant turned into a movie. In a twist of fate, he and Nancy Rommelmann went to college together back east. He used to work at Powell’s back in the day. I did too, though unfortunately our time there didn’t overlap. He’d be fun to work with.

Loggernaut attracts a smart, friendly group. As Peter Rock told the audience after his reading, “One of the great pleasures of being here is meeting Facebook friends for the first time. And now they can be my real friends.” He also said, “I think I read at the second Loggernaut, so it was about ten years ago, and I haven’t really left my house in that time.” As a hermity writer myself, I can relate.

After an intermission, memoirist and fiction writer Robin Romm read hilarious haiku based on her neighborhood listserv. In classic Portland style, subjects included:

Old-timey aesthetics: “All children deserve to have names common in 1871.”

Over-polite drivers: “At the four-way stop everyone nods, smiles, gestures. You go. No, you go. ”

And livestock: “We’ll be weaning our urban goat herd this month. That’s what the noise is. ”

The audience laughed hard. Some of us are these people. Then again, literature helps you see yourself in others, and others in yourself, as well as your goat.

Emily Kendal Frey read a published poem called “Frances. ” She prefaced it by saying, “I tried to write a new thing and it sucked!”

When prose writer Don Waters took the stage, he told the crowd that the new things he wrote for us had also sucked, so he went back onto old computers and created what he called “Ten First Lines from Ten Failed Novels from My Twenties.” “And, ” he added, “these are real!”

One line: “A month after Dad died, Mom fell for another: a slot machine called Moula Rouge.”

Another line: “The five septuagenarians congregate nightly in the TV lounge, Mafia-like, gumming their cherry-flavored Jellos and plotting about what to do about Frank.”

Another: “Someone downstairs yells drunkenly, ‘Life is only fair if you like riots.’”

Don threw his hands up and faced the crowd: “That doesn’t even make sense.” People erupted in laughter. His comedic self-sacrifice made it seem like a literary version of Mortified.

Loggernaut used to interview visiting authors who came to town—Paula Fox, David Means, David Shields, Daniel Alarcón, Jim Shepard—but good interviews take so much time that they haven’t done any in a while. After the March reading, Jesse told the audience, “If you want to interview someone, let us know!” So if you’re reading this and interested, contact them. Gary Shteyngart once interviewed Sam Lipsyte for the Loggernaut website. The interview was the first time that Shteyngart and Lipsyte had met, which is funny, since you’d think they would have met at a reading where they live in New York. Instead, they came to the opposite coast for a group of passionate Portlanders to introduce them, just like the Series staff does for people in the audience.

After fiction writer Mary Rechner read, new and old friends hung out and drank beer, talking about current writing projects, favorite books, and summer plans. Widmer donated a keg. It’s Portland. We do books and beer equally well, and around here, you need summer plans. The dark clouds part too briefly to let the sunny months go to waste, especially for productive writers who keep themselves seated for long hours at their desks.

Aaron Gilbreath has written essays and articles for Harper's, The Paris Review, The New York Times, Kenyon Review, The Believer, Tin House, The Threepenny Review, The Morning News, Vice and Longreads, and wrote the musical appendix for The Oxford Companion to Sugar and Sweets. He used to work at Powell's Books. @AaronGilbreath 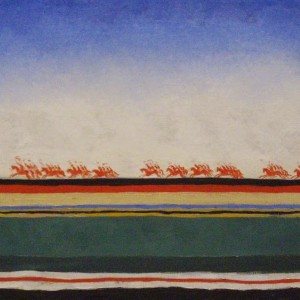 Memorial Day as summer’s gateway is a relatively young notion. A federal law moving the holiday to the last Monday of the month...
© LitHub
Back to top