Literary or Genre, It’s the Plot That Counts

Emily Barton on the Importance of Moving a Story Forward

We writers like to talk about elements of craft. Character, theme, setting, voice, point of view, language. But I seldom hear fellow writers talking about plot. When I first taught a seminar on non-traditional plot construction at NYU’s Graduate Writing Program, some students signed up because they hadn’t previously given the topic any thought. John Barth quotes Norman Mailer as saying that he tended “‘to mumble about technical matters like an old mechanic.’ ‘Let’s put the thingamajig before the whoosits here,’ said Mailer, ‘is how I usually state the deepest literary problems to myself.’” Against that strain in the culture, my students and I worked to build a vocabulary to talk about plot. We learned to separate plot from action, actual story from mere stuff that happens. We learned to diagram the motions of both, separately and together.

Plot tends to get associated with “non-literary” genres. Action-adventure, mystery, and crime stories rely heavily upon it. Literary novelists, one might gather in a typical writing workshop, should consider ourselves above the cheap tricks of suspense. Those of us who aspire to write highbrow fiction (whatever that is) do not resort to the ironic ending in which a woman sells her hair to buy her man a watch fob at the exact moment he sells his watch to buy combs for her hair. Instead, a workshop may teach a young writer to rely upon language and sentence structure, the depth of her insight into human nature, and weighty themes. And a good story—high-, low-, middle-, or whateverbrow—employs all those elements of craft.

But any reader can tell you that this bias against plot is nonsense. Books depend upon plot. It is the armature upon which everything hangs. Self-styled intelligent readers read for plot every bit as much as those who plow through mass-market paperback thrillers and romances do. (Also, in many cases, those readers are the same person.) I am currently reading Alexander Chee’s Queen of the Night. I admire Chee’s lavish prose and the exactness of his research, his nuanced portrayal of his main character’s subjectivity. At the same time, I keep turning the pages because I am dying to know what will happen to Lilliet Berne. H is for Hawk, which I just finished: Holy crap, this woman seems on the verge of a nervous breakdown and just invited a TRULY WILD ANIMAL to live in her home. Helen Macdonald’s prose style also enthralls me, but she could hold my attention with much plainer sentences simply by telling me what Mabel the goshawk did next.

A few writers I admire have publicly grappled with plot—the bias against it, and how to talk about it. Michael Chabon’s essay “Trickster in a Suit of Lights: Thoughts on the Modern Short Story” encourages writers and readers to think away from the middle-aged-white-guy-experiences-enlightenment story we’ve come to think of as “literary” and toward the glitz and drama of every other kind of story: adventure, fantasy, tales of the macabre, and science fiction among them. Chabon himself is a great genre-bender; you see why his mind would turn that way. In “The Perfect Gerbil,” George Saunders walks us step by step through reading Donald Barthelme’s notoriously inscrutable story “The School.” Here’s what he says about plot:

A story can be thought of as a series of these little gas stations. The main point is to get the reader around the track; that is, to the end of the story.

That is, a story is a series of engines whose job is to move the plot forward, not a display case for statically showing off the brilliance of a writer’s views on human nature.

One thing I do as a teacher is help writers see plot as central to the functioning of their machines (aka stories). When your characters sit around at coffee talking about stuff, that usually isn’t a plot, though a tense dinner scene might help drive it forward. Once students have grown comfortable with diagramming, I encourage them to build—literally build—other kinds of visual and mnemonic models of stories they read and of things they want to write. Describing Sesshu Foster’s Atomik Aztex, a novel with a complex, non-linear plot, one student built an elaborate, three-dimensional, color-coded pipe cleaner construction, while another fitted a brad into the holes in a CD and a disk of paper, thus connecting them so they could spin and line up with each other in multiple ways. Model-building is not a common tactic in fiction programs, so sometimes this new angle helps a student see what had previously seemed an intractable problem in a different light.

In his essay “Incremental Perturbation: How to Know Whether You’ve Got a Plot or Not,” Barth writes that a “story’s middle performs its double and contradictory functions of simultaneously fetching us to the climax and strategically delaying our approach thereto.” That is to say, a story’s rising action wants to barrel forward as fast as it possibly can, and pull back on the brakes (via various stalling tactics) as long as is likely to give the reader delight.

I’m interested in that tension between the plot’s forward momentum and the perverse pleasure of delaying arrival as long as possible. My new novel, The Book of Esther—a Jewish feminist dieselpunk alternate history of WWII—works that opposition on a structural level. On its surface, the book is an adventure story, but its preoccupations run deeper: What does it mean to be a person? How do golems and cyborgs fit into such an ontology? What kinds of roles do women fulfill in Judaism? What would the state of Israel be if there had been an autonomous Jewish state in Europe since the fall of Rome? So in this book I am always making the plot gallop forward—battles! Etc.—and figuring out, at the same time, how long I can dawdle while the characters talk about and enact these kinds of philosophical questions.

Yet even though I was thinking about these issues, the first draft had slack in one line of the plot. I knew from the start that Esther wanted to be changed into a man by Kabbalistic magic so she could fight for her country. What initially seemed logical was for her desire to serve to line up with her sexual orientation, even though she lived in a society (an invented Rabbinical culture) unlikely to be LGBTQ friendly. So early on, Esther longed to escape being a woman for all kinds of reasons, one of them that her sexuality attracted her to women as well as men.

As I progressed through drafts of the novel and got to know it and her better, I began to notice, however, that from plot’s point of view, Esther’s plight had insufficient friction; or, it might be more interesting if her goals stood more squarely at cross purposes to her desires. Writing fiction can be weirdly sadistic compared with everyday life. Things I want for myself include enough sleep, a healthful lunch, and for my children to grow up kind-hearted and happy. My characters should encounter as many threats and disappointments as possible because an even-keeled life is the enemy of plot. As the old curse goes, “May you live through interesting history.” To put this in Saunders’s terms, I wanted to complicate things for Esther by powering up her gas stations.

Over time, I realized it was more fruitful for Esther’s mission to stand at odds with her desires. In stories of a young woman rebelling against her fate, the default position is for her to despise her future husband. In order to push against generic expectations, I began to think it would be more interesting if Esther’s fiancé was a good person, a good choice for her, someone she unequivocally liked. Then her desires for herself are at odds with each other. In the book’s final incarnation, the question for the reader isn’t only, “Can this girl turn by magic into a boy?” although I would be interested to find that out, if I were the reader. The question morphs into a series of questions, such as, “Can this girl turn by magic into a boy, and if she does, will she be glad for her country but unhappy that she can’t marry the nice guy? Or could she maybe, having changed once, change back again? Might she regret it more if she doesn’t manage to change at all and achieve her worldly goals?” These questions involve struggle, like most of the big questions we wrestle with in our own lives. And readers like to witness and participate in that kind of struggle. It involves more imaginative participation—higher collaborative stakes—than a fantasy not grounded in our common humanity.

So my main character fell out straighter than I thought she would, which I regretted, what with there already being so many straight protagonists in the world. (Though all that thinking about her potential queerness manifested elsewhere in the story, in a different character’s storyline.) At the same time, the narrative grew richer because of how this decision affected the plot. Letting Esther approve of her chosen husband also affects the outcome of the book’s magic. In our world, magic seldom works, and in fantasy, once you invoke it, it usually does in one way or another. But given my character’s ambivalence and conflict about what she wants the magic to achieve—and given my inborn predilection to thwart the expected—what if the magic . . . sort of worked and sort of didn’t, depending on how you look at it? That brings complexity, nuance, and the all-important friction to an area of the plot that might otherwise seem predetermined or flat.

“Thingamajig” and “whoosits” may help us pinpoint problems with our plots. But as terms of art, they fail us more often than not, which I suspect was part of Mailer’s point in making that self-deprecating remark. Moving beyond such mumblings—at least to a place of being able to name what’s plot and what isn’t, and to understanding that the function of plot is both double and self-contradictory—has allowed me to see various structural dilemmas from a more dispassionate point of view. It let me construct the plot and action of this novel in ways that serve the story itself and the reader’s potential involvement in it.

Sometimes both writers and readers feel guilty for loving plot, or even fear it, because it seems unsophisticated. But in our hearts we know better. Plot is the very thing that keeps us turning the pages, rapt in the fictive dream. It is a more subtle instrument than we may at first suppose it to be—and regardless of its subtlety, deserves our respect and attention. Once you understand that plot comes first and everything else is built around it, you can begin to think more nimbly about how it functions. Then the question of how many times the characters can go out for coffee vanishes.

Emily Barton is the author The Book of Esther, Brookland and The Testament of Yves Gundron. Her essays, short stories, and reviews have appeared in Story, Conjunctions, The Massachusetts Review, Tablet, The Los Angeles Times, and The New York Times Book Review, among many other publications. 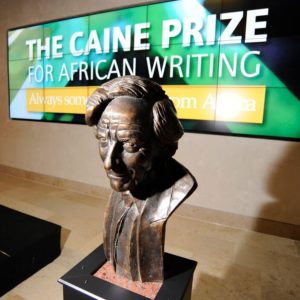 This essay has been adapted from a piece originally published in the second volume of Oduor Oduku's KUT Anthology.  It’s...
© LitHub
Back to top