In this episode of Fiction/Non/Fiction, V.V. Ganeshananthan and Whitney Terrell talk about “sensitivity reads,” cross-cultural writing, and the lack of diversity in the publishing industry with author Dhonielle Clayton (COO of We Need Diverse Books and co-founder of Cake Literary), and agent Ayesha Pande (Pande Literary). In the first half of the show, Dhonielle talks about her own career as a sensitivity reader—or, as she prefers, a “targeted Beta reader”—and discusses her concerns about a recent New York Times article on the subject. Then longtime editor and agent Ayesha Pande explains how the lack of diversity in the ranks of editors and agents affects writers of color.

In an Era of Online Outrage, Do Sensitivity Readers Result in Better Books, or Censorship? by Alexandra Alter, New York Times, 12/17/17

Ralph Ellison, “Twentieth-Century Fiction and the Black Mask of Humanity” (essay). From Shadow and Act.

First of all, I hate the term sensitivity reader. I prefer the term targeted beta reader because it’s more accurate. Because what I do is I go through and I read for a specific thing, specific representation. So that’s first off. I hate that term because I’m not being sensitive. What I’m doing is I’m using my critical thinking skills, and I’m using my ability to analyze, to look at different structures in books and different items that reflect and telegraph and communicate culture, and if you’re asking me to read obviously it’s because you have written someone who comes from my background, and that’s what I’m looking for. So first of all I hate that term. I’m not being sensitive. I’m just an editor and it’s another level of editing.

Dhonielle Clayton on being honest on the page…

I read a picture book… This was one where they wanted me to read for the black representation in the book even though it was about a white man. And they kept talking about segregation this and segregation that, and I said in there in one of my notes, I said, you’re laying out segregation as if it’s something that was chosen by both white Americans and black Americans, and you’re not addressing the power dynamic. You keep bringing it up as something that keeps these two groups of people away from each other, but you’re not being clear, you’re not telling the truth on the page. This was set up by white people in the South. So you have to reconcile with what that means to a friendship of two boys. And you’re showing this on the page, you have to be honest.

Dhonielle Clayton on grappling with power in publishing…
But we do have to grapple with this idea of power and nobody wants to talk about that and that’s the piece that I think really touches people’s nerves… There is a power difference. It’s not about—people are like, Oh, you want to police who can write who. No. Everyone should write what they want to write. I want to write what I want to write. Writers should feel free to do that. It’s about the system of publishing. That’s what I’m talking about and calling out and being honest about. It’s not about us as authors and the way that we write. It’s about how our manuscripts move through this machine. They move differently. And nobody wants to talk about that part. But yes, I can write cross-culturally and I can write and do these things, but when my manuscript and my book enters the marketplace, that’s when we have to grapple with this sort of institutional discrimination, and how there are certain people that get their manuscripts through easier, even when they are writing outside of themselves, than when I write from my own point of view. So nobody wants to really talk about that, and that’s the issue that I had with the New York Times piece on this.”

Ayesha Pande on pigeon-holing writers of color…
My clients have been impacted by the lack of diversity in quite a number of different ways. For one they’re always being compared to the one successful writer with whom they share a cultural or ethnic background, being asked to write a book, quote unquote, in the vein of Ta-Nehisi Coates or like Roxane Gay or Angie Thomas, YA author of The Hate of U Give. The industry seems to have a tendency to glom onto and elevate the very few successful voices by people of color and think of them as representative of their entire community, as if there was only one African American or one Latino community, and not really acknowledge the broad range of voices that deserve to be heard. So being shoved into a narrow pigeonhole is one issue.

Ayesha Pande on the elusive idea of “relatability”…
And then there’s this issue of relatability that you mentioned. I was looking over some responses to a recent submission of this amazing novel by an Asian author—whom I don’t want to name in this podcast because her book is still on submission—and the book is set in the country of her birth, and she is in my opinion one of the most promising and talented writers out there right now—a big prize-winning kind of talent.

So here are some of the comments that we got. “I couldn’t connect with the voice.” Well, the voice is very much in the dialect of the country where she’s from. It’s not really hard to understand or to follow, but it’s just very distinctive to that part of the world. Another comment was: “I found it difficult to know the characters and to slip into the story.” Another: “The narrator’s voice made me feel distant from the characters and I found myself reading it in a more intellectual mode than an emotional one.” Another: “I didn’t find the emotional traction.” Another: “I didn’t connect with the characters on a deeper emotional level.” So to me it felt like the writers have this responsibility to create characters that white editors can connect with emotionally. Speaking just for myself, I tend to connect emotionally with characters who in some way mirror my own experiences or things that I’ve had to struggle with. In my case, for example, being an other, an outsider, an immigrant, a woman of color. So, as much as we talk in the industry about universal themes, we all yearn to have our own lives reflected in the books that we read. And so it makes sense that white editors, who also mostly stem from a rather narrow privileged background, would be more drawn to characters in whom they can see themselves. And I feel that that’s really a big problem.

V.V. Ganeshananthan on coded racism in classic children’s books…
It’s a lot of fun for me to talk to children about books. And it’s really upsetting for me, especially when I think back to books I loved as a kid, and I realize I actually wouldn’t recommend some of these books to the children who read in my vicinity, because they have racist stereotypes in them. You know, The Horse and His Boy for example. I remember as a child loving that book which is about these two brave kids and their friendship—and it has all this coded stuff in it about swarthy evil men. It’s in the Narnia series. I didn’t even remember it and then I went back and read it as an adult and was just horrified.

Whitney Terrell on trying to get it right…
I was unaware of the practice of sensitivity reads, but it’s just the same as what I do with friends basically. Or when I was embedded in Iraq, and I wanted to write about the military, I spent a lot of time getting to know soldiers, and then I would ask them to read the book, you know, and I would ask them specific parts. Well, how does this machine work, did I get it right, would you use this tool here, that sort of stuff. It just seems like the natural process of writing a book to me.

This week, the Fiction/Non/Fiction book recommendations come from Abby Fennewald, Director of Marketing and Publicity for BookPeople.

Marriage of a Thousand Lies by S.J. Sindu
*
Bluebird, Bluebird by Attica Locke
*
Everything Here is Beautiful by Mira T. Lee

Do Audio Books Count As Reading? 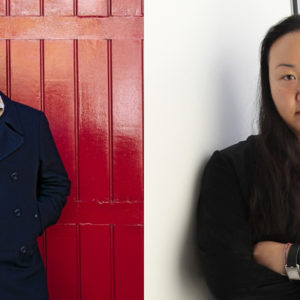 Hanya Yanagihara: Well, I suppose I’m going to begin with the obvious. Your brilliant novel is—in title, structure, and fury—deliberately...
© LitHub
Back to top