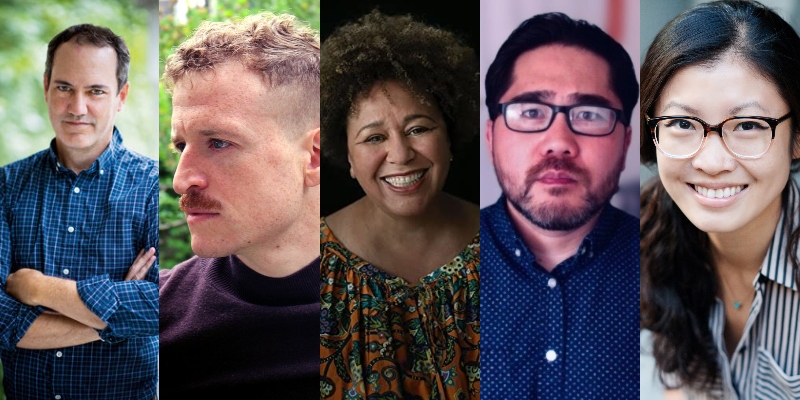 Evan Hughes (The Hard Sell: Crime and Punishment at an Opioid Startup)

Sequoia Nagamatsu (How High We Go in the Dark)

Evan Hughes: Power, greed, sex, betrayal. How ordinary people come to do very bad things. Sales and persuasion. How prescription drugs are marketed and sold. What happens when health care is governed by the profit motive.

Sequoia Nagamatsu: Funerary practices. The threads that tie us together in the universe. Reimagining grief. Community and catharsis in unexpected places. Imagining the future. Climate change. Hard choices with family. A love affair with the stars. Asian characters where Asianness isn’t the focus. A pig. Possibility.

Evan Hughes: HBO’s Succession, if that’s not cheating. Courtroom drama. The techniques of absorbing fiction brought to a nonfiction account of corporate crime.

Sequoia Nagamatsu: Star Trek (particularly “The Inner Light” episode), the Cosmos series, pseudo-science/history documentaries, hippies at forest camp outs who told me alternative origin stories of the Earth, 80s music (including Starship), the evolution of virtual reality, scientists poking at things in the ice, The Album Leaf (band), “The Planets Suite” by Gustav Holst, my own losses, being a text-book Capricorn, living in Japan for a few years.

Weike Wang: Absurdism, stereotypes, fighting against forces you can’t see, the comedy of bureaucracy and being part of a larger system for better or worse.

Nikki May: Long loud lunches, Mama Ofada’s food shack, an embarrassing email-gate episode, Net-a-porter, a yen for a lot of drama in my drama, and my husband’s very dark mind.

Andrew Lipstein: My own failures with writing; a loved one’s illness; a frustrating but illuminating series of conversations I had with a coward.

Sequoia Nagamatsu: Lonely and grieving in a Japanese apartment. A long-distance relationship while charging housemate’s crystals in a kind of commune. Drama and dwindling family members I could actually call.

Andrew Lipstein: Clippings from my diary the week I started Last Resort: “lack of sleep” / “upset stomach” / “i disgruntledly made us breakfast and i was in a terrible mood” / “on friday i was feeling surreal, or calm, and i came home and started a new novel” / “sleep deprived” / “i fell asleep in my clothes, which i never do” / “i have to just chill out”

Evan Hughes: Becoming familiar with every travel plaza on the Massachusetts Turnpike as I drove back and forth a ton between the Hudson Valley and Boston to cover the criminal trial featured in the book, which lasted over three months. Raising a child. Living with a car, a house, and a yard after many years with none of those things in NYC.

Nikki May: Dog walks, box-sets, a house burning down, falling out of love with advertising, craving a new beginning, and reading a lot more than usual.

Weike Wang: Lots of Zoom, dog walks, online shopping and trying to get my grandmother back to China (where she lives) during the height of pandemic.

Andrew Lipstein: I’d always rather fail for being too ambitious than properly execute an easy idea, so I didn’t like when Publishers Weekly, in a very mixed review, called Last Resort “tepid.” (It also abuts the term “fluidly written,” and the combination of the two words—tepid and fluid—made me lose my appetite.)

Sequoia Nagamatsu: Prescient and prophetic (and I get why . . . but I also, for obvious reasons, don’t want people to get the wrong idea).

Weike Wang: I try to avoid reading reviews and reader comments so I’m not too sure. But I imagine some have found my writing cold, harsh, robotic, confusing, boring, too science-y, too Asian, or not Asian enough, drawing from my personal experience of what I’ve been labeled as.

Nikki May: “Soapy.” “Slow.” And worst of all—“Unbelievable coincidences.” I mean really! Who wants to read a book about normal, dull lives?

Weike Wang: I have a doctorate in epidemiology from Harvard. Given the ongoing situation, I probably could’ve found work. Being a writer was an inevitability that I had not predicted.

Sequoia Nagamatsu: I was (and still am) obsessed with all things space related. I wanted desperately to be an astronomer when I was younger, but I am sadly terrible at math. I can imagine other worlds in my stories, but how amazing it must be to actually help discover them.

Evan Hughes: I think I’m good at telling an engrossing true story while also being scrupulous with fairness, facts, and sourcing—those two goals can be at odds. I think I could be better with scenic description that isn’t essential to the narrative but can be useful; sometimes in my reporting I forget to ask what the sky looked like that day.

Nikki May: I’m good at characterization—I work hard at it, when I printed out my character excel spreadsheet, I needed 40 pages of A4). And I’m pretty strong on dialogue. But I’m terrible at structure—I start off with a plan, write myself out of it and end up terribly confused. Unfortunately, this happens pretty much daily.

Andrew Lipstein: I find first person thrilling, because, as my protagonist Caleb Horowitz says, it allows “flaws to show, if not unintentionally.” I think writing is a lot like acting, in that once you really believe what the character believes, you can convey their truth in ways that transcend your own abilities. In my third book (my second, forthcoming, is also first person), I want to write in third person, because I find it terrifying.

Weike Wang: I can hone a sentence down to the bone. I can be subtle, nuanced but sometimes too much so. I don’t think I could ever be long-winded, though I deeply wish to be.

Sequoia Nagamatsu: I think I’m pretty good at drawing out emotion in a moment and finding the poetry in darker experiences without dragging a reader into the depths too much. Like a lot of writers who have been through MFA programs, I’d say that I still need to work on plot in a way that doesn’t feel like a schematic. I’ve gotten better with this, but I still need to allow myself to roam and not be so methodical. One day I’d like to write a legitimately happy and/or laugh-out loud story.

Weike Wang: Ha. Question I’ve been asked a lot and also what I ask myself each time I sit down to write. This is probably why I’m not long-winded. Fear of having nothing to say. Fear of wasting your time.

Sequoia Nagamatsu: I don’t. My work is just another looking glass, funneling the world and dreaming other worlds and experiences with a dash of my own personal baggage. And maybe if other people find some point of connection, some enjoyment or catharsis from my realist or fantastical interpretations of how we are the way we are then that’s great (and I’ll totally celebrate that).

Andrew Lipstein: I like to occasionally inure myself by thinking of the worst response to my work. I imagine what the exact wrong reader might think of it (often someone I know personally).

Evan Hughes: This is usually a tough one that I wrestle with a lot, but in this case I covered an important criminal trial, with lasting implications, that cracked open the way opioid makers do business. There was significant media attention from national outlets, but I was the only member of the media who was there every day, and the only one producing a written account of this depth.

Nikki May: I read a very badly written book and realize I’m not the worst writer in the world.

Violent Currents and Heads on Fire: Readings by Scott Mitchel May, Adam Ai, and Claire Taylor 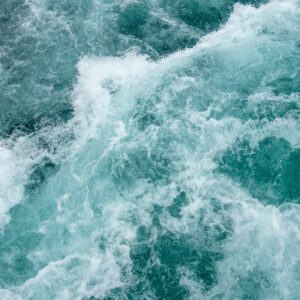 Violent Currents and Heads on Fire: Readings by Scott Mitchel May, Adam Ai, and Claire Taylor