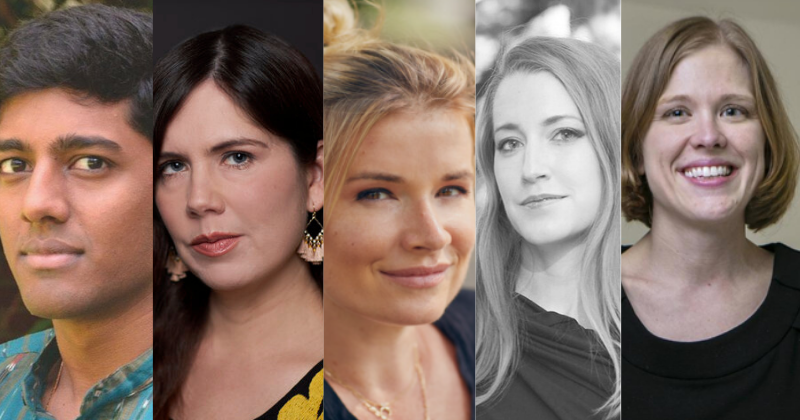 Kristen Radtke (Seek You: A Journey Through American Loneliness)

Caki Wilkinson: It’s a collection of poems about growing up, the people we stick with and are stuck with, and the strange, occasionally thrilling ways we organize our lives to make them livable.

Elizabeth Gonzalez James: Desperation, anger, boredom, the lies at the heart of capitalism, lost memories, self-harm, watching someone gain the courage to go after what they really want, and cheese enchiladas.

Kristen Radtke: The book is an argument for community and why we need to use loneliness to propel us toward one another.

Elizabeth Gonzalez James: Leonardo da Vinci, the feeling of getting inside a late-model Mercury with faux leather seats that’s been baking in the sun all afternoon, realizing too late that you’re drunk, Anderson Cooper, the bathroom soundtrack at Macaroni Grill, Suze Orman, and the forced geniality of call center workers.

Kristen Radtke: I figure out most of my projects by having agonizingly long (for them) conversations with my husband and two or three close friends; their thoughts and observations influence me enormously. The project started with people watching, when I began drawing strangers who were alone in public. It’s cliché, but New York was of course an influence.

Anuk Arudpragasam: The long history of violence, death, survival, yearning, and resilience in the land of my ancestors.

Elizabeth Greenwood: Vending machine feasts of candy bars and chips in prison visiting rooms. A desire and responsibility to turn stereotypes on their heads. Going from crying to laughing to crying again. Prison wife memes—they are the best, do yourself a favor and look some up. Learning how to conduct an interview in 15-minute prison phone call increments and in front of guards and over crappy video chat connections.

Caki Wilkinson: A lot of teaching and meetings. The fits and starts of the academic calendar. Many hours of dog walking and driving and watching basketball and writing things that didn’t end up in the book. An obsession with the world’s hottest chili peppers. Four guided tours of Graceland. Literal and metaphorical ant farming.

Elizabeth Greenwood: Re-learning myself as a writer and a person after becoming a mom. Constantly negotiating and questioning the appropriate boundaries with my subjects. A newfound appreciation of the US Postal System. Learning about love at home and at work. Getting married. Two pregnancies Moving. The jujitsu of childcare and scheduling—the full catastrophe, as Zorba said, and thank goddess for it.

Elizabeth Gonzalez James: People tell me my writing is dark, but I feel like I’m just writing about the world around me. Maybe others don’t live in a world with people who cut themselves and people who collect roadkill and people who fish dead bodies out of ponds and cats who realize they’re living in hell and teenagers who wander into a parallel universe on their way to Circle-K, but I do.

Anuk Arudpragasam: There are words people can use that are ugly, demeaning, and even humiliating, but I prefer not to spend time thinking about them. There are enough ugly sentiments in the world without my repeating them.

Caki Wilkinson: Despise is maybe too strong, but I’m not crazy about “clever” or “droll.”

Kristen Radtke: Almost every writer has another career to support their writing; I love being an art director. I would also like to get paid to play with plants.

Caki Wilkinson: I’d be the coach of a Cinderella team—every year, a different Cinderella team who takes down a dynasty in the championship game. Either that or an old-timey private eye.

Elizabeth Gonzalez James: I would be an exceptional wedding DJ. I’ve seen so many hapless fools crash and burn when I feel like the job is unbelievably simple. You play your Usher, you play your Sister Sledge. If you’re down south you play your Garth Brooks or, if you’re really down south, your Daddy Yankee. You let the songs finish (don’t cut out “I Wanna Dance With Somebody” before she gets to “Don’t you wanna dance”!) If the bride’s okay with it, play the “Cupid Shuffle” so the kids can dance without feeling awkward. Under no circumstances should you ever play “Girlfriend” by Avril Lavigne unless you know for a fact that the bride murders puppies for fun. And always finish with “Livin’ on a Prayer.” Et voila—a perfect night.

Elizabeth Greenwood: I’d love to be a spy/international woman of mystery but I’m subtle as a T-Rex and would give up state secrets if tickled.

Anuk Arudpragasam: I’m not sure I would, to be honest.

Anuk Arudpragasam: The things I care about I do well, I think, and the things I have no patience for I try not to do at all. If my writing is going to improve, it is going to come not from advances in craft so much as advances in my will and vision.

Kristen Radtke: Depends on the day, but generally I’d like to be better at everything, especially color and drawing from memory.

Elizabeth Gonzalez James: I think I’m really good at setting and establishing place. I can get really into the smells, the sounds, the mood of a room, the ambient temperature, the background chatter. When I write I always have this sort of movie running in my head, and I love writing what, in a film, would be an establishing shot. Then I like pulling the camera back and doing a God’s-eye-view, popping down on this person and that one. I would probably do a whole story like that if I could get away with it.

Elizabeth Greenwood: This might be a strange answer, but I think I’m good at tone. The subjects I’m drawn to are about paradox—love and freedom within confinement; being born again in this life while holding on to your body. Inside all that, there’s a lot of sadness and suffering, but also joy and even comedy. I try to convey the (sometimes conflicting, sometimes in chorus) full spectrum of those emotional experiences. I’d love to snazz up how I structure books and articles.

Caki Wilkinson: I’m good with form and character—or at least those are the things I need to figure out before a poem gains any momentum. I have a pretty strong narrative impulse, so I’d like to be better at compression and leaps and other lyric moves.

Elizabeth Greenwood: I try to remember it’s often the wrong people who doubt themselves.

Anuk Arudpragasam: If I spend most of my time writing, it is because I haven’t found any other activity that enriches my life the way writing does. If I publish what I write, it is because publishing allows me to keep writing, not because I think anyone should be interested in what I have to say. I’m not even sure I have anything interesting to say: if I did, why wouldn’t I just say it and be done?

Elizabeth Gonzalez James: For the most part I don’t think anyone really does have any interest in what I have to say, and so I don’t really have any hubris to contend with. I was raised to be pretty humble and keep my head down and do as I was told, and so even having the courage to step up to the microphone was, and continues to be, a big deal for me. I truly can’t imagine any scenario where I magically get over my insecurity and lack of assertiveness and become this big blowhard, although that would be pretty funny.

Kristen Radtke: Every single person on the planet has something interesting to say.

Caki Wilkinson: I’m a poet, so I just assume nobody’s listening very hard. Then I try to charm them into paying attention. 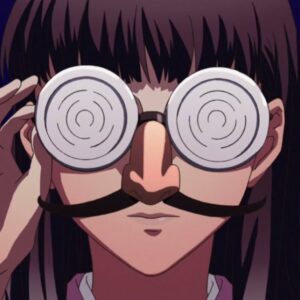 Rose Lanam is the name of my alter ego. I conjured her up in order to write my new novel, The Startup Wife, my fourth book...
© LitHub
Back to top