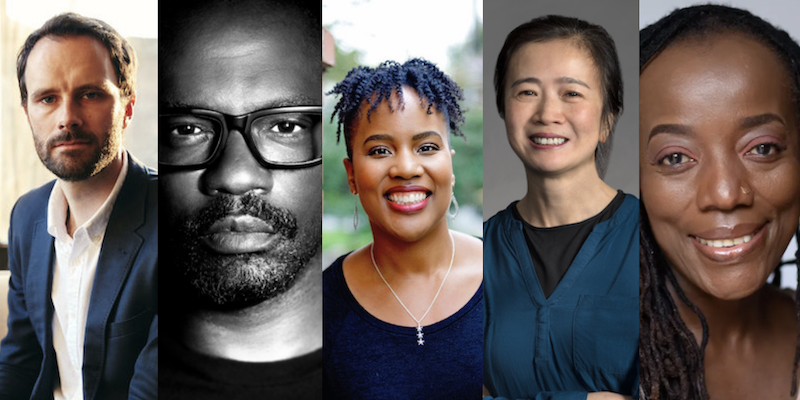 Brian Broome (Punch Me Up to the Gods)

Tsitsi Dangarembga (The Book of Not)

Julian Sancton (Madhouse at the End of the Earth: The Belgica’s Journey into the Dark Antarctic Night)

Linda Rui Feng: How to improvise a life. The fluidity of where we call home. The resilience of the imagination. How the titanic forces of history precipitate in smaller, more recessive lives.

Julian Sancton: Man versus Nature. Romance versus science. Genius versus flimflam. Orthodoxy versus intuition. Hope versus despair. The connection between the highest latitudes of Earth and the furthest recesses of the mind. And in an allegorical way, though I wrote it largely before the pandemic and it takes place in the 1890s, it’s about the fear and anguish we’ve all gone through in the last year.

Brian Broome: The desperate need for acceptance and the lengths we’ll go and depths we’ll sink to in order to get it. Or some semblance of it. And about the power of shame and self-loathing. Also prostate exams and JNCO Jeans.

Tsitsi Dangarembga: My book is about how the intersection of colonialism, patriarchy and class struggle creates a formidable force that black girls must struggle against, often without access to role models, in order to be.

Monica West: Faith, feminism, family, patriarchy, and power. It is also about disillusionment with religion and unlearning everything you previously thought to be true.

Brian Broome: Pie was the main influence. There’s a store just up the street from my house and I promised myself that whenever I finished writing a particularly difficult chapter, passage, or sentence, I could walk up to the store and reward myself with pie. That pie canceled out any other influences. I loved that pie.

Linda Rui Feng: The nature of obsessions and secrets. The mysteries of how and why music captivates us. Everyone who talks about what it’s like leaving their native country.

Tsitsi Dangarembga: Books that influenced me were those that reached out in style and in ambition to places not often narrated, that have a bearing on the experience of living in a category constructed as being in opposition whiteness and all that whiteness signifies. I was drawn by books that speak about pain and voicing pain as trauma rather than personal insufficiency or victimhood. I was influenced by the grand narratives I have read, that throw the societal into relief through dissecting the particular. There are increasingly fewer narratives of that nature available to me these days and so I read a lot of nonfiction.

Monica West: Growing up female in a patriarchal religious structure, the divide between feminism and faith, an obsession with how people remain devoted to things that oppress them.

Julian Sancton: Space travel. Gothic horror. Indiana Jones. Belgian comic books. Birdwatching. J.M.W. Turner. The Danish String Quartet. Sailing in Sweden with my father-in-law. Winter weekends on a frozen lake in New Hampshire. Some of these influences are more direct than others.

Julian Sancton: The continued miraculous development of my young daughters; the awakening of my passion for birdwatching (see above); a mind-numbing, Cheeveresque commute on Metro-North that nonetheless gave me an hour and a half every morning and night to work on the book; a global pandemic; gradual hair loss.

Monica West: Teaching high school English, moving, getting my MFA from Iowa, falling in and out of love.

Linda Rui Feng: Questions and doubts about vocations and advocations. Conversations about physics. Struggles to make time for writing.

Tsitsi Dangarembga: Not a novel, meanders all over the place, trips over itself, almost too meta. There aren’t that many. There was something once about my metaphors. I tend not to pay attention.

Linda Rui Feng: About my short stories: “this should be a novel instead.”

Brian Broome: My mother calls them “your stories.” One day I’m going to have a word with her about calling my writing “your stories” because that’s the same thing she used to call the ridiculous soap operas she watched where people got amnesia every week and everyone had a secret evil twin.

Julian Sancton: There’s been “melodramatic” (what’s wrong with melodrama?); “sensational” (that can be read two ways); “sober” (wait, I thought I was melodramatic and sensationalistic!). Other than those, there are a few flattering words that I don’t dislike per se, but since you never see them outside of reviews, they sound insincere and devoid of meaning to my needy writer’s ears. I’m looking at you, “riveting” and “rollicking.” (Note to reviewers: please ignore the above and feel free to use “riveting” and “rollicking.”)

Brian Broome: OnlyFans if I still had the looks. But I’m afraid that ship has sailed.

Linda Rui Feng: Architect (because I love the idea of building with something other than words). Mushroom hunter (because the world of fungi makes my jaw drop). Volcanologist (to see the earth being shaped in front of your eyes). Free diver (since talent is no prerequisite—and how cool would that be?).

Julian Sancton: Before researching this book I would probably have said “polar explorer.” Now, I don’t know. Ornithologist? Flâneur? You don’t see that many flâneurs around these days.

Linda Rui Feng: I can get readers to care about my characters. I’d like to be better at plot—the page-turning, make-you-stay-up-all-night kind—and to be able to deploy the omniscient narrator.

Tsitsi Dangarembga: Depicting relationships, character building and mapping inner psychology, painting lifelike pictures and describing settings in a way that makes them part of the story to impart a strong sense of place, are my strong suits. I wish I were better at more technical elements such as scene-building and plotting. I also wish that writing came more easily. I write in blood.

Julian Sancton: Having worked as a magazine editor for most of my professional life, I think I’ve gotten reasonably good at cutting out the boring parts. I understand the importance of a grabby lede. And I’ve developed a knack for punny headlines, which is an increasingly useless skill in the age of SEO and helps me not at all as an author of narrative nonfiction. As for what I want to work on, it’s mostly pacing, which is to say patience: how to withhold a key detail until it has the maximum impact. Thankfully, my editor at Crown, Kevin Doughten, is a master conductor who knows how to build a crescendo over hundreds of pages.

Monica West: I think my strong suits are description, imagery, and scene. I would love to be better at dialogue, summary, and conflict/tension.

Brian Broome: Prolixity and the run on sentence for instance when, if at all, will this sentence I’m currently writing end; it could go on forever and I find that to be the case with a lot of the sentences I write maybe it’s not a “strong suit”, but it’s definitely a talent to have sentences that just go on and on and on and I’m sorry what was the question again? I’d like to be better at research. But that requires the kind of attention span that I am sorely lacking.

Monica West: I have found so much meaning from reading other writers’ novels. If they let hubris stop them, I would have never connected to their characters, settings, or plots. So the way I deal with that hubris is to think that someone somewhere will see the world in a different way from reading my novel. The benefits of connecting to someone I’ve never met and speaking to them outweigh the potential feelings of hubris from putting something out into the world.

Linda Rui Feng: I don’t contend with it, because I don’t think that, and if others did, it would not be hubris either. Writing for me is an attempt at a kind of telepathy; for it to bear fruit seems a long shot, and yet, it is still worth every effort.

Brian Broome: I focus my attention on the literally billions of people in the world who really couldn’t give a damn who I am, what I’m thinking, or what I have to say about anything. They’re everywhere. They ignore me in their droves. That fact cancels out any hubris I might develop. Look out a bus window right now and you’ll see them going by. All the people who really couldn’t be bothered to give a shit what I’m writing about. You can’t throw a rock without hitting one. I’ve tried.

Tsitsi Dangarembga: I actually don’t think anyone should have any interest I what I have to say. I like collaborative projects where many input into an agreed upon topic that we’ve agreed is significant. I like interviews where I am asked questions that are obviously of interest to the interviewer and presumably the interviewers’ audience. When I work individually and the work goes well, I don’t have the sense of actually writing my books myself. I have the sense of the books coming to me to be written. Sometimes I have to call for a long time by sitting quietly and waiting. I’m grateful when people do show interest in what ends up as the story.

Julian Sancton: I try to tune it out. This question isn’t helping 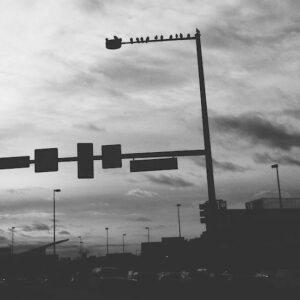 It would be hard to imagine a better vantage point from which to witness life in Northeast Park Hill than the picture window...
© LitHub
Back to top