The Lit Hub Author Questionnaire is a monthly interview featuring seven questions for five authors. This month we talk to one author with a new book and four we missed the first time around in 2020:

Adrian Tomine (The Loneliness of the Long-Distance Cartoonist)

Emily Gould: Vomit and other uncontrollable bodily responses. As all my books are, to some extent.

Adrian Tomine: The seemingly endless string of embarrassments, gaffes, and humiliations I’ve experienced in relation to my chosen career, and the resulting mixed feelings about said career.

Andrew Reiner: It’s about some of the things we already know about contemporary masculinity (think: the unhealthy ways of being a man) that fuel their public health epidemics. But it’s also about the things we don’t talk about: why boys and men are this way, how it devastates them, too, and what boys and men need to do if they’re going to craft a new identity that is healthier for them and the rest of us. Context and compassion accompany critique.

An Yu: How we connect with those closest to us; with strangers; with ourselves. How we mourn. Loneliness. The world of water, sort of. Searching for home, physically and psychologically. How the past keeps up with us and how, sometimes, it overtakes us in our path and pulls us all the way back.

Andrew Reiner: Man, my own life as a boy—then man—who started bucking traditional masculine norms at age 7 (long story—it’s in the book). My life has been an endless lover’s quarrel—better yet, barroom brawl—with these confining expectations. The birth of my son, now nine, was an unexpected reckoning with my own past and present as a new father—and with this gender identity that just isn’t serving any of us anymore.

Andrew DuBois: Pentecostal preachers from the deep South with a pathological spiritual concern for prepositions in the King James Bible, hungry teenagers from backwaters who dig for dope music, poets who believe in poetry rather than the poetry scene and who don’t use their talent as an excuse to behave badly to other people, feminist literary critics with a commitment to form, and the smart guy at the pub who isn’t drunk enough yet to be stupid.

Adrian Tomine: Autobiographical/personal art in various forms: comics, books, film, music, comedy. The self-imposed pressure to create a book that was at least a little bit different from the previous one. My youngest daughter’s demand that I dedicate a book to her. My pathological need to make my wife laugh.

Emily Gould: Everything I ever create is probably the result of having seen Walking and Talking at an impressionable age.

An Yu: Strange dreams. Soft and hollow sounds. Black. Some deep blue. Thinking about the past. Buddhism. The limitations of the body.

Adrian Tomine: Spending a lot of time with two kids. Trying and failing to create a TV show. Learning to make bread. Trying to decide if I even want to be a cartoonist anymore.

Andrew DuBois: Luckily, I’ve mostly been spared this indignity, having been infrequently reviewed, but I hope I’m never called “award-winning,” especially if I were ever to win an award. It would be painful if my prose was called cloying, overdetermined, purple, or racist. (Even though it is sometimes purple, but sentences are so fun.)

Andrew Reiner: I truly don’t mean this as a cop-out to this question, but I try hard not to read or spend too much time on comments or reviews. They’re a set-up for mercurial misery on both poles.

An Yu: A shoemaker. Or a machine learning engineer.

Andrew Reiner: Archaeologist for 17th- and 18th-century history. Curator of early American letters and documents (I’d settle for objects) at the Massachusetts or Virginia Historical Society. Third- or fourth-grade teacher.

Adrian Tomine: I’ve always had an amazing gift for emulating superficial qualities of other artists’ work. I’d like to be better at every craft element except that one.

Andrew Reiner: Strengths: Good: feel for the telling detail and interiority of a sentence, ear for dialogue, feel for synthesizing research into narrative pretty seamlessly. Clear yet smart syntax.

Weaknesses: Need broader palette for rhetorical framing. Develop better feel for subtlety, nuance in disclosure; I’m a big fan of clarity and transparency, so that can sometimes undermine tension and art.

An Yu: For the most part, I think I’m quite good at using images and moods to capture the things that might be difficult to grasp with everyday language. I really do need to work on plot.

Emily Gould: I’m good at description, inventing the specific details that get a reader inside a character’s mind and circumstances. I don’t think I have a natural flair for seamlessly interweaving that kind of thing with narrative, the way Henry James or somebody like that does, where the characters and the scene and the furniture are just all part of the same seamless monolithic edifice.

Andrew DuBois: I’m fair and have tact, not bad at clarifying abstruse points with common-sensical metaphors, decent at non-he-he humor, make good connections between disparate artifacts, and write well for someone who was overeducated in the finer places. I would like to bring more immediate narrative interest to bear on my work, which I could probably start by saying, “I want to tell better stories.” As a reviewer, I likely ought to be “meaner” on occasion, but it’s not in my nature, although I suppose if anyone has a problem with that, I have a good candidate to start with.

Emily Gould:  Idk, I find myself interesting, although frustatingly unreliable and self-contradictory. I’m like, what will me say next?

An Yu: I’m still figuring that one out. I don’t think it’s about whether anyone should have interest in what I have to say. I write because spoken language often fails me. When feelings are said out loud they become less accurate, somehow. I can only hope that some readers feel the same way too.

Andrew DuBois: I do believe from life that pride cometh before the fall and that they whom the Gods would destroy they first make mad. Anyone who is interested in the art that I discuss and who likes good writing by a thoughtful person who knows what they’re talking about ought necessarily to have an interest in my work, but people are complicated and busy and I’m not too hungry for attention, so hopefully am not too hubristic when I get it, should you be kind enough to give it to me.

Andrew Reiner: There’s hubris in going onto Twitter-verse and spewing one’s opinions across cyberspace with little research or considerable introspection to back up those knee-jerk opinions. But I have a hard time seeing hubris in any author who has spent a lifetime living, wrestling with (literally and figuratively), kicking around, deeply researching and writing about a topic in highly selective, reputable news outlets and a publishing house. No one has to read my book. But if anyone is curious at all about this topic and wants to dip into a book that covers it with considerable depth, breadth and a context and empathy too often missing from the conversation, then I hope that person will give my book a chance. 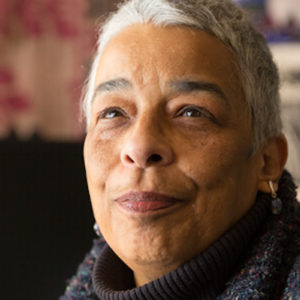 Thulani Davis has been my poet sister artist comrade for nearly 50 years. We met in San Francisco one night in either 1971...
© LitHub
Back to top