Listen to the Marriage 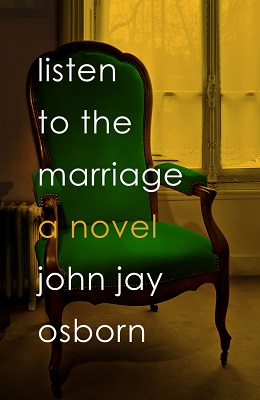 The following is from John Jay Osborn's novel, Listen to the Marriage. Set entirely in a marriage counselor's office, the novel traces the relationship of a recently separated couple and the person who tries to bring them back together. John Jay Osborn is a graduate of Harvard Law School. He has practiced and taught law, written several novels, and written for a number of TV shows. Since 1991, he has been a professor of law at the law school of the University of San Francisco.

“You guys got together in college, right?” Sandy said.

“Yes,” Gretchen said. “I was a freshman, but I had sophomore standing, so I could take pretty much any course I wanted. Steve was a junior. We met in class.”

“A seminar,” Gretchen said. “I’m not sure, but I think there were perhaps twelve students in the class.”

“And somehow Steve came to your attention,” Sandy said. “Why?”

Gretchen looked at the ceiling for a moment, and then back at Sandy.

“There were only twelve students in the class, you pretty much notice everyone,” she said evenly.

“Maybe I phrased it wrong,” Sandy said. “You first met Steve in an Elizabethan poetry seminar. From there it led to a love affair. Why?”

“Do we need to talk about this?” Gretchen said.

“You want to explain it?” Gretchen said to Steve. He shook his head.

“So the professor was trying to make some broad points about how Elizabethan poetry was different from, say, modern poetry. Anyway, there were some pretty affected guys in the class, sort of mega-intellectual guys. With scarves. You know. And then there was Steve, who looked like he’d just blown in from L.A. or something.”

A little change took place. Sandy saw not a smile, not anything you could define precisely, but Gretchen was looking sort of into the middle distance. She was going back to that moment.

“Anyway, there was a huge amount of stupid convoluted stuff being bantered around. You know, whenever someone talks about semantics I get nervous. And that was the general direction we were going in. Semiotics and hermeneutics.

“But we all had the book right in front of us, and on the cover was a picture of Queen Elizabeth. All dressed up with this incredible ruff thing around her neck, this dress with billowing sleeves that was covered with tiny pearls in intricate designs. And Steve said that if we wanted to understand the difference between Elizabethan poetry and modern poetry, maybe we ought to think about the difference between Elizabethan dress and modern dress. And he held up the book. I noticed him when he suggested that. The professor noticed too.”

Gretchen crossed her arms and sat back.

“And somehow Steve came to your attention,” Sandy said. “Why?” Gretchen looked at the ceiling for a moment, and then back at Sandy. “There were only twelve students in the class, you pretty much notice everyone,” she said evenly.

“That’s a nice story,” Sandy said. “I want to try something. Gretchen, I want you to look at Steve and tell me what you see now.”

But Gretchen didn’t look at Steve. She said: “I’m so fed up with Steve, I’m not sure I can see him objectively.”

“So don’t be objective. Just look at Steve,” Sandy said. “Describe him the way you would any object. What do
you see?”

Gretchen looked at Steve, in a cursory way, as if he weren’t of much interest. She said nothing.

She’s beginning to tick me off, Sandy realized. She stared at Gretchen and said nothing.

“You want me to just describe him?” Gretchen asked after a few more seconds.

“Yes,” Sandy said flatly, thinking, Isn’t that what I asked?

“Okay,” Gretchen said. She perked up. “I see a guy in his mid-thirties, he’s got brown hair, brown eyes. He wears yellow glasses. He has on a blue button-down shirt, cords, driving shoes. How’s that?”

That was pretty good, Sandy thought, these two are good little wonks, you give them an assignment, they can’t help themselves, they want to do a good job.

“I think you could go a little further,” Sandy pushed.

“You’re pushing me, but that’s okay,” Gretchen said, Sandy noticing their minds were now in sync.

“Everything about him is kind of perfect,” Gretchen said. “He has a silver belt buckle, and it’s polished. His shirt is ironed nicely. He has a great haircut and it’s pretty recent. Those yellow glasses? I happen to know they’re Italian. Very stylish. So I guess I think he’s looking casual, but he’s put in a lot of effort to do it.”

“You’re not making this easy,” Gretchen said. Gretchen looked hard at Steve, taking him in for a good minute. Sandy noticed that Steve reacted to Gretchen’s stare, looking away toward the window.

Gretchen said, “I think Steve has a sort of boyish look.”

“How do you mean boyish?” Sandy asked.

“I may be reading too much into this,” Gretchen said. “It’s like he’s really trying hard. He wants to look all grownup, and he’s trying so hard. You feel as if you don’t want to pop his balloon. You want to tell him, Nice job, you look good.”

“That was a good effort,” Sandy said, and then looked at Steve.

“Steve, are you trying hard to look good?” Sandy said.

Steve threw his arms out, an expression that said something like What do you expect?

“What are you nervous about?” Sandy asked.

“For one thing, my marriage is on the line,” Steve said. “That’s a pretty big thing. I guess I want to do all I can to try to get my marriage back on track.”

He sighed. He looked uncomfortable.

“When we first separated, I felt as if I was in a dense fog. I was disoriented. It was hard to make even small decisions. I remember I went to a cash machine. I put in my card. And then I couldn’t remember my PIN. I couldn’t remember four numbers that I had been using it seemed like all my life. After a while, I canceled the transaction, took my card, and went and sat in my car.

“I sat there for like half an hour and then, by some miracle, my PIN floated up to me as if it were coming to the surface of a lake. And I went and got two hundred dollars out.

Sandy saw that Gretchen was staring at Steve, giving him her complete attention.

“So, anyway, it was like I needed to teach myself how to do things. The first thing I did was I gave my car an inspection. I checked the oil, I checked the tires, the water, everything. I wanted to make sure that I had the basics covered. Then I sat down at my desk and checked all my accounts and all the bills. I hadn’t paid any attention to that stuff for weeks.

“It was like I was creating myself from the ground up. So, that’s why my shirt is pressed, and my hair is cut. I feel as if I need to make sure I tackle the little things. All the things that most people take for granted, I have to make sure I’m doing them. I’m still having trouble.”

“Gretchen, what Steve said, does it make you see him any differently?” Sandy asked.

“I never thought I could knock Steve back on his heels,” Gretchen said. “I’m still surprised. I didn’t realize he was so vulnerable. So, I want to make a connection. I said he seemed boyish, young. What I was seeing was that he was vulnerable. I used to be scared of Steve.”

“I’m sorry I made you scared,” Steve said.

“One thing first,” Steve said. “Right after we first split up, I said it was like I was in a deep fog? The one thing I could see clearly was Gretchen. It was as if I hadn’t been looking, but now I saw her really clearly.”

“So I see a really beautiful woman. I see blond hair, blue eyes, I see that she’s not wearing a wedding ring. I see that she has little gold circle earrings, a gold watch. No other jewelry. She’s wearing stretchy jeans, a white shirt, black shoes. Flats, no heels. I see the brown leather purse on the floor, which I know comes from Bottega Veneta because I bought it for her.”

He looked away from Gretchen.

“Can you see more?” Sandy said.

“This is making me feel sad,” Steve said. “I can’t believe I ever hurt you.”

“Well, you did,” Gretchen said. “But it’s not going to happen again.”

“What do you see?” Sandy said.

“Gretchen, you look as if you’re only partly here,” Steve said slowly. “I don’t think you’re engaged with me. A part of you is far away.”

“You’re right,” Gretchen said. “I can’t help it. I’m trying to be engaged with you. I’m coming to these sessions. But it’s hard to be with you, Steve.”

“When I was describing Steve, I felt detached, almost clinical,” Gretchen said.

“I’m holding him at a distance,” Gretchen said.

“If I can’t empathize with Steve, then this isn’t ever going to work, is it?” Gretchen said. She pushed back in her chair. She seemed fragile to Sandy. Now she looked at Steve again.

“I just can’t believe you put everything we had at risk. I mean, how could you be such an idiot?” Gretchen said to him.

“I can explain how I could be such a complete idiot,” Steve said.

“I already know,” Gretchen said. “You were miserable. Our life made you miserable.”

“I had made myself miserable,” Steve said.

“So you made us both miserable,” Gretchen said. “That was smart.”

That was smart. She hit the word hard.

Steve was reaching out to Gretchen, and she beat him back with sarcasm and contempt. Steve kept coming. He dusted himself off, and made sure his shirt was pressed and his buckle was polished, and he went at it again.

Look at him, Gretchen, Sandy thought. Really look at him. Look how he comes back again and again to you.

From Listen to the Marriage. Used with permission of Farrar, Straus and Giroux. Copyright © 2018 by John Jay Osborn.

Anthea Bell, Translator of Sebald, Kafka, and Asterix, Has Died at 82 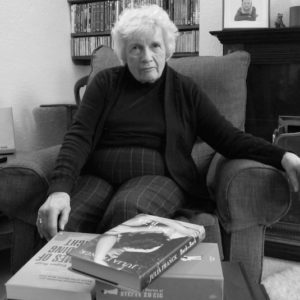