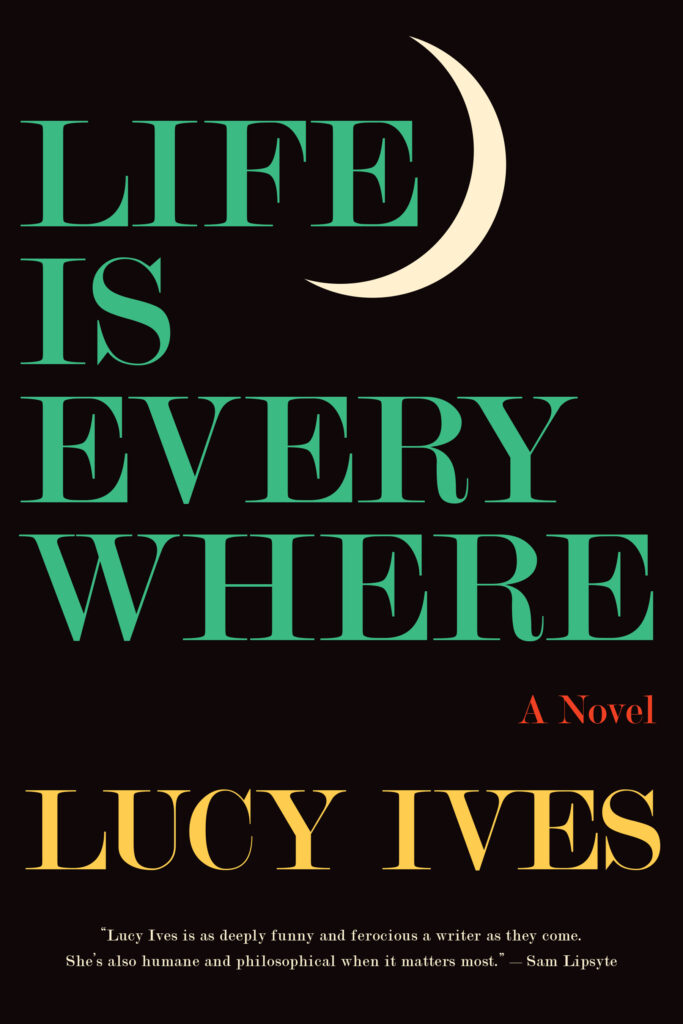 The following is from Lucy Ives's Life Is Everywhere. Ives is the author of the novels Impossible Views of the World and Loudermilk: Or, The Real Poet; Or, The Origin of the World and the story collection Cosmogony. Her writing has appeared in Aperture, Artforum, frieze, Granta, n+1, and Vogue.

Here is how Hamlet appeared: This much is traditional, Hamlet was a blond. Hamlet was a beauty as a child, but this beauty would not see her through to adulthood. Somehow I think, recalling her face now, that she will be a beautiful old woman, if she is still living when she is old. But when she was little, this Hamlet was a walking flower. Her pointed face held yellow eyes; her hair was gold. A barrette secured it. She laughed, receiving a compliment or food.

Hamlet had chosen me. We were in school together. We were six years old.

There was a game with Hamlet, who was never taunted for her name, somehow, even if the literary reference meant nothing to the other children and rhymed with omelet. In Hamlet’s young world, everything was already known and had simply been forgotten through disuse. And by disuse I mean: Hamlet’s inexperience.

Although there were many, many things that Hamlet had not lived and did not know, for the girl Hamlet these new things were all ancient acquaintances, objects relegated to a closet or the bottom

of a box, their faces turned away by collective neglect. Hamlet rescued these items by means of her attention. She restored the world, merely by passing through it, by speaking and naming, by smelling, seeing, indicating. So Hamlet, a girl, restored me. She was the one who gave me something like a memory. Thank you, Hamlet. With you, my history begins.

There are three famous dreams from the time I first met Hamlet. I tried to tell Hamlet, too, but I think I repeated myself too often, and Hamlet hated repetition.

The first dream was a dream about escaping crucifixion, although I do not fully understand what sense I could have had at the time regarding the reality of crucifixion, a premodern capital punishment. I was a child living in the West and dead Jesuses were everywhere. I believed that these Jesuses were only shriveled men, disappointed, ancient, and unwell. I did not understand that they had been executed, as I probably would have known had I received any education in religion. I think I thought they were sick. God had made them sick. They were what sick people looked like to God. My dream was distinguished by its interest in crucifixes—nor were these merely decorative. They were arranged along the crest of a hill that formed the backdrop to what I can think of as a town, though maybe it was just (or, merely) a crossing of roads, a reviled place that desperate consensus caused to appear as a corner of civilization.

Everything was lumps. The sky was a gray dish. Nothing worked. We were in a broken taxi; it vibrated and you smelled gasoline. We had to get away, my parents and I. Something was drifting into the landscape, nonchalantly consuming human lives. It was very swift, this thing. Maybe this thing was other people. I’ve never known what it was. This was just a dream full of slippery mud. My heart was racing. I wanted to run when I woke but instead I stayed in bed. This is the first of the dreams I have never forgotten. The bodies droop from the wood. They have been pinned there, peelings.

The second dream I have never forgotten is set in what I take to be a European forest. Maybe a black light is being used to give special illumination to this place. Many things are black, shining, as if patent leather, black glass. There is a febrile green here, too, a chemical lawn, wild strawberries. White, like lace, edges things. Bright white is used for the seeds of strawberries; also for glints on things. I walk through the European forest. I have just escaped from a building I take to be a hotel. There they warned me that I would not be able to see at night. There in the hotel blinding lights shone. Tables were always being moved—round tables, rolled on their sides. I ran away to the forest where for a short period I was indeed blind. Now I have begun to see. I walk and gaze at the alarming strawberries. They are like thoughts. Maybe there are violet pansies, too. This is when I find a thing. The thing has long, black hair. It rests on the forest floor. I approach. I am looking over it and looking at it from the side, and I can see what it is, although I do not want to know what it is. I know what it is, but I do not want to know. The thing is a severed head, very white and very silver, with long black hair. The hair is like grasses and gets everywhere. The hair is sticky. The head knows that I have seen it. It is dead and also alive. Its mouth is open, its painted gray mouth, and

I think that the head is moaning. It makes a continuous moan. A film covers all things and I cannot speak. I can’t move. I am lost in the scream of the head.

I dream: that I am lying in my bed unable to sleep. I dream this all night long: lying in my bed, unable to sleep, under a comforter with a pattern of blooming roses. I am thinking, in the dream in which I lie in a bed identical to my own, of a red-haired chef. The red-haired chef wears a white, buttoned uniform, carries a spoon. The red-haired chef is substantial. What is it, I think, during the dreamed period of sleeplessness, during which I am in fact sleeping, to be a chef? What is it to stand behind a wall and create in order to serve? I don’t know why I think this, in my dream. I don’t know why I contemplate the dark-gold skin of the red-haired chef, what seems to be his rage and also his genius. I want to know what a chef is. I am dreaming, but I am awake. The chef stands in my mind, bearing his spoon. He stands in a mind that is part of my dream. It is not my mind. It is a mind that I dream I have, while I am dreaming that I am not asleep.

I try to tell Hamlet about the dreams. I feel that she will appreciate them. They are so vivid and pointless and strange, and I think she will admire my style, although we are only eight years old. Hamlet knows a lot about style. She understands fine things and will comprehend the rarefied nature of what I see when I’m unconscious.

But Hamlet does not want to know about my dreams. She tells me not to talk about them. Her little face seems to get littler for a moment. She appears to be washing something away.

Hamlet says that she has a story to tell me and this story will amaze me. “OK,” I say. I don’t want to show how eager I am to hear Hamlet’s story, but, yes, it is true: I am eager.

Hamlet raises her hands and makes the world disappear. I’ll never know how she did it. At this time, Hamlet had powers that, as far as I can tell, were never hers again and that no one else in the world had ever had or would possess. I sometimes have to ask myself, How was it, really, that I came to know her? How did I stumble upon her: she who was the temporary greatest prodigy of all of human history? I was the sole witness to this. I knew and was alone.

But Hamlet, as I was saying, raises her hands. She raises her hands and she proclaims, “This is a story about what would happen if both of my parents died and we are orphans.”

Neither of Hamlet’s parents are home at the moment, and I don’t know where her siblings are.

I try to imagine. There’s a way, anyhow, that Hamlet’s house looks—as if it has just been robbed. Each room has only one or two items of furniture in it, and these items of furniture, although usually upright, are always in a different place, from day to day if not hour to hour. They seem tossed aside, as if they at one time stood in the path of someone who was looking for something. I can see how I might be called upon to be responsible for this home—this home that daily, nightly, some invisible force ravages. It’s like a ship, I think, attempting to dwell more warmly in Hamlet’s words.

“Your parents?” I ask. I mean about the counterfeiting of them still being living. “Don’t they already know they’re dead?”

Hamlet does not like it when I interrupt her stories. I should not have asked these questions.

“No!” Hamlet exclaims. Her face goes crooked for a minute and I think that she may cry. “You need to have someone living with you who is over eighteen and who is your guardian and that is what we are going to do. Because we have to because they want to separate us.” Having said this, Hamlet seems relieved. She was right all along, she understood which story she was trying to tell, while I, stupidly, doubted. I’m very lucky that she is still willing to talk to me.

But Hamlet doesn’t really care about justice, and this is why she cannot stay mad at me for long. She knows that she has made it past my misgivings and that we are already in the story. I am captive. Hamlet is free.

From Life Is Everywhere by Lucy Ives. Used with permission of the publisher, Graywolf Press. Copyright 2022 by Lucy Ives. 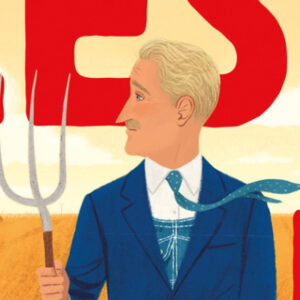 Less is Lost by Andrew Sean Greer, Read by Robert Petkoff Every Monday through Friday, AudioFile’s editors recommend the best in audiobook listening. We keep our daily episodes...
© LitHub
Back to top