Life As It Really Is: Translator Richard Pevear on the Stories of Chekhov

"In art, as in life, there is nothing accidental.”

Our intention in making this collection has been to represent the extraordinary variety of Anton Chekhov’s stories, from earliest to latest, in terms of characters, events, social classes, settings, voicing, and formal inventiveness. By chance the selection came to 52 stories—a full deck! But, as Chekhov once wrote, “in art, as in life, there is nothing accidental.”

When Chekhov began to write humorous stories and sketches, he thought he was doing it simply for money. And so he was. His father’s grocery business, in their native Taganrog, on the Sea of Azov, had gone bankrupt in 1876, and to avoid debtor’s prison the family had fled to Moscow, where Chekhov’s two older brothers were already studying at the university. Chekhov, who was sixteen at the time, stayed behind to finish high school, supporting himself in various ways, one of them being the publication of humorous sketches in local papers, signed with various pseudonyms. In 1879 he graduated and moved to Moscow himself, where he entered medical school, and where his writing, still pseudonymous, became virtually the sole support of the family—mother, father, four brothers, and a sister.

Chekhov paid no attention to the artistic quality of his sketches; he simply tossed them off, sometimes several a day, and sent them to various daily or weekly humor sheets, whose editors gladly printed them. But his true artistic gift—innate, intuitive—showed itself even in the most exaggerated, absurd, and playful of these early jottings. They were mainly jokes, often satirical, but he also played with words in them, for instance in naming his characters.

In “At the Post Office” (1883), the postmaster’s name is Sweetpepper and the police chief’s name is Swashbuckle. The French tutor in “In a Foreign Land” is Monsieur Shampooing, the French word for shampoo. Corporal Whompov is the heavy-handed officer in the story named for him. In “An Educated Blockhead” (1885), the name of the accused is Slopsov and the justice of the peace is Sixwingsky, suggestive of a seraph. In “Romance with a Double Bass” (1886), the main character, owner of the double bass, is named Bowsky, after the instrument’s articulator; we also run into such men as Buzzkin, Flunkeyich, and Flaskov. And there are others. These names have almost always been simply transliterated in English, giving no hint of their literal meaning in Russian.

“What makes literature art is precisely its depiction of life as it really is. Its charge is the unconditional and honest truth.”

After 1886, Chekhov stopped using such overtly comical names, but in later stories we still find characters like Zhmukhin in “The Pecheneg” (1897), whose name, while credible enough, also suggests pushing, squeezing, oppression. Chekhov also persisted in his transcribing of noises. The dog in “The Teacher of Literature” (1894) does not simply bark; his “grrr . . . nya-nya-nya-nya” pervades the story. The night owl in “The Pecheneg” keeps calling “Sleep! Sleep!” The wind howls “Hoo! Hoo!” And in his descriptions of nature there is a pervasive anthropomorphism—trees that swoon, rivers that speak, the “malicious, but deeply unhappy” storm in “On the Road” (1886), the previous day’s mist in “Fear” (1892), which “timidly pressed itself to the bushes and hummocks.” In a letter of May 10, 1886, to his older brother Alexander, who was also trying to be a writer, he offers some advice:

For instance, you will succeed in depicting a moonlit night if you write that on the mill dam a piece of glass from a broken bottle flashed like a bright star and the black shadow of a dog or wolf rolled along like a ball and so forth. Nature comes alive if you’re not squeamish about comparing natural phenomena to human actions . . .

Yet in a letter dated January 14, 1887, to an acquaintance, Maria Kiselyova, who complained to him that he kept digging in the “dung heap” of immorality, Chekhov asserts: “What makes literature art is precisely its depiction of life as it really is. Its charge is the unconditional and honest truth.” And further on he says of the writer: “He’s no different from the run-of-the-mill reporter.” It is true that Chekhov’s stories are filled with details of everyday existence, often very dark and always very keenly observed. He had an unusually wide personal experience of Russian life on all levels, and portrays a great variety of people: landowners, peasants, the military, bureaucrats, farmers, townspeople, clergy high and low, provincial school teachers, intellectuals, university students, boys, mistresses, wives, hunters, shepherds. In one story the central character is a boy two years and eight months old; in another the central character is a dog. But the stories he tells about them are hardly run-of-the-mill reporting.

The formal variety of Chekhov’s stories is also far from “slice-of-life” realism. Sometimes he chooses suspended moments—on a train, on the road, in a cart—that allow for unexpected revelations, or pseudo-revelations. Many are essentially monologues, which occasionally lead to surprise reversals. In “The Siren” (1887), after a court session, the court secretary entices his superiors, even the stern philosopher, with an inspired and minutely detailed five-page discourse on Russian eating and drinking, ending with honey-spice vodka, of which he says: “After the first glass, your whole soul is engulfed in a sort of fragrant mirage, and it seems that you are not at home in your armchair, but somewhere in Australia, on some sort of ultrasoft ostrich . . .” There are doublings, as in the early “Fat and Skinny” or the late “Big Volodya and Little Volodya.” In his notes for the rather grim story “The Bet” (1889), he first refers to it as “a fairy tale.” The formal qualities of storytelling, of parables, anecdotes, and morality tales, are present throughout his work. It is nurtured by tradition, though he puts that tradition to his own use.

Chekhov was well aware of the political movements of his time and their main spokesmen. His characters refer at various moments to Sergei Aksakov and the Slavophiles, to the Nihilists, to the utilitarian Dmitri Pisarev, to the populist Nikolai Mikhailovsky, as well as to the French anarchist Pierre-Joseph Proudhon and the German philosopher Schopenhauer. He was friends with the conservative writer, journalist, and editor Alexei Suvorin, who published many of his stories in his journal Novoye Vremya (“New Times”), but he did not share the editor’s increasingly reactionary views, and broke with him over the controversy of the Dreyfus affair. Chekhov never espoused any ideas as a writer; he had no program, no ideology; the critics of his time wondered what his work was “about.”

Tolstoy wrote of him in a letter to his son dated September 4, 1895: “he has not yet revealed a definite point of view.” Chekhov revealed his attitude to the peasantry by offering a large number of them free medical treatment while living on his small country estate in Melikhovo. He showed his concern for the environment, not like the old man in “The Shepherd’s Pipe,” who bemoans at great length the dying out of nature, but by planting trees, like Doctor Astrov in the play Uncle Vanya.

In his stories, Chekhov does what storytellers have always done: he satirizes human pretensions and absurdities, he plays out the comedy of human contradictions, and ultimately, even in the darkest of them, he celebrates natural and human existence in all its conditional variety.

Read a story from the collection here. 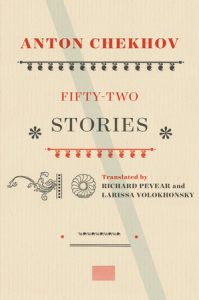 From the preface, Fifty-Two Stories by Anton Chekhov. Translated by Richard Pevear and Larissa Volokhonsky. Copyright © 2020 by Richard Pevear and Larissa Volokhonsky. Excerpted by permission of Alfred A. Knopf, a division of Penguin Random House LLC. All rights reserved. No part of this excerpt may be reproduced or reprinted without permission in writing from the publisher.

Together, Richard Pevear and Larissa Volokhonsky have translated works by Chekhov, Dostoevsky, Tolstoy, Gogol, Bulgakov, Leskov, and Pasternak. They were twice awarded the PEN/Book-of-the-Month Club Translation Prize (for Dostoevsky’s The Brothers Karamazov and Tolstoy’s Anna Karenina). They are married and live in France.

The Best Rain in Literature 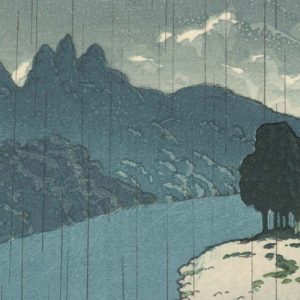 The Best Rain in Literature

This morning, it is raining, and I am drinking tea. Whenever these two elements coincide, I always think of a poem I discovered...
© LitHub
Back to top
Loading Comments...