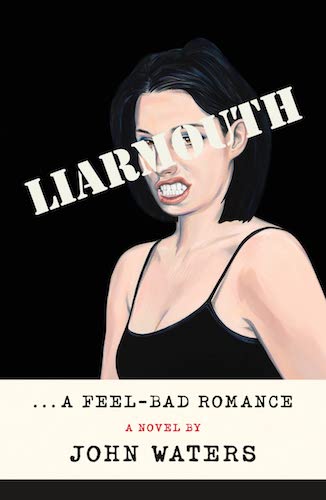 The following is excerpted from John Waters' new novel, Liarmouth: A Feel-Bad Romance. Waters is a writer, a film director, an actor, and a visual artist best known for his films, including Hairspray, Pink Flamingos, and Serial Mom. He is the author of the national bestsellers Role Models, Carsick and Mr. Know-It-All. His spoken-word shows This Filthy World and A John Waters Christmas continue to be performed around the world. He lives in Baltimore, Maryland.

Poppy Samuels is bouncing on one of the two mini trampolines that make up much of her office at the Bouncy-Bouncy Trampoline Fun Park. She’s dressed as always in a one-piece tracksuit, this time floral, and her brunette hair is kept short and simple for minimum jumping upkeep. She always feels the most relaxed, healthiest, and, yes, happiest when she’s midair and free from the financial troubles of running her privately owned business that used to be quite lucrative until those idiot International Association of Trampoline Park officials shut her down. Was that unfortunate children’s birthday party that ended with three injuries, two of them serious, really her fault? Hadn’t those young folks refused to follow the posted rules anyone could see? And what good’s a parent-signed liability waiver if the court ignores this valid contract? Why was Poppy responsible for some oaf of a child jumping on top of another one, fracturing his leg? Shouldn’t her errant parents have been keeping an eye on this delinquent who was wearing shoes while trampolining, despite warnings? Why is the other kid’s bruised pelvis Poppy’s fault? And don’t even start on the birthday boy, the one who supposedly broke both arms after tearing through one of the older, worn trampoline nets and landing on the concrete floor below. How was Poppy negligent just because she had innocently forgotten to put the out of order sign back on that over-priced piece of equipment after cleaning up from the very busy Saturday night before? Poppy ran Bouncy-Bouncy all by her twenty-two-year-old self. She can’t do everything.

Despite the largest single-jury verdict against a commercial trampoline park in the United States (and Poppy plans to get back not only her gigantic fine but her attorney’s fees, too, once this injustice is finally overturned), her most loyal customers refused to jump ship. Like a defiant speakeasy in Prohibition, Bouncy is up and running, illegally. Luckily her landlady, Miss Betty, also known as Leepa, the two-hundred-plus-pound gymnast whose idea of “All You Can Eat and Bounce” night really took off, has been a loyal customer from the beginning. Leepa immediately embraced Poppy’s idea of disguising the place with a fake storefront to fool the authorities and keep it open. When the chips are down, extreme jumpers stick together, and today is their first fundraiser.

“This Volvo drives pretty well,” thinks Marsha as she cruises out of the city in the car seized from her potential molester. She should have been on the show To Catch a Predator, the women’s version. Yes, where she’s headed is kind of near the dreaded Dutch Village, but she can go another route to avoid even a glimpse of her past. She’s exhausted but not defeated. Her plans may have been interrupted but she’s back on track and Operation Ditch Daryl has already been a success. Now for the next step.

As she stops for a red light, she’s relieved. Almost nothing can happen except getting carjacked, and what are the odds of that considering what she’s been through today? But then, out of the corner of her eye, she sees some man, another goddamn man, frantically gesturing to her from his vehicle. With a certain amount of irritation, she rolls down her window a little, but not far enough for any wildlife to fly in and invade her mouth. “Excuse me,” he whines, “I’m kind of lost. Can you tell me how to get to the Owings Mills mall?” Well, that’s a first. A male without a GPS asking for directions. Usually, they’d rather die than admit they don’t know where they’re going. Of course, Marsha does know where this now-demolished mall once was. She has fond memories of the Saks Fifth Avenue that used to be there—especially its rather naive Returns Department she scammed several times. Even if the mall was rebuilt and reopened under a different name fairly recently, why should she tell him how to get anywhere? Had they had the pleasure of an introduction? Is he offering any kind of fee for this information? “Sure,” she answers sweetly, “turn right up here on Joppa Road and go about three miles until you hit York Road and make a right and just follow that and you’ll see it right on the left.” “Thank you so much,” he shouts cheerily as she even waves him to cut in front of her to make the turn. Of course, these are the exact wrong directions and just that fact alone makes her feel better, more intellectually advanced yet practical and, yes, prettier.

Poppy’s rigged the place so she never really has to stop bouncing. She can fly up and down and then project herself to the far left and land on a larger mat in the main tramp room and then hurl herself to the left wall, ricochet back to the main springboard, and then, with one final burst of adrenaline, jump up to the specially designed ceiling tramp with a super-duper SkyBoard brand of springs where she uses her hands to propel herself back down in a front full somersault, landing on the Bouncy-Bouncy landing pad with grace. It’s quite an entrance.

Her customers are thrilled to be leaders in the radical trampoline movement, and today they’ve put their money where their feet are—right here in the clandestine recreation center. What other tramp park, especially one of this size, has hosted Drag Competition Bouncing Nights? Campolina, as she calls herself proudly, has been fearless about getting the word out in the gay community, and Poppy owes her big-time. Some of these queens really flip their wigs doing back somersaults! It’s a diverse lot here at Bouncy-Bouncy and Campolina’s generous cash donation proves her dedication.

Vaulta, a six-foot-tall Caucasian female bouncer who has been unfairly rejected from Olympic tryouts, can do a mean “full twist” despite having only one arm (it was her business how she lost it; no one has ever asked). She had organized supporters for other legal fundraisers in the past, but now that the chosen few had gone underground, it was her own cold hard cash that was paying the electric bills. And God bless Springboard Sam and Double Back Barbara, that African American couple who had never revealed their real names but were once a yodeling musical duo who performed while trampolining under the name “The Twitching Tonsils.” They stayed even after the “tramp troubles,” as that fateful party night of shame became known in the trade. Despite being labeled “safety scofflaws” and “gravity conspirators” by the authorities, they aren’t afraid of frivolous lawsuits any more than Poppy is. “Having an altitude” is something all tonight’s guests were proud of. They are a movement in the making.

Marsha cruises Belair Road slowly and turns off on a street that looks vaguely familiar. Bouncy-Bouncy used to be somewhere around here. Of course, on their coded Facebook announcement she spied on once, they really don’t give the exact address for their ridiculous fundraiser. She’s been there before, the time she boosted the wallets out of Poppy’s customers’ handbags on “Talent Day.” Talent! Oh yeah! An idiot on a trampoline who juggled! Real talent! And don’t even get her started on those two yodeling air tumblers! I mean really.

Marsha’s not even sure what Poppy’s business looks like on the outside these days. She knows there’s been some legal trouble, so at least that ridiculous sign with the cartoon children springing up in the air like rubber balls must be covered up. She remembers some kind of low-rent convenience store on the corner and this looks like it could be it, but it’s now all fixed up. Maybe you could finally purchase a good box of crackers in the neighborhood! A lawn-mower shop called Mower Mania. Could that be it? Probably. What a cheesy name to hide behind! That daughter of hers will never learn. She must pay. Pay through the teeth for polluting Marsha’s birth canal.

25 new books to pick up this week.

Pride and Prejudice: Chapters 46 and 47 by Jane Austen, Read by Alison Larkin 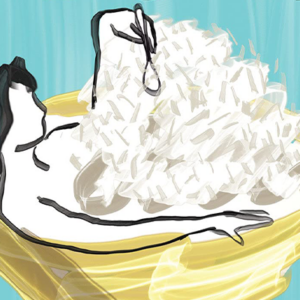 25 new books to pick up this week. A new month means new books! May I recommend some to you today? From celebrity memoirs to reissued classics, from stellar...
© LitHub
Back to top