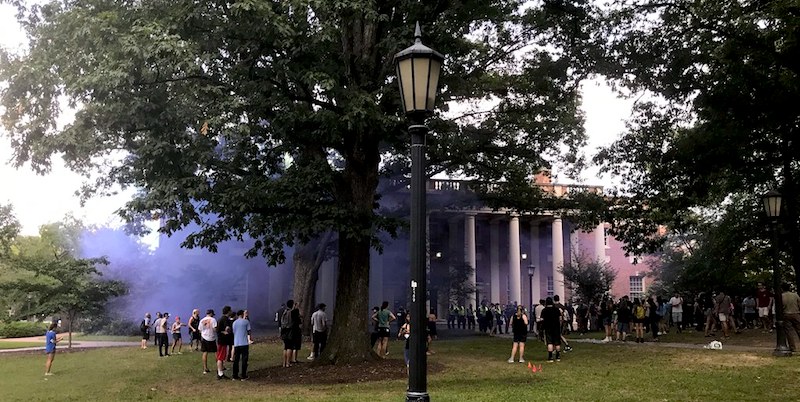 "The war has only just begun."

And this particular location feels as if it were the epicenter, the beginning, when students tore down the “iconic” statue at the front gates of the University of North Carolina on the evening of August 20th, 2018, leading to the confrontation between Klansmen and right wing activists and fresh-faced students, and the firing of our chancellor. Looking at the videos of cops manhandling and clashing with young people—black, white and Asian—feels prescient. But I can’t help thinking of the lithe Bree Newsome who climbed the flag pole in Columbia, South Carolina, in 2015, and ripped down the Confederate flag as a galvanizing and generative moment. Yes, Black Lives Matter was a full-fledged movement by that point, but a certain focus had already begun to take over the young folk, and the memorialization of the Confederacy felt absolutely galling. It was galling before, but the idea that something could be done about the celebration of the “Lost Cause” had become imaginable. But it wasn’t only about the Civil War. It was about Jim Crow. It was about UpSouth Chicago and Detroit. It was about gentrification.

I was an undergraduate here at UNC in the 1980s and walked past Silent Sam every day. It is not that I didn’t see it, or know its history—on the day of its dedication a local millionaire, Julian Carr, who paid for it, bragged about whipping a black “wench” until he shredded her clothes. Every black student I knew knew that story, and it cut us to our core, yet imagining it actually coming down was not considered a possibility, the fact that it would stand so arrogantly, well into the 22nd century, seemed an inevitability. That such righteous destruction would one day happen in Charlotte, Durham, Fayetteville, New Orleans, and ultimately Richmond, the capital of the Confederacy, would have struck me as science fiction in 1984. That the names of racist generals would be stripped from 100 year old buildings the least possible. (Our current chancellor has announced most of these buildings will now be renamed.)

Still, what I most would have struggled to imagine, is that certain people would be up-in arms were it to ever happen. That they would quite literally take over a state capital building, bearing arms, in anger to keep monuments up. That we might have another civil war over the matter.

Can we seize the moment? We all must now readjust our thinking.

For me—a poor black boy from the swamps of Eastern North Carolina—the Civil War was far from a lost cause, let alone a done war. I had underestimated how unfinished. Most Southern states are host to many Civil War Re-Enactors, many of them quite literate, supposedly sticklers for historical accuracy who can argue about geography all night but the fantasies these monuments and symbols represent don’t embarrass them. I find this mystifying. They still defend these murderous, enslaving individuals, these traitors. Even though—being such students of “the War of Northern Aggression”—they know full well these monuments were erected decades after the War had been won—not a lost cause at all—to bolster the Big Brother eyes of Jim Crow, to reinforce the notion of racial superiority. These statues are monuments to that war, not the war of Lee and Sherman and Grant.

The coming war will not be about the monuments, but the mentalities. Let’s be clear on what that future war will be about: Why hold on to these antiquated notions of skin-color signifying some type of superiority? Why cling to a past of loss and degradation? (Those who fought for the Confederacy were clearly back-broken in the end.) Why was holding other human beings in bondage a cause worth fighting for, other than money? When most of the white men who died for the Confederacy were as poor as church mice?

Yes, it is hard to imagine we have come to this moment in the early years of the 21st century. As a life-long fan of Star Trek, who lived to see the first black Vulcan elected to the Presidency of the United States, this entire situation feels very like something out of the back of Gene Roddenbery’s mind. (I love that MLK exhorted Nichelle Nicols to keep her job as Lieutent Uhura because she was the only black woman on television who represented black women in a position that was not a maid. It is fun and amazing to think, What would MLK think of Kamala Harris?

Roddenbery might could have imagined such a 2020, but I never might have imagined it. Today is impossible. The convergence of Donald J. Trump, the coronavirus pandemic, the unrest over police abuse and the tumbling of Confederate monuments were all unimaginable decades back. Can we seize the moment? We all must now readjust our thinking. The war has only just begun.

Chapel Hill is a truly spooky place right now. It feels like a ghost town where 50,000 young folk used to play. Now only one or two students amble about the halls. The large, long campus is populated by a small percentage of their once robust population, where thousands thronged among the century old Federal style buildings. There is nothing but grass where the silent statue once stood. The public safety officers who once wrangled teenagers to the ground like military police in a war zone are now herding them apart when they gather in crowds. The not-knowing keeps everyone on edge. But the country’s oldest public university is truly haunted by its mythical Confederate past. Even ghosts can teach us a thing or two.

Randall Kenan was a chancellor of the Fellowship of Southern Writers and a professor of English and comparative literature at the University of North Carolina–Chapel Hill. He was the author of the collections of short stories If I Had Two Wings (finalist for the National Book Critics Circle Award and the Aspen Prize, and longlisted for the National Book Award) and Let the Dead Bury Their Dead (a New York Times Notable Book and finalist for the National Book Critics Circle Award), the novel A Visitation of Spirits, and a number of nonfiction works. Kenan was the recipient of a Guggenheim Fellowship, a Whiting Award, and the John Dos Passos Prize. Kenan died in August 2020 at the age of fifty-seven.

Can Dogs Make Us
Better Writers? 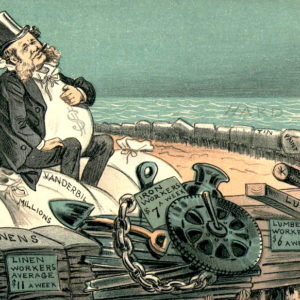 Corruption is as old as government. Yet the brazenness, the method, and the global spread of the practices that are sparking...
© LitHub
Back to top