Letter From Los Angeles: On a Generational Uprising

Héctor Tobar Reflects on History in the Making

In the days before the virus arrived, I was falling out of love with my hometown. I’d had enough of Los Angeles and its conspicuous displays of wealth, and the public tragedy of its smoky homeless camps. I was sick of the Teslas and the exotic Porsche SUVs and the gas-guzzling Expeditions cutting me off on the freeway. The thoughtlessness and self-interest of the fit and monied classes disgusted me (in California today, a toned body is a fairly reliable marker of class status). The nouveau riche had set off the insane Gold Rush of the real-estate market, forcing legions of humble folk to flee to the desert in search of affordable housing.

I missed the earnestness and naiveté of the happy, sunburnt, flabby, and unpretentious Angeleno middle class. I missed the feeling that we were all equal, somehow: not just in the Constitutional, Enlightenment sense of that word, but also in the backyard California party sense of being comrades in relaxation gathered around barbecues and inflatable kiddie pools. In the new Los Angeles, smart people know we’re all not equal, and that we never really were and might never truly be.

And then we heard news of the drama unfolding in Wuhan. The mysterious acronym, COVID, worked its way across the globe, reaching Seattle and San Francisco. Soon enough our university classes and theaters and restaurants were shut down. We retreated into our homes, and a simpler kind of living. I was liberated from my automobile. No more 15-mile daily round trips to my daughter’s high school; no more 42-mile treks across the metropolis to the university where I teach. My teenage daughter, my adult son, and my wife and I hunkered in.

For the first time in years, we ate nightly meals together at the table. We had weekly family-movie sessions, watching scenes from a mask-free past where people gathered in crowds and strangers kissed and breathed in each other’s germs. We ate healthier and we saved money. Seventy-five dollars’ worth of toilet paper arrived on our doorstep, delivered by a servant of the Jeff Bezos empire. When I had to take to the streets (for groceries, or to visit my housebound father) I guided my car through empty thoroughfares. Intersections that once held me up for two or three stoplight cycles waited for me open and free, and the only bad thing about the traffic-less freeways was that the few cars sharing the highway with me were driving way dangerously TOO fast.

Our sleep patterns changed. Freed of our daily commutes, we slept in and slept longer. And then, after weeks of quarantine, we all got bored and went to bed earlier, and rose earlier. One morning my daughter got up before dawn to take a walk, listen to the morning birdsong, and watch the sunrise. We live in a small valley that’s just a ten-minute drive (4.5 miles walking) from downtown Los Angeles. It’s a community still clinging to its bohemian past, with hillside cottages and a few unpaved roads, and native black walnut trees and scores of transplanted pines and Chinese elms. A deep and unusual quiet settled upon our valley, and this was at once comforting and unsettling.

This is what the birth of the post-Anthropocene epoch will sound like, I thought. If another virus follows this one, and then another one, eventually deer and bobcats and feral parrots will descend over our neighborhood, and they will recolonize it in the name of wildlife and natural selection. And then, one night, at 8 pm, I heard a distant howling. The coyotes are back, I thought. A pack is free in the canyon, hunting for dogs and cats to eat. But no. These were people, yelling. In some sort of ritual. My wife explained it to me: “It’s for the first responders. To show support for them.” The howling was repeated every night at that hour, and each night my daughter joined them enthusiastically, in a high-pitched yell that was a rough imitation of the coyotes, but more joyful than those animals ever sounded. Each night, more neighbors howled, and beat on pots and pans, and one played an electric guitar, and even though we could not see them (and rarely talked to them, even before the quarantine) we were, for the 90 seconds or so the ritual lasted, joined with them in an improvised, communal performance of music and human longing.

While we grew content in this simpler, quarantined existence, reports of the suffering around us came to us via our Zoom links. One of the students in the two classes I was teaching reported that her father had lost his job; she feared he would soon lose his home because he couldn’t make his mortgage payments. Another student missed class repeatedly because he’d taken a job to help out his family—delivering packages for Amazon. I ventured into downtown and saw the homeless wearing masks. One afternoon I jogged through Chinatown, and the empty streets resembled the landscape of a dystopian video game; like an animated character being guided by button clicks on a game controller, I wove past people-less restaurants and shuttered warehouses, and grim, silent alleyways.

I thought of all that ash falling on Los Angeles like a delicate, gray snow.

The weeks became months and the Internet brought images of another kind of suffering from the world outside. I saw a black man taking a neighborhood jog, much like my own, being hunted and shot down in Florida. I witnessed the slow strangulation of another black man, in Minneapolis. Once again these faraway events became a thing creeping closer to us, until, on a warm spring afternoon, we heard the distant wailing of many police and fire sirens. A curfew order arrived on our phones. We were not allowed to venture outside, said the text alert—except for “the homeless, who are sheltering in place.” I called my father and took perverse pleasure in speaking the Spanish translation for curfew, “toque de queda,” a phrase that defined the Latin American dictatorships of the last century. “Papá, declararon toque de queda.”

On the television, I watched another kind of history being replayed: The street theater of the last Los Angeles “riot” or “uprising” I’d lived through. I saw protests, lines of police officers, looting, all photographed from cameras in the sky. A fleet of news helicopters captured groups of people entering a shoe store, grabbing boxes of luxury sneakers; and surging through the shattered safety-glass doors of an Apple store and various apparel retailers. A few buildings and patrol cars were consumed in flames. The glib news anchor inside my head deadpanned: “This happens in Los Angeles roughly every 27 years or so.” 1965. 1992. 2020. In my second novel, published some years ago, I wrote: “It’s quite a thing to be able to measure the passing of time by conflagrations one had seen, by the looting crowds and the fire-makers.” But no two historical happenings are ever truly identical.

The events of 2020 carried a signature that was more generational than anything. I saw youthful black, brown, Asian, and white faces, and I sensed their collective identification with the body of George Floyd—and a deep disgust with the rules of a consumerist, monetized society. They marched through Beverly Hills and carried signs with anti-capitalist messages. “Eat the Rich.” My teenage daughter watched a video from the hacker collective Anonymous promising dirt against the Minneapolis Police Department, and she seemed to feel exhilarated at the idea that there was a secret army out there, conspiring against power.

I went to bed one night with images of burning buildings in my head. I imagined the ash from torched stores and patrol cars floating up to my hillside, joining other layers of anthropogenic matter in the soil. The charcoal from the fires set for centuries by the Tongva people in the river canyons nearby; the soot from the annual infernos of our modern brushfire seasons, and from the Watts Riots of 1965 and the “quemazones” of 1992, when dozens of burning liquor stores sent sugary smoke into the air. I thought of all that ash falling on Los Angeles like a delicate, gray snow. Layers and layers of ash, the most elementary evidence of human existence, to be studied by archaeologists at work in some future age, when justice reigns.

Héctor Tobar's new novel, The Last Great Road Bum, will be published this August by MCD/FSG. Tobar is a Pulitzer Prize–winning journalist and novelist. He is the author of the critically acclaimed, New York Times bestseller, Deep Down Dark, as well as The Barbarian Nurseries, Translation Nation, and The Tattooed Soldier. Tobar is also a contributing writer for the New York Times opinion pages and an associate professor at the University of California, Irvine. He's written for The New Yorker, The Los Angeles Times and other publications. His short fiction has appeared in Best American Short Stories, L.A. Noir, Zyzzyva, and Slate. The son of Guatemalan immigrants, he is a native of Los Angeles, where he lives with his family.

The Elderly and Covid-19: On the Frontlines of a Pandemic 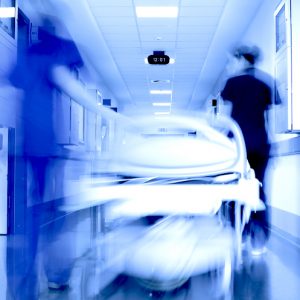 The Elderly and Covid-19: On the Frontlines of a Pandemic Nineteen years ago, about six months apart, my grandparents died. They had been my source of unconditional love. My “small...
© LitHub
Back to top