A week ago, I was up during the middle of the night trying to figure out if I was really having chest pains or if I was just tripping. Until now, I didn’t realize that these chest pains could have been attributed to the murder of Ahmaud Arbery or the exhausting situation between Amy Cooper and Christian Cooper. And before that, I felt more panic and pressure from trying to help a black mother help her son finish an English assignment minutes before the deadline to make sure he’d graduate from high school. And before that, I was in a panic because no one had heard from my brother for hours after he got off work, his phone consistently shooting straight to voicemail, something that rarely happens. Before that, I was panicking about a shortage of hydroxychloroquine because I, in fact, need it for lupus.

This was all before I learned about the murder of George Floyd.

The chest pains came back immediately after a small back and forth I had with my husband because he decided to travel to Buffalo, New York to photograph an illegal dirt bike ride out. And yes, I can pretend to blame it all on the coronavirus, but here’s the reality: I worry about the black men who are closest to me all day, every day. So honestly, my biggest fear about the Buffalo trip was that my husband could have another one of these unnecessarily dangerous-ass encounters with a police officer and never come back home.

Two days after my chest pains subsided, on May 26, I saw a few seconds of the video of George Floyd getting murdered on someone’s Instagram feed. The chest pain came back. This time I didn’t need to figure out if I was tripping or not. Oh, I felt what I felt—a dull ache. Tightness. Pain. I swiped out of Instagram, hit the side button on my phone, and watched my screen go black. I stared at the blackness until I felt a big lump rise in my throat. I knew this recipe all too well and I didn’t want to begin crying the way I know all of this can make me cry, so I pushed the lump down and tried to, I don’t know—pretend everything was okay.

But let me also show you how joy inserts itself into my life. Keep in mind I’m a native Clevelander, meaning, according to a recent study—I’m living in one of the worst cities to live in for a black woman. And perhaps you know my city’s history or you’ve seen the headlines about our infant mortality rate, and our violence, and our public education system, and our current need to declare racism as a public health crisis. And you know his name: Tamir Rice. Google Timothy Russell and Malissa Williams. Google Desmond Franklin. Then type Tanisha Anderson’s name into your search and you’ll discover that the Cleveland Police murdered all of these people. And this is how fast joy slips away from me.

I cried so hard at the good news my tears spilled into an uncontrollable laughter. Out of nowhere, I keep finding myself laughing about a recent Zoom session I had with my college girlfriends. My girl Joni recently started interviewing her friends and family and posting the interviews on her Facebook page because she’s using virtual platforms as an opportunity to connect with others during the pandemic. For our interview, Joni wanted to discuss friendship. During the interview, we laughed so hard with and at each other that Joni could barely ask us the questions she had lined up. My girl Tish was wearing a silver cami, which looked to be made out of velvet, so her sexy Zoom swag became the humorous center of everything we said. I saw so many people I knew—former colleagues, other mentees, artists, local activists, and friends. I searched the crowd for my husband, but I couldn’t find him.

These days, laughter only lasts a little while. By Friday, May 28, I was glued to the news. Minneapolis continued to burn. Other cities joined. My mentee told me Cleveland’s protest was going to be held on Saturday, May 29 at 2 pm. And I’m not going to lie, my first reaction was one of annoyance because where was this same protest energy when any of the aforementioned Clevelanders were murdered? But, I don’t like to get stuck in the past, so I asked my mentee about the location. She said she heard everyone was to meet downtown at The Free Stamp (a 35-ton sculpture that makes a nod towards the Civil War), which is problematic, but that’s an entirely different conversation that I don’t care to get into right now. Anyway, the lump in my throat returned because I knew what was next—my husband and I would be in another back and forth about him attending the protest. I knew he’d want to go. The same worry made it’s way back into my chest. Once again, this could be another dangerous-ass encounter with the police so I did not want him to go.

On the morning of Cleveland’s protest, I woke up to my husband saying, “I’ma go shoot.” “What about the coronavirus?” I quickly replied. I still don’t know how or why this was my first response. I wanted to tell him not to go. But then again, I wanted him to go. I wanted him to witness and capture history. I wanted him to be a part of history. And because of the way my husband is “built,” it didn’t even make sense for me to think he wouldn’t go to the protest. By noon, my husband’s cameras were charged and he was on his way out the door.

“I think I want to go too,” I told my husband. I had been thinking about going since Friday, but I was torn. A part of me felt obligated to go. A part of me recognized this obligation as pressure, and it didn’t feel smart to place more pressure on top of my preexisting chest pains. But that still didn’t stop my mind from swinging back and forth from go to don’t go. Every time I decided on not going, I remembered all the names on all the lists. “Naw, if you go, I won’t be able to focus because I’ma be trying to make sure you good,” my husband replied. And just like that, I wasn’t going.

And then I sent my mentee a text telling her my husband was going to the protest. She replied, “I wanna go too!” And just like that, I was going again. There was no way I could lowkey be afraid to go while my 22-year-old mentee showed no hesitation. Plus, I felt a responsibility to be there with her while she witnessed history and took a stand. So, I told my husband I was going and we made a simple plan. “I’ll FaceTime you when I get down there,” my husband said. We kissed and he left.

As soon as I arrived to the protest, all of my senses heightened. Once Na-Te’ (my mentee) and I reached the thick crowd of people, we climbed up on a platform and faced the street. A black man walked passed us, stopped, faced our direction, and thanked three white women for being there. I got annoyed. Another black man stood on top of a small school bus that was painted black and waved the Pan-African flag. My eyes flashed towards three black men who had climbed the almost thirty-foot high Free Stamp. I could feel the hot red of the stamp on their black skin. I saw so many people I knew—former colleagues, other mentees, artists, local activists, and friends. I searched the crowd for my husband, but I couldn’t find him.

I quickly realized that the protest lacked leadership—a typical Cleveland trait. One minute the crowd was chanting, “Black Lives Matter!” and then, before we knew it, “No Justice. No Peace!” Then the crowd began walking towards the Justice Center. In the middle of thousands of people, I found Black (my husband). It was a bit surreal. As we approached the Justice Center, people started to lower themselves down on one knee. Then, they quickly got up. It felt like a flash round of Simon Says. I was confused. But, things got intense as we stood facing the Justice Center and people began throwing plastic water bottles at the windows. At one point, the crowd upfront, about one hundred feet away, began running back towards where Na-Te’ and I were standing because the police started to mace them. Black locked eyes with us and yelled, “Pole! Pole! Pole! Barricade! Get behind a pole or a car!” My chest. He didn’t want us to get trampled during the stampede. But, we didn’t leave. We stood there for a good twenty minutes, even when the crowd kept running back towards us. I don’t know why we didn’t leave, but I guess I was so anchored in awe and anger and frustration that I couldn’t move.

The moment a white boy, dressed in all black, came and crouched behind the car we were standing behind and whispered something to us like, “There’s an undercover FBI agent following me. You guys don’t mind if I change clothes right here, do you?”—I got the feeling that it was time to go. He switched his hat, took some items out of his pocket and placed them in his book-bag, and then he flung one book-bag over his shoulder and another one under the car and walked away. A different white man who was standing next to us said, “We’re going to step back because we don’t know what he put under there.” We stepped back too, but we didn’t leave.

I’m still trying to figure out why we didn’t leave immediately after that. It was as if we knew nothing would instantly change in the moment, but we still waited. Perhaps all we needed was to witness the most chilling moment of the day—the people locked up on the inside banging on the walls of the County Jail, which is located inside of the Justice Center. This was proof that we all heard each other even though we couldn’t see them and they couldn’t see us. My chest lightened and Na-Te’ and I left. As we walked about 15 blocks back to our car, our backs to a part of history we will never forget—Na-Te’ turned around and screamed, “Ms. Ali!” I turned around and saw the biggest pyrocumulus cloud I’d ever seen. Thick, black puffs inched towards the sky. My mouth dropped wide open.

Today is June 2, 2020 and the reality is none of this is new. I’m talking about the chest pains and the panic and the worry and all of America’s funky-ass situations. I felt like this two months ago. I felt like this a year ago. Five years ago. Ten years ago. As it turns out, the young man I mentioned at the beginning of this has graduated from high school. My brother ended up being cool. I have yet to run out of medicine. My husband is home safe and my girlfriends and I are still cracking jokes about Tish’s cami.

Ali Black is a writer from Cleveland, Ohio. She is the recipient of the Academy of American Poets University & College Poetry Prize for her poem “Kinsman.” Her work has appeared in December, jubilat, Lit Hub, The Offing and elsewhere. Her first book of poetry, If It Heals At All, was selected by Jaki Shelton Green for the New Voices series at Jacar Press. 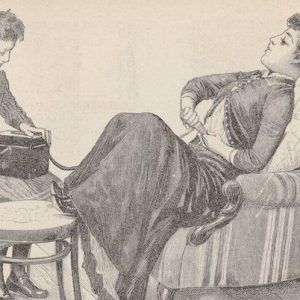 How Capitalism Created Sexual Dysfunction In the beginning was sex. And sex begat skill, and skill (or its absence) begat judgement, and judgement begat insecurity,...
© LitHub
Back to top