Let’s Talk About Love: A Lost Vocabulary of Amorous Terms

If You Love Someone, Give Them the Sheep's Eye

The following terms are from The Cabinet of Linguistic Curiosities: A Yearbook of Forgotten Words by Paul Anthony Jones.

sheep’s-eye (v.): to look amorously at someone

On January 8, 1902, it was reported that a bill had been tabled in the New York State Assembly that sought to punish “any person who is intoxicated in a public place, or who shall by any offensive or disorderly act or language annoy or interfere with any person or persons.” Although the bill’s impenetrable legalese kept its rulings fairly vague, its architect, State Assemblyman Francis G. Landon, was less ambiguous when it came to explaining who he intended it to target. As he explained to the New York Morning Telegraph, “My bill is aimed at the flirters, gigglers, mashers, and makers of goo-goo eyes in public. We have all been disgusted with them . . . so they must be brought to their senses.” Anyone caught in violation of Landon’s bill faced a $500 fine, or even up to a year in prison.

Remarkably, Landon’s bill was passed the following day. Even more remarkably, it has never been repealed—meaning flirting has officially been illegal in New York ever since.

Long before Landon’s goo-goo eyes, the flirters and romantics of 16th-century Europe had sheep’s-eyes. According to the Oxford English Dictionary, to cast or throw a sheep’s-eye has been used to mean “to look lovingly, amorously, or longingly at someone” since the early 1500s; almost three centuries later, in 1801, the poet Samuel Taylor Coleridge coined the verb sheep’s-eye, meaning to do precisely that. Sheep’s eyes aren’t especially romantic of course (although there’s no accounting for taste) but the expression apparently alludes to the sheep’s dopey, wide-eyed appearance—the same appearance that is at the root of the expression to look sheepish.

Libel is the crime of publishing a written statement that damages another person’s reputation. A love-libel is a love letter or love note, the contents of which are hardly likely to be disparaging of the person on the receiving end. In both cases, libel  is derived from libellus, a Latin word that literally means “little book.” That meaning was essentially still intact when the word first appeared in English in the 13th century as another word for a handwritten statement or document, and from there it came to mean a leaflet or a widely distributed pamphlet, before the Elizabethan playwright Thomas Dekker coined the word love-libel—literally, “a handwritten admission of someone’s love”—in 1602.

Besides jumping over fountains, a sure sign of infatuation is a love-light.

The crime of libel took a different route. In the medieval legal system, a libel was a formal document outlining the allegations raised against a plaintiff, but by the 17th century things had changed: thanks to the use of libel to refer to a publicly distributed document or pamphlet, in legal contexts libel had come to refer to the crime of publishing or circulating a defamatory statement. As that meaning began to take hold, all other meanings of the word quickly drifted into obscurity—including Dekker’s love-libel.

On the topic of which, on 10 January 1845 a brief letter was sent from Telegraph Cottage in Hatcham, Surrey, to 50 Wimpole Street in Marylebone, London. “I love your verses with all my heart,” the letter began, “and this is no off-hand complimentary letter that I shall write.” The note was the very first love letter sent by Robert Browning to his eventual wife Elizabeth Barrett, whose lengthy courtship via a total of 573 items of correspondence is one of English literature’s most enduringly romantic tales.

love-light (n.): a romantic glimmer in a person’s eyes; an infatuation

On 12 October 1786, the future US President Thomas Jefferson wrote an aching love letter to a young artist he had met while in Paris named Maria Cosway. Jefferson’s letter, known as his “Dialogue Between the Head and the Heart”, contains some of his most emotive and revealing writing:

Having performed the last sad office of handing you into your carriage at the pavillon de Denis, and seen the wheels get actually into motion, I turned on my heel & walked, more dead than alive, to the opposite door, where my own was awaiting me . . . Seated by my fireside, solitary & sad, the following dialogue took place between my Head & my Heart:

Head. Well, friend, you seem to be in a pretty trim. Heart. I am indeed the most wretched of all earthly beings. Overwhelmed with grief, every fibre of my frame distended beyond its natural powers to bear, I would willingly meet whatever catastrophe should leave me no more to feel or to fear.

By the time the pair met, Jefferson was a widower, but Cosway was married. Their relationship was destined to go nowhere, but his infatuation was unquenchable: once, while walking with Cosway through a Paris park, Jefferson jumped over a stone fountain in his excitement. He fell and broke his wrist.

Besides jumping over fountains, a sure sign of infatuation is a love-light—a term coined in the mid 19th century for the radiant spark or glimmer that can be seen in a lover’s eyes.

Jane Austen was born on 16 December 1775. All six of her major novels have remained enduringly popular since they were written in the early 19th century, and her ability to challenge the idealistic, sentimental writing style popular among other writers of the day—replacing it with a more ironic and realistic tone—has established Austen as perhaps the greatest English authoress of all time.

But while her great literary heroines all eventually found love, Austen herself never married. She did, however, accept a proposal of marriage—albeit for only one day.

Shortly before her 27th birthday, Jane and her family were staying with her friends Elizabeth, Alethea and Catherine Bigg at Manydown Park in Hampshire. While they were there, the Biggs’ brother, Harris Bigg-Wither, proposed to Jane and she accepted. Jane’s niece Caroline later recalled that Harris, who was almost six years younger than Jane, was “very plain in person” and “awkward, and even uncouth in manner.” But as the heir to the Biggs’ grand estate, “the advantages he could offer . . . and her long friendship with his family, induced my aunt to decide that she would marry him.” By the following morning, however, Jane had reconsidered. Deciding that she could not marry someone she did not love, the engagement was called off almost as quickly as it had been arranged.

A short-lived romance is a passade. Borrowed into English from French, passade literally means a “passing” and originally referred to a technique of walking a horse back and forward over the same patch of ground when it first appeared in the language in the 17th century. The romantic notion of a “passing” flirtation or romance emerged later, in the early 1800s.

Derived from an ancient French word, drut, for a friend or lover, the word drury first appeared in the language during the Middle English period, when it was originally used to refer to love or courtship, or to a clandestine affair. Before long that meaning had developed, so that by the 14th century a drury was a sweetheart, a beloved person or treasured object, or else—in a sense that remained in use right through to the late 1500s—a love token or keepsake, or a gift from one lover to another.

As love-druries go, one of the most famous (and most peculiar) in history was arranged on this day. On 23 December 1888, while living at Arles in the south of France, Vincent van Gogh sliced off his left ear before wrapping the appendage up and allegedly delivering it to a local housemaid, with whom he was besotted.

Van Gogh had earlier moved to Arles from Paris in the hopes of establishing an artists’ commune, and was later joined by his friend and fellow artist Paul Gauguin. After two months of living together, the pair had a violent argument that ended with van Gogh first threatening Gauguin with a knife, before turning it on himself.

The incident has since become one of the most famous in art history, but precisely how much of it is true is debatable. Some versions of the story claim the girl in question, known only as Rachel, was a prostitute not a housemaid, while others question whether van Gogh was indeed in love with her or merely experiencing a delusional fit of madness. Whatever the truth, in the aftermath van Gogh was hospitalized in a mental institution in Saint-Rémy to recover. Tragically, he died of a self-inflicted gunshot wound just two years later, in July 1890. 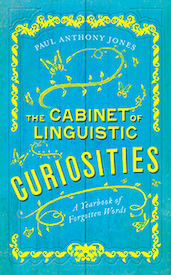 Paul Anthony Jones is a writer, etymologist, and language blogger. He is the author of several books on language, including, most recently, The Accidental Dictionary. He shares his linguistic discoveries via the Twitter account @HaggardHawks, which was named one of Twitter’s best language accounts by Mental Floss. He lives in Newcastle upon Tyne. 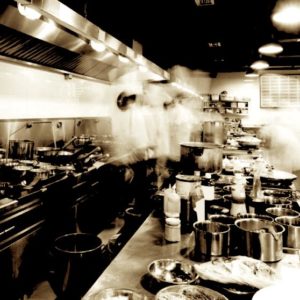 The harried, hardworking chefs and restaurateurs who find themselves on the wrong end of a harsh review are under no obligation...
© LitHub
Back to top
Loading Comments...