Lessons From Shakespeare: How to Survive a Pandemic with Humor

Allie Esiri on Taking Daily Doses of the Bard

Plague tore through Shakespeare’s London in what, until recently, felt like a bygone, pestilence-ridden era. That plague decimated the capital’s population with recurrent outbreaks and bringing with it the kinds of draconian measures with which we’ve become familiar in 2020, not least the closure of public venues.

But while curtains remain down indefinitely in many theatres across the globe (and at the Globe), all the world has become the stage on which an all-too-real tragedy is playing out—one filled with individual loss and longing, and political sound and fury. Nevertheless, although we may have little idea of when we’ll be able to enjoy a performance of one of Shakespeare’s plays in person once again, his writing could scarcely feel more urgent, relevant and illuminating than it does now, in this most confounding of times.

It’s true that there isn’t a play in which Shakespeare explicitly dramatizes the plague of his own day, perhaps since he was seeking to offer his audiences an escape from, rather than a reminder of, the suffering and worry that awaited them beyond the theatre walls. Outside of Mercutio’s wrathful curse, “A plague o’ both your houses,” the word itself is only used sparingly—but often to great effect. In Timon of Athens, the eponymous ruler evocatively instructs his general Alcibiades to “be as a planetary plague” when he tears through the city; while King Lear—a play written during the 1606 theatre closure—meanwhile features the seemingly ever-apposite line “Tis the times’ plague, when madmen lead the blind.”

Curiously though, the plague doesn’t exclusively feature as a cause of worry, but sometimes as a source of comedy. Twelfth Night’s Olivia humorously equates the pandemic to the sickness of love when she says “even so quickly can one catch the plague,” on falling for Viola. This would certainly have gotten a knowing laugh from the Elizabethan audiences, for whom such gentle gallows humor would have served to recontextualize and demystify the invisible menace that shrouded their everyday lives. For those of us reading today, this line not only carries a suddenly timely resonance, but it teaches us the value of subverting and translating our pain into a stolen moment of levity which helps diminish our fear.

No writer has better mined the depths and variety of human experience and emotion.

But the enduring pertinence of Shakespeare’s verse rests less on its specificity than its immaculately articulated universality. His works never aimed to neatly taxonomize humanity nor to prescriptively tell its audiences how exactly to think or feel. Instead, it’s the fact that he always championed our commonalities, and the plurality of emotions and opinions that define us, which allows it to transcend eras. Four hundred years on, we can still rely on the playwright to help ground us in—and make sense of—the current crisis, even in texts that make no direct allusion to the pandemic.

No writer has better mined the depths and variety of human experience and emotion. As we try to come to terms with the gamut of feelings elicited by this strange new COVID-ridden world we inhabit, we can do a lot worse than turn to Shakespeare for guidance. For instance, amidst the relentless brutality of Macbeth we can find lines that galvanize us in our sorrow, that encourage us to express and share our pain. Malcolm’s wise and heartfelt words to Macduff—“Give sorrow words: the grief that does not speak / Whispers the o’er-fraught heart and bids it break”—delivered when the latter learns his wife and children have been murdered, offer advice that is truly timeless, especially in this year where we may be cut off from our friends and family and more inclined to keep our emotions to ourselves.

When we’re filled with longing for our much-missed loved ones, we find good company in the anguished (and slightly needy) sonnets or perhaps the most famously lovelorn character in literature, Juliet. As we count down the days, weeks and months until we might be able to reunite with those closest to us, we may find ourselves anxiously pleading time to go faster as she does when she declares, “Gallop apace, you fiery-footed steeds […] Come, night; come, Romeo; come, thou day in night […] so tedious is this day / As is the night before some festival / To an impatient child that hath new robes / And may not wear them.” But, as we know, her youthful impulsiveness (she is, after all only 13) and her heady encouragement of time’s ravishing pace in no small part engenders her tragedy—and we too would all do well to heed the warning to keep our patience.

Of course, there will be times in which we search for a more light-hearted escape, or some lucent hope to cut through the present darkness. Shakespeare was, after all, a master of antithesis— a nonpareil dramatist across tragedy and history as well as romance and farce.

And there is plenty of that—from the flirtatious sparring of Benedick and Beatrice in Much Ado About Nothing, “Do not you love me?” / “Why no, no more than reason,” to the jaw-dropping reunion of the twins in Twelfth Night, “I should my tears let fall upon your cheek, / And say ‘Thrice-welcome, drowned Viola!”—to lift even the most despondent of readers. Indeed that joyful reunion of Viola with her long lost brother Sebastian (after they believed each other dead), may have once seemed like little more than a fanciful, ingenious plot device; now it is freighted with an immediacy and hope for our own reconciliations.

A daily dose of Shakespeare’s verse serves not only to fuel our introspection but encourages us to look outside of ourselves (and our windows).

The sense of refuge and optimism afforded by some of Shakespeare’s more playful works is similarly evoked by his transcendent words on the myriad wonders of nature. It is easy to forget, when beguiled by the psychological complexity of his characterizations or the intricacies of his plotting, that Shakespeare also excelled as a pastoral poet. A native of rural Warwickshire and the grandchild and son-in-law of farmers, he was certainly au fait with the natural world that lay beyond the dank and disease of Elizabethan London. It is in these bucolic passages that we find Shakespeare at his most hopeful, his words most soothing. In a year in which we’ve been largely kept cloistered indoors, so many of us quarantined in concrete cities, we can be transported to different landscapes, carried away by the richness of Shakespeare’s verse. Observations such as this by Perdita in A Winter’s Tale also invite us to actively pay closer attention to nature so that we appreciate not just its colors but its equilibrium and never-ceasing vitality: “daffodils, / That come before the swallow dares, and take / The winds of March with beauty.”

The above is just one of innumerable instances in which Shakespeare embraces the mutability of nature in his writing. The caprices of the seasons is a theme to which he keeps returning, often as a metaphor for the process of aging and the changeability of human life. This shows up, notably, in Sonnet 104, when the speaker considers how though the seasons turn and his lover may age, the memory of the latter’s beauty will never wither: “For fear of which, hear this, thou age unbred: / Ere you were born was beauty’s summer dead.” These bittersweet reflections on the passing of time can feel almost unexpectedly welcome as our days and months blur into one another and we can feel mired in stasis

And yet, a daily dose of Shakespeare’s verse serves not only to fuel our introspection but encourages us to look outside of ourselves (and our windows) and to observe the infinite variety that life has to offer, even during this year in which “Tomorrow, and tomorrow, and tomorrow, creeps in this petty pace from day to day.” 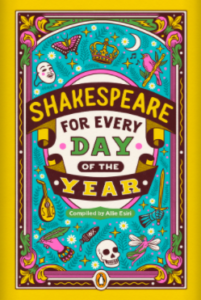 Shakespeare for Every Day of the Year by Allie Esiri is available via Penguin Books.

Allie EsiriPenguin BooksShakespeare for Every Day of the Year
Share:

Allie Esiri is a former English stage, film, and television actress and has been in numerous productions of Shakespeare's plays, including performances with the English Shakespeare Company. A lifelong lover of Shakespeare's poetry, she also studied Medieval and Modern English at Cambridge University.

40 Bookstores in 40 Weeks: Or, How to Get Through a Pandemic 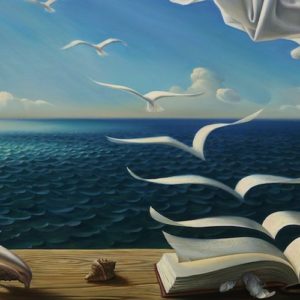 From essays to interviews, excerpts and reading lists, we publish around 300 features a month. And while we are proud of all the 3,000+...
© LitHub
Back to top
Loading Comments...