Lessons From a Nightmarish Writing Workshop

I couldn’t believe it. I couldn’t believe what I’d heard, and I quickly scanned her written comments, which confirmed what I’d just heard. Banal observations, stereotypes one-dimensional. The ending is overt and lacks intrigue. It reads formulaic insert-cliff-hanger.

I felt stranded with the student, who, like most writers, struggled with doubt and fear, plus bills to pay. A punch to the head, that’s what it felt like. And to the heart. It was as if someone had confirmed a writer’s worst fear—you’re a crummy writer, and there’s no hope for you. The expression on the writer’s face confirmed all that I imagined. I felt awful.

I’m not a newbie teacher—going on 14 years—but I’d never felt the room twist into such tense stillness as if all the air had whooshed out of it, leaving us gasping. I feared for the writer and the other students with their astonishing creative souls like shy animals who came out only when they felt safe. Jabbing my thoughts were the tragic accounts of ex-writers who’d gone to MFA programs where workshops like this were the norm, and now these writers no longer wrote.

After the break in the workshop session and after I’d walked myself down from the ledge of shock, I reminded the class that we were here to support each other. Caught up in the heat of the moment, I probably said a bunch of other stuff—how our culture didn’t value art or the artist, so we had to; we had to step up and nurture the artist. Corporate culture failed to safeguard the environment, let alone humanity, so we had to. We stood as a counterpoint to capitalism with its emphasis on profit and consumption. We created, which was a revolutionary act. We, the revolutionaries, had to stick together. Well, you get the picture.

The next day, I got an email from a student who said she was dropping my workshop. “I don’t envy all the work that you have to do to create that safe and supportive space.”

She didn’t think she could write in such an environment.

I understood. It took courage to step into the unknown and wrestle something onto the page. It took more courage to bring that thing in and show it to others. How could I ask them to do this if someone was waiting to beat the thing on the head?

I went to bed and slept poorly. At 2:00 am, I came up with my first rule: Email me your critiques before class. I may ask you to revise your comments.

She sent me her critique. I asked her to revise it.

I wrote to her: “I don’t think the writer will be able to hear what you’ve written because your comments border on ad hominem attack. I know you’re open to learning how to be more effective in helping writers. Please include at least three things that work in the story.” What I was really asking her to do was widen the lens through which she looked at the story (and maybe the world?) and find the good.

I tried not to call on her, but she barged in anyway.

Two more classes went by, and though she noted three strengths in her critique—one sentence per item—she refused to speak of the good, the little glimmer on the page. I scrambled to fill the silence, as did the other students who bravely carried on. But a dark storm cloud hovered above our heads, one that threatened rain.

At the break, a student asked if he could speak to me. He put it in the kindest, gentlest terms, but basically, he said the workshop was not going well. The students were tired of her. They were also scared. How could they write under such conditions?

I came up with my next rule: Everyone had to say out loud at least one strength of the work. If someone said what you were going to say, you had to come up with something else. If you didn’t speak up, I’d call on you.

She offered something, a morsel. A little ease in the room, which quickly vanished when it came time to discuss what could be developed further. She had a long list, spoken in a pained, frustrated tone as if she couldn’t believe she had to revisit the most basic of things. The pace was glacial, she told the class, she could barely get through it. She had other things to say. I could sense the writer cowering.

After that, I tried not to call on her, but she barged in anyway. We had another ten weeks together. How would we last? I gave another lecture/reminder/plea: We writers had to dare to go to the edges, those vulnerable places where most people, with sound minds, didn’t willingly go. We had to sit in the rawness of fear, rage, fragility, so we found something real. It was hard work. Please keep that in mind. I think I mentioned the Golden Rule.

It didn’t do any good.

My next rule: Raise your hand. Wait to be called on.

During the break in the workshop session, I asked to meet with her. She was trying, she told me. She genuinely wanted to help other writers, but she wasn’t willing to sacrifice her aesthetic standards. She admitted she felt an aversion to praise and automatically distrusted it.

As she spoke, I got an image of this harsh, judgmental voice inside her. It looked like a big-bellied tyrant, hands in fists, yelling at the world, at her, “It’s no good! Just who do you think you are?” When I commented on this internal voice, her eyes filled with tears.

More weeks went by. I met again with the first student who’d come to me with his concern. Another student emailed me—She’s out of line. Everyone is uncomfortable.

I sent out a new email—basically stating, please be kind. Life is hard enough. Thank you! wrote the student.

In the middle of the night after another tension-filled workshop, I came up with the next rule: When you suggest something to be developed further, only state one thing, so others can comment, too.

In class, she raised her hand and told us one thing that wasn’t working. Another student raised his hand and provided a counterpoint. She raised her hand and had another thing that wasn’t working. Another hand went up. It went like that: con/pro, call/response, point/counterpoint. There was a leveling of the field, at least a bit. I thought it was going well—at least better. In some ways, I felt like I’d become the kind of parent I wished I was at all times with my children. Rising above my fury and frustration, not reacting (at least not in class) but reflecting, deliberating, coming up with solutions. I achieved a sort of grace—momentarily.

Week 8. A student turned in his submission. A raw, first draft, maybe only a couple days old. One of those rushes of inspiration that grab you by the neck, convincing you it’s the best thing you’ve ever written. Maybe better than anything that anyone in the world has ever written.

She emailed me. “I’m offended by this work—how can I critique it? This isn’t graduate-level writing.”

I told her to find three strengths and three weaknesses. She didn’t show up to class. The workshop went smoothly. It felt like all the workshops I’d taught in the past. My shoulders relaxed. Laughter rang out. Two students commented afterward it was the best workshop we’d had so far.

Then it was her turn to submit work. I read through the emailed critiques before class. The other students were generous and full of compliments, except for one who wrote that he couldn’t find anything good to say. (Revenge?) I told him to try harder.

She told the class she wanted to give this story life, to honor her characters, that it meant everything to her, this story. And then she began to cry.

I read her submission, then reread it and walked around the block, thinking about it. Over the next couple of days, I thought about it some more. One scene had shifting points of view. In a different section, the novel settled into a singular point of view, a drug addict who would die by the end of the chapter. It was unorthodox to shift points of view so often in one scene. Head hopping, it was called, and typically not done because it tended to confuse the reader and undermine the reader’s emotional experience. But just because there was a rule against it didn’t mean you couldn’t do it. How was it working? What was the effect?

Why structure it this way? I asked the class. That’s the question for the writer. I didn’t get lost, said one student. I knew whose head I was in. I told them what I felt was the effect. The craft choices reflected the themes of community versus the individual. A community that was knitted together, one character almost completing the thought of another. And then the individual, the outcast, the one who didn’t fit in and met with a sad ending. Community versus the individual. If this was a theme, the structure mimicked it.

She told the class she wanted to give this story life, to honor her characters, that it meant everything to her, this story. And then she began to cry. The class was stunned—a different stunned this time, as if something was cracking and warmth was flowing in. Everyone looked around and sought each other out, making eye contact as if to reaffirm what was happening, to check and double-check that something was happening, and the room was alive and beating with a lively pulse as if a community was finally formed.

Week 12. I received an email from a student: “Just wanted to say that whatever you’ve done/been doing seems to be working, so thanks for that. It’s making a difference.”

Nina Schuyler is the author of the novel, The Translator, which won the Next Generation Indie Book Award, and the novel, The Painting, a finalist for the Northern California Book Award, and How to Write Stunning Sentences, which was a Small Press Distribution bestseller. She teaches at the University of San Francisco, Book Passage, The Mechanics' Institute, and The Writing Room. 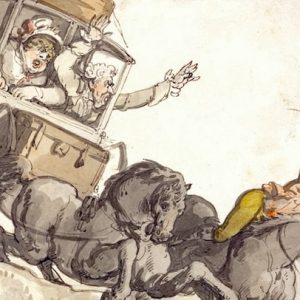 Was there ever a fragment like Jane Austen's Sanditon? The distinguished novelist suffering a long decline—her brother...
© LitHub
Back to top