Layli Long Soldier Confronts the Duplicitous Language of the US Government

Three Poems from the New Collection, Whereas

Layli Long Soldier’s Whereas confronts the coercive language of the United States government in its responses, treaties, and apologies to Native American peoples and tribes, and reflects that language in its officiousness and duplicity back on its perpetrators. Long Soldier’s work has been described as, “Elegant and painful, formally surprising, personal and historic […] a fearless, polyphonic crossing of cultures and languages in the service of both tenderness and trenchant critique.”

RESOLUTION OF APOLOGY TO NATIVE PEOPLES OF THE UNITED STATES

Acknowledgment of Apology. –The United States, acting through Congress–

(5) expresses its regret for the ramifications of former wrongs and its commitment to build on the positive relationships of the past and present to move toward a brighter future where all the people of this land live reconciled as brothers and sisters, and harmoniously steward and protect this land together; 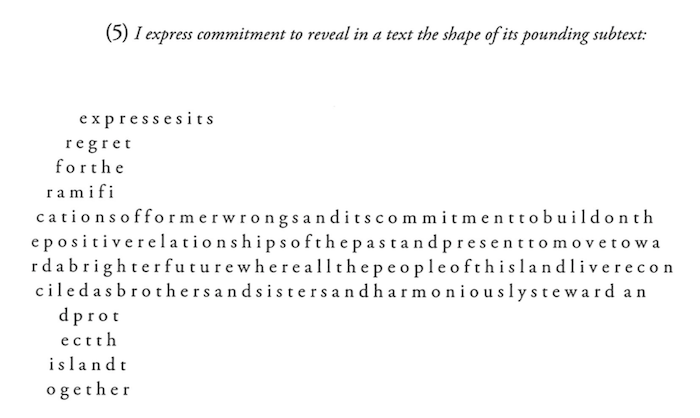 Below is Long Soldier’s “Resolution (6),” from a sequence that responds to the 2009 Congressional Resolution of Apology to Native Americans. After the opening paragraph, the text at left is from Mark K. Tilsen (Pine Ridge, South Dakota) in his Facebook post, September 20, 2016; the text at right is from Waniya Locke (Standing Rock, North Dakota) in a personal interview conducted by the author, September 19, 2016.

To speak to law enforcement

have been painstakingly drafted

who what when where why

at behest of the local leadership

and are the guidelines

the probable cause for stopping me

for the Oceti Sakowin camp

I acknowledge a plurality of ways

does that seem reasonable to you

don’t give any further info

People ask why do you bring up

so many other issues it’s because

we are peaceful & prayerful

these issues have been ongoing

“isms” have no place

here we all stand together

we teach the distinction

we are proud to stand

btwn what’s legal & what isn’t legal

it’s a choice to be a Protector

or what could be construed as weapons

of speech it’s a right

property damage does not get us closer

all campers must get an orientation

free from seizure of person or home

& civil disobedience: the camp is

for everyone taking action

an act of civil disobedience

now the law protects the corporation

so the camp is illegal

we keep each accountable

you must have a buddy system

someone must know when you’re leaving

this is a ceremony

& when you’re coming back

RESOLUTION OF APOLOGY TO NATIVE PEOPLES OF THE UNITED STATES

Acknowledgment of Apology. –The United States, acting through Congress– 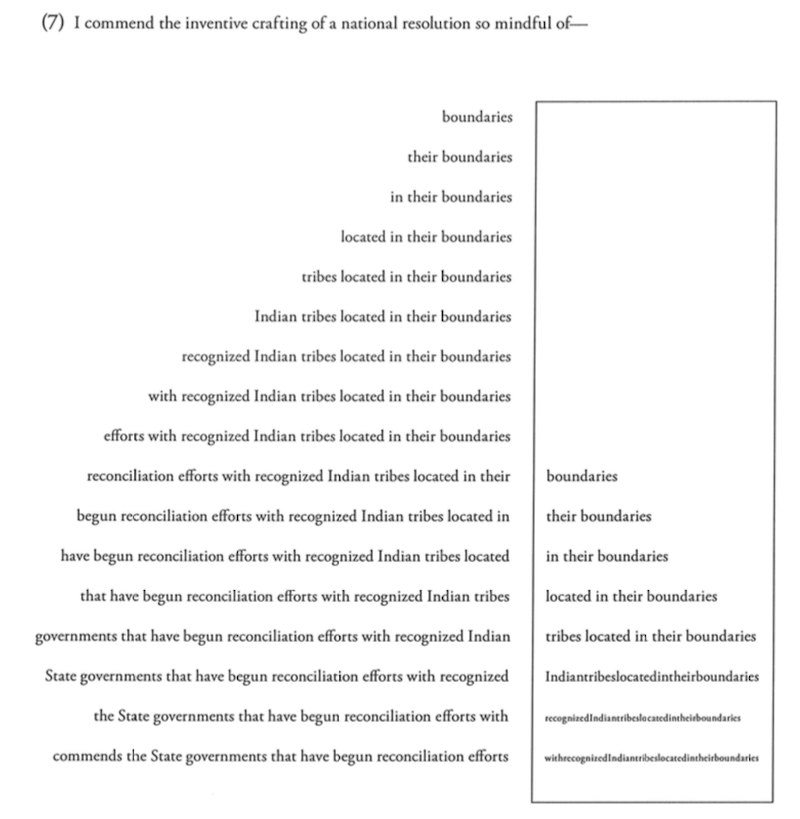 Layli Long Soldier holds a BFA from the Institute of American Indian Arts and an MFA from Bard College. She is the recipient of an NACF National Artist Fellowship, a Lannan Literary Fellowship, and a Whiting Award. She is the author of Chromosomory (Q Avenue Press, 2010) and WHEREAS (Graywolf Press, 2017), which received the 2018 PEN/Jean Stein Award and the 2018 National Book Critics Circle Award and was named a finalist for the 2017 National Book Award. She resides in Santa Fe, New Mexico.
Share:

How to Make a Unicorn and Other Lost Facts of Animalkind

Trump in a Toga? On the Lessons (or Lack Therof) in Historical Fiction 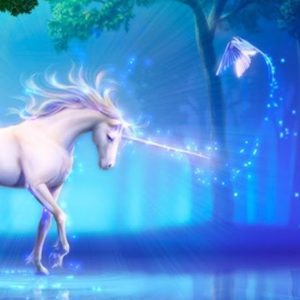 How to Make a Unicorn and Other Lost Facts of Animalkind When Elena Passarello was a girl, her grandparents took her to see a unicorn. Lancelot was a “creamed-rinsed, mutant goat...
© LitHub
Back to top
Loading Comments...