Some nights, that deep cold lake brings my child self back to me again. This is often without my consent. I want no part of the person I was then, or to be back in the town of those years that made and held me. Cooperstown, where I was born, is a speck in-the-middle-of-nowhere New York, so small it is officially a hamlet, so pretty with its flower boxes and groomed hedges and American flags that it has been transformed into an object, its citizens offering the place up every summer for the pleasure of thousands of boys and men who come for baseball and nostalgia and a glimpse of their own child-ghosts. Can a town be objectified like a woman? If she is Cooperstown, she can.

In my dreams, the lake first sets me down at the Presbyterian church atop Pioneer Street, thin, tall, ancient, a building made of whittled bones, where I was long ago given the gift of awe but also of torment, the three-hour services with an indifferently talented choir and the crotch of my itchy woolen tights slowly sliding down my thighs. Through the rest of the week, I would bear the oppressive weight of a male god who was always furious at the tiny rebellions of my mind. I was defective because I feared far more than I loved. A mouse, this child me, blonde, pale, blinking, bewildered, scared. In the dreams, even as I repudiate her, this child self goes away from the church as fast as she can, flying down the hill toward Main Street. It is empty of cars and people, the single stoplight westward along the street shining against the wet asphalt, glazing the windows of the bakery in alternate red and gold and green, the cord of the great flagpole in the center of the street where I stand chiming in the small wind. From there, the street scoops downhill to Lakefront Park, where the statue of Natty Bumppo hunts with his dog, until at last it empties out into the dark glower of the lake.

It is this strange long lake, a block away, that peered from over the lawn into the windows of my childhood bedroom. Before I rose from bed every morning I would look out to gauge the lake’s mood that day, which could change with terrifying swiftness. There would be temper tantrums when the dust-devils grabbed loose snow up from the ice and spun it to frantic dancing; placid happy days of sunlight on the warm, navy blue August water; pen- sive sheets of fog lifting gently off its surface in an orange autumn dawn; thunderstorms descending from Cherry Valley nine miles north in luxurious woolen sheets of gray. We had a party every Fourth of July, where from our lawn we’d watch the fireworks double themselves on the water below, the hills grabbing the thunder of the explosions and tossing it back and forth between them until a new blast came and the old thunder was lost. The lake has always been pure intensity, beauty, terror to me.

I lay down in the dark road to scare myself and was nearly run over by some quiet car.

And in my dreams the child me stands hapless at the flagpole, trying to resist its pull, but inevitably the lake draws my ghost down, toward this wild and uncontrollable and inescapable depth of feeling.

This is what I dislike, the way that as a child I felt absolutely everything, and it was all unbearable. I had a good childhood, I was fed and loved, but I was born unskinned, a girl bleeding out her hot red emotion everywhere. There were days I felt I would die of the sound of the crows eating the corn in my father’s garden or the taste of the honey I stole from the back of the pantry—sugar forbidden in my house, pleasure suspect—and spread surreptitiously on the hot biscuits I baked before swim practice. The membrane between my interior self and the world was easily rent. I could contain nothing within me. I am not quite sure how I survived. And everywhere I went in town, even in places where you couldn’t see the lake, you knew it was there, gleaming; it was my overlarge mirror, unskinned like me, shining the sky back to itself, too emotional, too much, too dangerous, you could drown in it.

A dreamer at last awakens into life. The lake’s nighttime draw fades until I wake in the mornings as an adult who has grown the calluses necessary to keep herself alive. Still, even as an adult, I am reluctant to come home. It has been almost a decade since I’ve been back to Cooperstown; my parents have moved away, there is no obvious reason to return. And so I have kept the place safe, stuck in aspic, somewhere deep inside. There is a beauty in this resistance, because the layers of time and space in me can be preserved unmixed. In this way, the bend where Lake Street descends to Council Rock exists as many things all at once: the spot where one Halloween in middle school, I lay down in the dark road to scare myself and was nearly run over by some quiet car, where I stepped on a flotsam board and drove a nail through my foot, where my first friend and I crouched, seven years old, scraping wet stones on stones to paint our faces and make ourselves warriors. To see the ways the town has changed, the trees loved decades ago dead and vanished, the buildings altered, the old friends startlingly old and stout and gray, looking like their parents as they bend their heads into the wind, crossing the street, no, no thank you, I cannot, it would be too much. The fragile defenses I have constructed against the overwhelm of the world would break. Anyone could see straight into my depths. And so I sacrifice, night after night, my child self to the lake, both self and lake through dream rendered subject, not object. Perhaps a ghost is a person and a place dreaming at the same time. I let my subconscious draw this trembling, world-sick child down to Lakefront Park, which in my sleep is simultaneously draped in night and too brightly daylit, the sun blazing the water hurts my eyes. In this place I once saw a flock of mallards peck a sickly drake to death, and my golden retriever would hie herself there to lap up the grease the motel’s restaurant set outside to cool, and my lovelorn best friend and I would eat whole pints of ice cream to find a foothold for self-hatred, and I once waded in after a frisbee and sank up to my hips in duck shit and had to be pulled out with a rope. All of it, all, remains as it has ever been, living, tender, wild.

This piece is published from the Freeman’s issue on change, which will be published on October 12th from Grove Atlantic.

Lauren Groff is the author of three novels, The Monsters of Templeton, Arcadia, and Fates and Furies, and the short story collections Delicate Edible Birds and Florida. She has won the Story Prize, has been a finalist for the National Book Critics Circle Award and the Los Angeles Times Book Prize, and has twice been a finalist for the National Book Award. She was a Guggenheim fellow and named one of Granta magazine’s 2017 Best of Young American Novelists. Her work has been published in thirty languages. Her fourth novel, Matrix, was published September 2021. 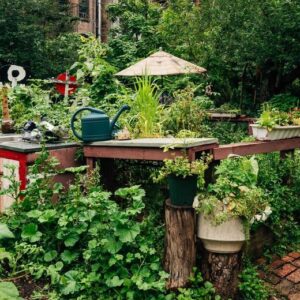 How to Help the Environment—and Yourself—by Fostering Insect-Friendly Habitats We often feel helpless in the face of huge, global conservation issues such as climate change, tropical deforestation or the demise...
© LitHub
Back to top
Loading Comments...