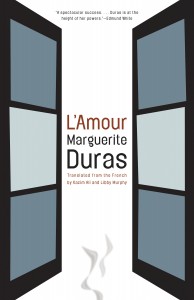 Marguerite Duras was born in Vietnam (then Indochina) to French parents. Associated with the nouveau roman French literary movement, she is most well known for The Lover, an autobiographical work that received the Goncourt prize in 1984. In this L’Amour, a traveler arrives in the seaside town and comes face to face with his past though an ex-lover, “her.”

The man stands on a boardwalk over the sand.

He does not move. He watches.

The sea, the beach, a few tidal pools, flat surfaces of water.

Between the man who watches and the sea, far off, all the way at the water’s edge, someone walking. Another man. Wearing dark clothes. From here his face is indistinct. He walks, going, coming, he goes, comes again, his path is rather long, never changing.

Somewhere on the beach, to the right of the one who watches, a movement of light: a pool empties, a spring, a stream, many-mouthed streams, feeding the abyss of salt.

To the left, a woman with closed eyes. Sitting.

The man who walks looks nowhere, looks at nothing, nothing but the sand in front of him. His pace is steady, unceasing, distant.

The triangle is completed by the woman with closed eyes. She is sitting against the wall that separates the beach from the town.

The man who watches is between this woman and the man who walks along the edge of the sea.

Because of the man who walks, constantly, with his slow, even stride, the triangle stretches long, reforms, but never breaks.

This man has the even steps of a prisoner.

The sea, the sky, fill the space. Far off, the sea, like the sky, already oxidized by the shadowy light.

Three, three in the shadowy light, a slow-shifting web.

The man is still walking, coming, going, before the sea, the sky, but the man who was watching has moved.

The even sliding of the triangle ceases.

He begins to walk.

The man who was watching passes between the woman with closed eyes and the other, far away, the one who goes, who comes, a prisoner. You hear the hammering of his steps on the boardwalk. His steps are uneven, hesitant.

The triangle comes undone, reforms. It comes apart. The man passes. You see him, you hear him.

You hear: his pace slacken. The man must be looking at the woman with closed eyes sitting before him.

Yes. The steps stop. He looks at her.

Only the man who walks along the sea continues his movement, his unending prisoner’s pace.

The woman is watched.

She sits with her legs stretched out. She is in the shade, huddled against the wall. Eyes closed.

Unaware of being seen. Not knowing she is being watched.

The man who was watching has gone by. His steps fade. He can be seen, he walks toward a sea wall between the woman and the one who walks along the shore. Past this sea wall, another town, and farther still, distant, another town, blue, begins to blink with electric lights. Then other towns, more, more of the same.

He comes to the sea wall. He does not pass it.

He sits on the sand, facing the sea. He ceases to see any of it, the beach, the sea, the man who walks, the woman with closed eyes.

For one moment, no one watches, no one is seen: neither the mad prisoner who is still walking along the shore, nor the woman with closed eyes, nor the seated man.

For a moment, no one listens, no one hears.

And then there is a cry: the man who was watching closes his eyes, seized by a feeling that lifts him, lifts him up, lifts his face up to the sky, his face contorts, and he cries out.

A cry. Someone cried out over by the sea wall.

The cry uttered and heard throughout space, whether occupied or empty. It has torn the shadowy light, the stillness. The steps of the man who walks have not stopped, have not slowed, but she, she lifts her arm slightly, like a child, covers her eyes, stays like this a couple of seconds, and he, the prisoner, this motion, he has seen it: he has turned his head in the direction of the woman.

But now it becomes visible. It is already tracing itself onto the sand, on the sea.

The man who was watching returns.

Again his steps are heard, he is seen returning from the direction of the sea wall. His pace is slow. His gaze distracted.

As he approaches the boardwalk, a rising noise, cries, cries of hunger. Seagulls. They are there, were there, all around the man who walks.

The steps of the man who was watching.

He passes before the woman. He comes within range of her. He stops. He looks at her.

We will call this man the traveler—if there is need—because of the slowness of his stride, the distractedness of his gaze.

She opens her eyes. She sees him, looks at him.

He comes closer to her. He stops. He has reached her.

–What are you doing here, night is falling.

She gestures before her, the sea, the beach, the blue town, the white roofs beyond the beach, everything.

He turns: the man who walks along the shore has disappeared.

He takes another step, leans against the wall.

He is there, next to her.

The intensity of the light changes, is changing.

It grows white, changes, is changing. He says:

–The light is changing.

She turns slightly toward him, she speaks. Her voice is clear, so gentle and mild, nearly frightening.

–You heard someone cry out.

Her tone does not invite response. He responds:

She turns back to the sea.

–You arrived this morning.

The pattern of her thought is clear. She gestures around her, the space, she explains:

–This—this is S. Thala, all the way to the river.

He raises his head, looks in the direction of her gesture: he sees that from the far end of S. Thala, toward the south, the man who walks is returning, making his way through the seagulls, he is returning.

His pace is even.

Again the light: the light. Changes, then suddenly does not change anymore. Brightens, freezes, even, shining. The traveler says:

The man who walks has reached the point in his walk where he had stopped a moment earlier. He stops. He turns, he sees, he too looks, he waits, he looks again, he starts again, he comes.

His footsteps cannot be heard at all.

He arrives. He stops opposite the one who leans against the wall, the traveler. His eyes are blue, piercing, transparent. The emptiness in his gaze is absolute. He speaks with a firm voice, gesturing around him, everywhere. He says:

–The light has frozen.

They look all around them at the flood of light, shining. The traveler speaks first:

–It will shift again.

He approaches the traveler leaning against the wall. His eyes fix on him, blue, engulf him. The man gestures with his hand, points beyond the sea wall.

–You’re staying at the hotel over there?

–Yes. I arrived this morning.

She is silent, still watching the frozen light. He takes his eyes off the traveler, notices the stillness of the light.

–Something is bound to happen. This is impossible.

Silence: with the light, sound also has ceased, the sound of the sea.

His blue gaze comes back to focus upon the traveler:

–This isn’t the first time you have come to S. Thala.

The traveler tries to answer, several times he opens his mouth to respond.

He tries to answer.

They don’t expect a response.

Unable to respond, the traveler raises his hand and gestures at the space around him. Finally, he manages to come closer to an answer:

Her luminous voice rises up to him with dazzling clarity, she asks:

An uncontrollable shudder, from within, overwhelming, leaves him breathless. He whispers:

–All of it. Everything.

the movement of the light resumes, the sounds of the sea resume, the blue gaze of the man who walks recedes.

The man who walks gestures at everything, the sea, the beach, the blue town, the white capital, he says:

–Here, this is S. Thala, until the river.

His movement stops. Then his movement resumes, he gestures again, but more precisely, it seems, at all of it, the sea, the beach, the blue town, the white town, towns beyond, others still: all the same. He adds:

–And after the river, that’s S. Thala as well.

She gets up. She follows him. Her first steps are unsteady, very slow. Then they even out.

She walks. She follows him.

They skirt S. Thala, it seems; they do not enter its depths.

Interview with a Bookstore: Newtonville Books 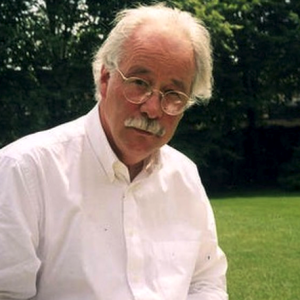 LitHub Daily: May 18, 2015 Andre Alexis catalogs all 21 animals that inspired his novel, Fifteen Dogs (not a listicle, no puppies). | Literary...
© LitHub
Back to top