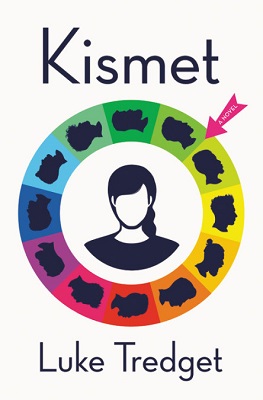 The following is from Luke Tredget's novel, Kismet. A cross between Black Mirror and Bridget Jones, the novel follows Anna, who joins the popular dating app Kismet, which assigns compatibility scores to potential matches. Just shy of turning 30, Anna has to decide whether to "settle" or pursue a life of passion and adventure. Luke Tredget lives in London and works in international development. His writing has been published in The Guardian.

The bus to Kilburn is a long time coming, and while waiting Anna looks back and forth between two versions of the Edgware Road, the real and the digital. The real one, all around her, is busy shifting into its evening routine. Dozens of people are gathering around her at the bus stop, pedestrians are streaming along the pavement and clotting at the zebra crossing, cars and taxis and lorries are blocked in both directions on the road, and beyond them the Odeon is filling up with couples queuing for tickets and popcorn. Anna’s attention focuses on two couples in particular, framed by the main window. One couple are tanned and chatty and their height is perfectly proportioned for the man’s arm to loop around the woman’s shoulder—she imagines the number 75 flashing above their heads. The couple behind them are of equal height and don’t seem to be communicating at all—it appears that the man might even be wearing headphones—and she pictures a 64, before a truck lurches forwards and blocks her view.

In contrast to this raucous activity, the map on her phone is entirely empty, showing nothing but the red dot pinpointing her location and the grey and beige outlines of surrounding buildings. This is Anna’s first day on Kismet, and the only match she has made was this morning in Soho Square, where she took her phone after receiving the text to say her profile was ready. The small park was deserted, but after a few minutes she saw a dark-haired man in a long coat walking around the perimeter of the square, and although she lost sight of him behind a hedge, he reappeared a moment later as a blue dot on her phone. Her excitement lasted only the time it took to press this dot with her thumb, which sadly yielded the number 54—not enough to approach someone in a bar, let alone chase them down in the street. Since then she has checked during her lunch break and while popping to the pharmacy and as she sat at her desk, but each time there was nothing, just as there is now, during the mayhem of rush hour. She wonders if something is amiss with her profile, or if she would be getting hits if she were waiting for a bus headed to east London, and then this thought is wiped by something surprising: she can hear singing.

‘Happy birthday to you.’

A young white man in a fleece and jogging bottoms is standing in front of her, with one foot off the kerb and one hand hanging onto the bus signpost. He sings at full volume, the familiar words wrapped around an altogether different, perhaps improvised melody.

‘Happy birthday,’ he continues, scanning his wild eyes around the bus stop, as if challenging the assorted commuters to meet his glare. ‘To yoouuu!’

Everyone surrounding Anna tuts and shakes their head and turns away, but she is transfixed, sensing something staged or unusual about this performance; there is something familiar about the man’s long, sad-looking face, as if maybe he is a minor celebrity, or just a friend of a friend.

‘Happy birthday, dear. . .’ His eyes fix on Anna at this point, and for a moment she thinks he is about to sing her name. But instead he says nothing, just stares at her helplessly, as if desperate for someone to remind him of his line, before ploughing on regardless.

Silence. His eyes sweep along the bus stop once more, as if he has proved his point and shamed them into silence, and then he walks away. Anna watches him strut off towards Marble Arch, pulling a small suitcase behind him, and eventually she is jolted by the realisation of who he looks like: her dad. Not the middle-aged version, but how he looked as a teenager or young man, in those photos of him with his siblings, in his first car, at graduation, a handsome and hopeful twenty-something. The similarity is uncanny, and she watches after the singer until he is completely lost in the weave of other pedestrians, and almost doesn’t notice that the bus to Kilburn has arrived and is waiting with its doors open.

“One couple are tanned and chatty and their height is perfectly proportioned for the man’s arm to loop around the woman’s shoulder—she imagines the number 75 flashing above their heads.”

Anna takes her favourite seat at the front of the top deck, and a moment after the bus chugs away she opens her contacts and calls Zahra, who answers immediately.

‘How are you?’ says Anna, inserting her headphones. Zahra says she’s fine, that she just got home, and when she asks the same question Anna jumps straight to it. ‘Something weird just happened. I was at the bus stop and this guy came and started singing at me.’

‘At you?’ says Zahra, her voice distant and echoing.

‘Well, more like at the whole bus stop. But he definitely focused on me.’

‘Was he drunk?’ says Zahra, her voice louder now.

Anna says the birthday song, and Zahra laughs and says that she doesn’t understand what was so weird.

‘It was like he was singing it to me.’

‘Right. So you think this guy knows when your birthday is, and decided to sing it two weeks early?’

‘It’s in ten days, actually. But the thing is, he kind of looked like my dad.’

‘Much weirder than him.’

There is a pause as Anna reflects on this, and then she sighs and says that it figures, as she certainly feels weird. As the bus passes beneath the Marylebone Flyover and onto the scruffy, low-slung end of the Edgware Road, Anna lists potential reasons for feeling strange: that she didn’t sleep well last night, that she had too much coffee to make up for the lack of sleep, that she still doesn’t know what she’s going to do for her birthday, and that she’s failing at work. She doesn’t add that joining Kismet has also jazzed her mood, but she does minimise Zahra’s face to a thumbnail on her screen and opens the map again.

‘Everyone feels like that on a Monday,’ says Zahra.

‘Of course. Everyone starts the week thinking they’re in the wrong job.’

‘I see,’ says Anna. ‘I didn’t know that.’ There is another pause as the bus passes a billboard for the new Kismet Love Test, which provides a one-off retrospective score for couples who met in the traditional way. Anna considers asking if most people wonder if they are in the wrong life as well as the wrong job, but she doesn’t want to go down that route, and instead asks Zahra why her voice keeps fading from loud to quiet.

‘You’re on speakerphone; I’m walking between the living room and kitchen. Sometimes I get home and just pace. The floorboards feel so nice underfoot!’

‘Nice? For six months’ work they should feel transcendental underfoot. Tantric, even.’

Zahra says it was worth every minute, and that they’re so pleased with the results that they’re thinking of knocking the two bedrooms together as well. While Zahra talks the bus stops and shuts down altogether beside the covered market, so the driver can swap with another man waiting on the street. A couple carrying large Argos bags walk past and, since Anna imagines everything and everyone in Kilburn being deficient in some way, she pictures a low number flashing above their heads, a 57. Then she looks at her phone and is surprised to see a blue dot so close to her red one they are almost touching. She taps the screen and the number 66 appears.

‘Fuck me,’ she says. She looks for him along the top deck of the bus, then presses her forehead to the side window. Dozens of people are walking along the pavement, but the dot on her map is static, and a little further along the road.

‘I need your advice,’ says Anna, angling for a view from the front window instead. ‘I joined Kismet.’

There is a cold silence from Zahra’s end of the line. A bus parked ahead pulls away, revealing a shelter where a dozen or so people are gathered.

“Anna considers asking if most people wonder if they are in the wrong life as well as the wrong job, but she doesn’t want to go down that route”

Zahra sighs, then repeats the number aloud a few times.

‘Then you should stay.’

‘I’m staying,’ says Anna, as the engine rumbles to life.

‘Thanks. I’ve forgotten the etiquette.’

‘I thought you were riding home with me?’

‘I never said that. And Keir’s just got in.’

‘But we need to discuss my birthday. I’ve found proof, you know.’

‘I’m thinking we can hire a boat?’

Her phone emits a harsh beep, the sound of a wrong answer, and the small picture of Zahra’s face disappears from her screen. The bus edges away from the kerb and Anna stares out the window, trying to get a clear look at the 66, but the light is poor and the shelter crowded—the people appear like letters printed over each other on the page. The bus accelerates, and the blue dot drifts away from her red dot, until it reaches the edge of her brightly lit circle, the fixed extent of Kismet’s reach, and vanishes into the shaded area beyond.

Anna turns around in her seat. Since she’s almost home she decides to log out of Kismet altogether, but before doing so she pinches at the screen, making her lit-up circle shrink in proportion to the washed-out and darkened streets around it. She pinches again and is surprised that the map zooms out to show an entire view of London, her fifty-metre circle now smaller than a pinprick. She pinches again and sees the UK within Europe, then Europe surrounded by Africa and the Atlantic and Asia, and finally the round Earth floating in black space. Anna smiles. It seems ridiculous to have designed such a feature, but she thinks about the amount of money and time it must have cost, and has a sudden yearning to know more about the Kismet programmer who decided, perhaps on a romantic whim, to spend their time making it this way.

From Kismet. Used with permission of Little, Brown, and Company. Copyright © 2018 by Luke Tredget.

Fiction Reminds Us That We're All In This Together

When Your Imposter Syndrome is Out of Control 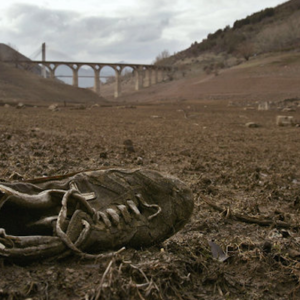 Fiction Reminds Us That We're All In This Together I suspect most people want their families and friends healthy, well fed, kind, and well educated, living in clean homes,...
© LitHub
Back to top