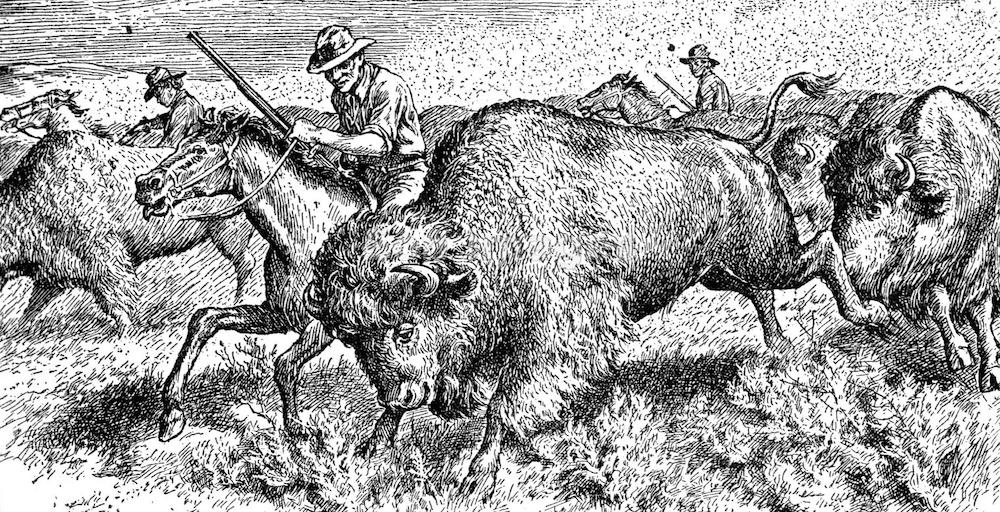 “Kill Every Buffalo You Can!” On the Cruelties of Colonial Power

By Rupa Marya and Raj Patel

Prior to colonialism, Europeans ascribed differences in the color of people’s skin to the climates in which their communities lived. Under colonialism, those geographic and climatological explanations morphed into ones shaped by shifting relationships to religion, state, and property. Recall that Columbus set foot on the Western Hemisphere just as Jews were being expelled from Iberia. As Cedric Robinson, and Aimé Césaire before him, have observed, the process of colonization overseas was articulated with a project of persecution aimed at Europe’s “others,” be they Jews or Romani communities or other migrants.

Debates about how biology might account for differences among peoples were particularly lively in the 18th century. The botanist Carl Linnaeus, in his 1758 edition of Systema Naturae, had subcategories of Homo sapiens with annotations about physiology and character. According to that foundational text for modern biology, Homo sapiens europaeus was, among other things, orderly and governable. Americans, Asians, and Africans had their own character traits: Homo sapiens americanus was regulated by customs, Homo sapiens asiaticus by opinion, and Homo sapiens afer by caprice. In a residual category, the Calibans of different sorts were grouped together as Homo sapiens monstrosus.

The Linnaean system classified life-forms into hierarchies of kingdoms, classes, and orders—a rather direct transposition from the language of colonial domination. Linnaeus’s taxonomy of human beings provided a scientific reasoning for the destruction of Indigenous medicine, knowledge, and ecosystems. Indigenous people were inferior, and it was the manifest scientific destiny of the new US state to eradicate them and to replace them with principles of government, knowledge, and order that were in closer harmony with the racial European science.

In the war on the Indigenous people of the Great Plains, the United States explicitly targeted the buffalo, their spiritual cornerstone and staple of food, medicine, shelter, and clothing. Toward the end of the 19th century, the US military sponsored the killing of millions of buffalo, inflicting starvation and dependency on the tribes. While it was never officially announced as the army’s policy, the Montana land baron Granville Stuart noted in his journal in 1879 that “slaughtering the buffaloes is a government measure to subjugate the Indians.” Colonel Richard Irving Dodge summed up the spirit of the massacre: “Kill every buffalo you can! Every buffalo dead is an Indian gone.” Before 1800, an estimated 30 to 60 million buffalo ranged the Great Plains. By 1900, only a few hundred remained, the survivors of the most violent genocide of any mammal ever documented. With the buffalo gone, Plains Indians’ bodies suffered trauma, cultural erasure, and starvation. Depression, diabetes, and drug dependency became endemic—all diseases characterized by chronic inflammation.

Toward the end of the 19th century, the US military sponsored the killing of millions of buffalo, inflicting starvation and dependency on the tribes.

Sundering people from their sources of food and medicine, from one another, and from their lands are preconditions for poor health for many Indigenous people in the United States. As the Indigenous scholar Nick Estes explains, “What was once a subsistence economy based on wild harvesting and small-scale agriculture was transformed almost overnight into dependency on USDA commodities. White flour, milk, white sugar, and canned foods replaced formerly protein- and nutrient-rich diets. Diabetes rates skyrocketed, and its spread can be contact-traced to a single public works project.”

On Pine Ridge Reservation today, the rate of diabetes remains 800 percent higher than the national average. Food insecurity is rampant—40 percent of families report having no access to healthy food. The long-term impact of these colonial strategies, destroying the knowledge in which food was medicine, rendering access to medicine impossible through extinction and displacement, has been to ascribe a rigid limit to Indigenous land and life.

Replacing Indigenous medicine required investment. In the 19th century, schools of tropical medicine boomed, paid for by colonial merchants (Liverpool) or governmental colonial offices (London) so that white men might survive in the tropics. This branch of medicine, geared toward the frontier of capitalism, was expressly intended to further colonial domination. As one journalist put it in 1911, “Australia is a big blank map, and the whole [white] people is constantly sitting over it like a committee, trying to work out the best way to fill it in.” The historian Warwick Anderson notes that through the application of laboratory techniques, “medicine was not just a means of knowing a territory, it offered in this case an opportunity to reshape it.”

Medicine reshaped the colonial world both at home and abroad.

Remember Charles Darwin and his impact on modern medicine? The integration of medicine and racial biology crystallized in the work of Francis Galton, Darwin’s cousin. His book Hereditary Genius, published in 1869 by Macmillan, combined theories of inheritance, reproduction, and racial hierarchy. Galton marshaled his knowledge of statistics to claim, for instance, that if fathers were of “literary stock,” then their sons were likely to be similarly talented.

Galton codified a definition of race that would come to have wide legal significance. The logic of hypodescent—in which one drop of blood from an ancestor of a minority race would permanently affix that category to all their descendants—found a scientific and medical home in his work. Hereditary Genius accentuated the positive consequences of eugenics (a term he derived from Greek to mean “of good stock”). If those of good stock, whether literary or political or artistic, were to reproduce abundantly, the world would be populated with the best kind of people—and science would be able to provide direction.

Darwin enthusiastically supported his cousin’s thoughts on the improvement of the human race. In his 1871 Descent of Man, he offered that “at some future period, not very distant as measured by centuries, the civilized races of man will almost certainly exterminate and replace throughout the world the savage races.” Galton himself explored the hierarchy of races, offering the usual assessment of the inferiority of Black to white but also a nuanced ranking of the relative merits of “lowland Scotch, North Country English and the Englishman of the Midland,” people separated by a distance of less than 300 kilometers (200 miles). By 1877 he was able to refine his prejudices sufficiently to present them to a meeting of the British Association for the Advancement of Science, in a discussion about the “hereditary moral weaknesses” of some races. The popularity of such views spread not only through British colonies but globally, and so did ideas about what governments might do to manage “racial enfeeblement,” from Japan to the United States to Brazil.

Eugenic science guaranteed the idea that some “bloodlines” were inferior to others. The policies that it spawned were patterned on public health ideas about infection control, with its vocabulary of protection, defense, and security. It styled itself as a harmonious and ecologically well-considered approach to the improvement of humanity: the print in the illustration—showing a 1921 New York exhibition on eugenics—presented the program as a mighty tree with roots of medicine, history, biology, and economics, among others: one science to unite them all. Visual metaphors like this were deployed to make the artifice of racial science common sense. The logic of white supremacy reproduced itself just as colonialism did, from these origins within the academy, state, and economy, normalized through consent and coercion, into the norms of the modern hospital.

Rooted in the soil of British colonialism, eugenics blossomed under the Nazis, reaching the nadir of the concentration camps and Joseph Mengele’s medical experiments. In the United States, from 1932 to 1972, the Tuskegee Syphilis Experiment, run by researchers from the Public Health Service, offered to treat Black men in Macon County, Alabama, for “bad blood,” a term for syphilis. No treatment was actually administered, despite penicillin’s indication and wide availability starting in the 1950s. By 1972, when the story broke, between 28 and 100 of the men in the study had died from lack of treatment, wives had been infected, and children had been born with congenital syphilis. These are the politics of racial hygiene made flesh. 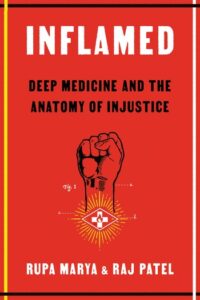 Dr. Rupa Marya is a physician, an activist, a mother, and a composer. She is an associate professor of medicine at the University of California, San Francisco, where she practices and teaches internal medicine. She is a cofounder of the Do No Harm Coalition, a collective of health workers committed to addressing disease through structural change. At the invitation of Lakhóta health leaders, she is helping to set up the Mni Wiconi Clinic and Farm at Standing Rock to decolonize medicine and food. She is a cofounder of the Deep Medicine Circle, an organization committed to healing the wounds of colonialism through food, medicine, story, and learning. Working with her husband, the agroecological farmer Benjamin Fahrer, and the Association of Ramaytush Ohlone, she is a part of the Farming Is Medicine project, where farmers are recast as ecological stewards of rematriated land and food is liberated from the market economy. She has toured twenty-nine countries with her band, Rupa and the April Fishes, whose music was described by the legend Gil Scott-Heron as “Liberation Music.”
Raj Patel is a research professor at the University of Texas at Austin’s Lyndon B. Johnson School of Public Affairs, a professor in the university’s department of nutrition, and a research associate at Rhodes University, South Africa. He is the author of Stuffed and Starved and the New York Times bestselling The Value of Nothing, and the coauthor of A History of the World in Seven Cheap Things. A James Beard Foundation Leadership Award winner, he is the codirector of a groundbreaking documentary on climate change and the global food system, The Ants and the Grasshopper. He serves on the International Panel of Experts on Sustainable Food Systems and has advised governments worldwide on the causes of and solutions to crises of sustainability.

Who Was Mary Shelley, Daughter? 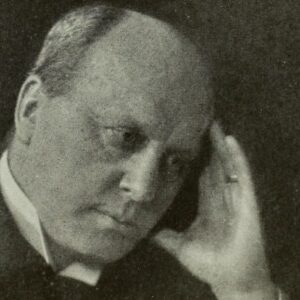