How did the Nazis come to power in 1933? German historian Katja Hoyer joins Al Murray and James Holland to talk about the fragmented German national identity and the how it still affects the country today.

Al Murray: A fashionable political phrase of the last few years has been the idea of the left behind; there are sectors of the population that get left behind. They tend to end up voting Trump, those people who imagine themselves left behind in America and who were attracted to him. Is the agricultural sector the left behind in Germany, and is that partly who the NSDAP are tilting at, that Hitler’s considering them? Because after all, if we’re going to put democracy back into the picture here, Hitler, after all, plays the role of a Democrat, until he decides he doesn’t have to anymore. So he’s courting electorates. He’s tailoring policy and offers to the population. Who’s he playing to? How is he going about that? Is he directly appealing to agriculture? Because we think of industry and the Nazi Party being in bed together, don’t we? What’s he doing for agriculture or women or small businesses and all that sort of thing?

Katja Hoyer: Well, I think why it works is that he appeals to all of these people, and they are the only political party that does that. Every other party targets usually one specific economic group. And when Hitler decided to rename the party from the German Worker’s Party—right at the beginning, really, straight after he takes over leadership of it—into the National Socialist German Workers Party, he’s got National Socialist Workers in there, and all of a sudden is covering an entire political spectrum that other political parties just didn’t think of.

And they are the only political party that realizes that since 1918, women have got the vote, and they are 50 percent of the electorate. And actually, when you look at the figures initially, they don’t turn up to elections on the same scale that men do, largely because Germany is still a traditional society where a lot of women themselves don’t think they have any role to play on the political field, or they vote whatever their husbands voted for, and they just go in and make their tick in the same box. And the Nazis specifically start bringing out election posters targeting that group, mainly again with very conservative messaging, but that works because people, women in particular, are worried about income, about stability, about economic safety for their families. And they deliberately go out and support that.

A lot of women also feel quite, I wouldn’t say threatened, but certainly this idea of the modern woman being something that appeals to all women in Germany in the 1920s is just not the case. It’s a very small fraction of the urban middle class milieu, effectively. They like that. But there are loads of women who just feel outright threatened by that and their roles as mothers and housewives and traditional housekeeping capacity. You’re now being told that it would be much better if you put on a nice dress and hang out in a bar, smoking and drinking. And they neither want that, nor do they think it’s something that they should want. And so, the Nazis appealed to the conservative element within German women, of which there were many as well.

Laurie Frankel on the Way That Girls Superhero 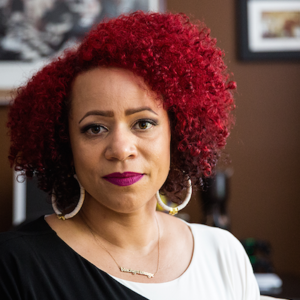 Nikole Hannah-Jones, creator of the 1619 Project and winner of the Pulitzer Prize and a MacArthur fellowship, has been hired...
© LitHub
Back to top