Katherine Mansfield on the Thrilling Joy of Creation

"When you paint apples do you feel that your breasts
and your knees become apples, too?"

One hundred years ago today, Katherine Mansfield wrote a letter to her friend, the painter Dorothy Brett. In it, Mansfield waxed poetic on the beautiful day (it’s a cardinal rule that every letter must begin with the weather) and wrote about how deeply and instantly she connected with the subjects of her art, and how much she loved writing (including how much she loved getting positive feedback). “It’s not a case of keeping the home fire burning for me. It’s a case of keeping the home fire down to a respectable blaze and little enough. If you don’t come and see me soon there’ll be nothing but a little heap of ash and two crossed pens upon it.”

If you haven’t read her work, I think this letter might convince you to give her a try, but what I really can’t get over is how effusive she is; how in love with the world, how happy to be able to reflect it in prose. Only two months after this letter was written, when she was just barely 30 (her birthday is October 14th, by the way), Mansfield was diagnosed with tuberculosis. It would kill her before she was 35. But for now, she will write about ducks and swear she is a duck, and look at the shiny apples with such joy that she feels herself transforming. I have to admit, I feel a little bit transformed too.

It is a cold sharp day—I can see the sun flying in the sky like a faint far-away flag—My Japanese doll has gone into boots for the winter and the studio smells of quinces. I have to write all day with my feet in the fringe of the fire—and Oh Alas! it is sad to think that I shall be warm in front and cold behind from now until next June. It seems to me so extraordinarily right that you should be painting Still Lives just now. What can one do, faced with this wonderful tumble of round bright fruits, but gather them and play with them—and become them, as it were. When I pass the apple stalls I cannot help stopping and staring until I feel that I, myself, am changing into an apple, too—and that at any moment I may produce an apple, miraculously, out of my own being like the conjurer produces the egg. When you paint apples do you feel that your breasts and your knees become apples, too? Or do you think this is the greatest nonsense. I don’t. I am sure it is not. When I write about ducks I swear that I am a white duck with a round eye, floating in a pond fringed with yellow blobs and taking an occasional dart at the other duck with the round eye, which floats upside down beneath me. In fact this whole process of becoming the duck (what Lawrence would, perhaps, call this ‘consummation with the duck or the apple’) is so thrilling that I can hardly breathe, only to think about it. For although that is as far as most people can get, it is really only the ‘prelude’. There follows the moment when you are more duck, more apple or more Natasha than any of these objects could ever possibly be, and so you create them anew. Brett (switching off the instrument): ‘Katherine I beg of you to stop. You must tell us all about it at the Brotherhood Church one Sunday evening.’ K: Forgive me. But that is why I believe in technique, too (you asked me if I did.) I do, just because I don’t see how art is going to make that divine spring into the bounding outlines of things if it hasn’t passed through the process of trying to become these things before recreating them.

I have left your letter unanswered for more days than I could have wished. But don’t think it was just because I am so careless & faithless. No, really not. I enjoyed keeping silent with the letter just as one enjoys walking about in silence with another until a moment comes when one turns and puts out a hand and speaks.

I threw my darling to the wolves and they ate it and served me up so much praise in such a golden bowl that I couldn’t help feeling gratified. I did not think they would like it at all and I am still astounded that they do. What form is it? you ask. Ah. Brett, its so difficult to say. As far as I know its more or less my own invention. And how have I shaped it? This is about as much as I can say about it. You know, if the truth were known I have a perfect passion for the island where I was born. Oh, I out-Chili Chili any day! Well, in the early morning there I always remember feeling that this little island has dipped back into the dark blue sea during the night only to rise again at beam of day, all hung with bright spangles and glittering drops—(When you ran over the dewy grass you positively felt that your feet tasted salt.) I tried to catch that moment—with something of its sparkle and its flavour. And just as on those mornings white milky mists rise and uncover some beauty, then smother it again and then disclose it. I tried to lift that mist from my people and let them be seen and then to hide them again… Its so difficult to describe all this and it sounds perhaps overambitious and vain. But I don’t feel anything but intensely a longing to serve my subject as well as I can—But the unspeakable thrill of this art business. What is there to compare! And what more can one desire. It’s not a case of keeping the home fire burning for me. It’s a case of keeping the home fire down to a respectable blaze and little enough. If you don’t come and see me soon there’ll be nothing but a little heap of ash and two crossed pens upon it.

Are you coming to London soon—Let me know. Let us meet. Shall I see you float across my window upon a chariot of bright umbrellas?

Venus Laughing From the Skies. Isn’t it a beautiful title, when all is said and done—Goodbye goodbye goodbye. It is all too wonderful.

Ellen Ullman: We Have to Demystify Code 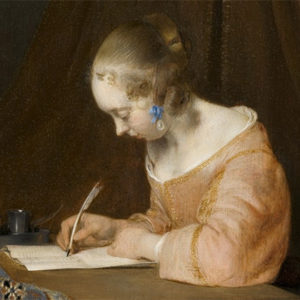 Literary friendships are the stuff of legend. The image of Samuel Taylor Coleridge and William Wordsworth tramping the Lakeland...
© LitHub
Back to top