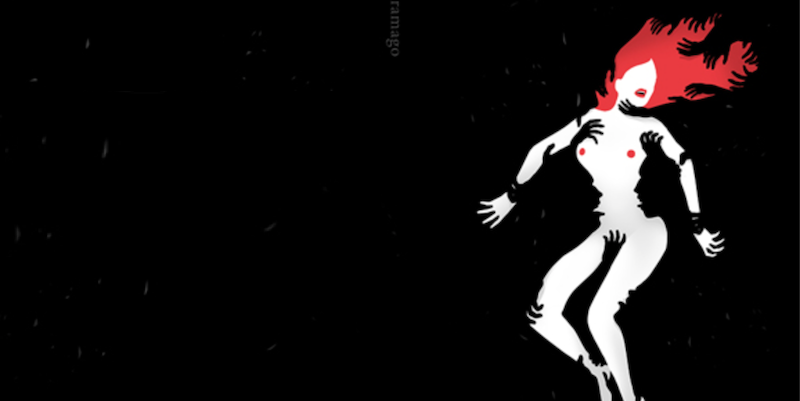 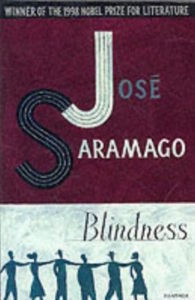 Perhaps only in a world of the blind will things be what they truly are.

“A few pages into José Saramago’s Blindness, I was reminded of Albert Camus’ essay on Franz Kafka. Camus points out that Kafka’s characters seem so bizarre precisely because they accept their unusual if not outlandish circumstances as being perfectly ordinary. For instance, in The Metamorphosis, when Gregor Samsa wakes up and finds that he is an enormous cockroach, he doesn’t say, ‘My God, look at me, look at these plates and brown things on my chest,’ but, in effect, ‘How the hell am I going to get to work?’ The trick of all of this, of course, is that when the author refuses to react to his characters’ circumstances, the reader does.

In fact, it is fitting that Camus and Kafka come to mind in considering this book, if only as a kind of speed rating. Surely, Saramago is in a league that requires comparison with such writers, on the basis not only of skill but subject matter, too.

Blindness is the account of an epidemic in which people lose their sight. A distinguishing aspect of the epidemic is the speed of its onset in individual cases. For instance, one of the first is a man driving his car who loses his sight while waiting at a traffic signal. This moment is much like Kafka’s Metamorphosis, since the driver who has been struck blind does not moan and scream or complain. What he says is, ‘Please, will someone take me home?’

The epidemic spreads through an unnamed city (with certain Portuguese highlights), and soon a quarantine camp is established in which the newly blind are confined. In particular, we follow the events that concern the first few cases: a blind taxi driver, a blind thief, an ophthalmologist and a young woman who is identified by the fact that she wears dark glasses.

The life of the camp quickly degenerates into a Hell on Earth where the blind are victimized first by the way they have been rounded up and shoved into what was a mental hospital, then by the fact that they are not fed regularly, and most appallingly by how they are reduced in their attempt to stay alive. The nadir occurs when thugs steal food meant for the inmates and then sell it to them. After taking the inmates’ possessions, the thugs extort the services of the camp’s women. 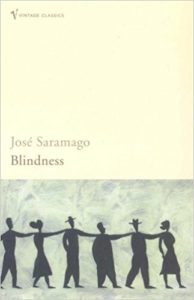 “It is a dark, appalling world, and by the way it is written, in the details that Saramago uses to such good effect, almost all the horrors of the 20th century are addressed: We are continually reminded of concentration camps, of the excesses of capitalism without the least restraint, of the miseries of bureaucratic aloofness, of militarism and, of course, the endless darkness of the human heart.

Ultimately this group of the blind, led by a woman who can still see, is able to escape into the city from which it came. The city has degenerated into a chaos of the sightless, where life is brutish and short. It is a world that is perfectly established by the details that Saramago invokes to suggest lives suddenly gone dark: People can no longer, for instance, find their shoes, or their houses. In a city of the blind, everyone is lost. There is never a helping hand. In fact, Saramago makes obvious what we all know to be true: that sight, moral and otherwise, is the basis of civilization.

It is the voice of Blindness that gives it its charm and that makes it possible to read of such horrors. By turns ironic, humorous and frank, the voice has a way of making one feel a certain empathy with the author, which is to say between author and reader there is a kind of wink of humor that is perfectly imbued with fury at the excesses of the current century. Blindness reminds me of Kafka roaring with laughter as he read his stories to his friends.

The voice and the details it uses refer not only to past excesses but to current ones, too. For instance, when the band of internees escapes from the camp to live in the city of the blind, Saramago writes, ‘We’re going back to being primitive hordes . . . with the difference that we are not a few thousand men and women in an immense, unspoiled nature, but thousands of millions in an uprooted, exhausted world.’ 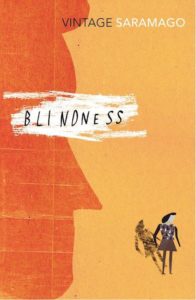 “In fact, though, because Blindness makes its antecedents so obvious, it begs to be compared with them, and in particular it asks to be compared with Camus’ The Plague. The critical difference, I think, is that Saramago depends on irony for his effects, on a tongue-in-cheek send-up of the military or bureaucrats or of any of the other legitimate targets of the 20th century. However, Camus’ effects come from a moral certainty and a sensual delight in the pleasures of being alive or from the belief that love matters and that dignity is critical, particularly so in the face of disaster. One does not like to make this comparison, because it seems to suggest what we have lost over the past 50 years, a loss that can be most clearly seen in the descent from the moral clarity of Camus to the ironic contempt of Saramago.

There is one other difficulty with Blindness. It is exceedingly hard to read. It is put together in large blocks of text in which dialogue is run together with the narrative. The prose does not have establishing shots, as they say in Hollywood. This lack, the staccato pace of the language, and dense blocks of text turn reading this book into a task.

Still, this is an important book, one that is unafraid to face all of the horrors of the century. Its impact, though ironic, still carries the force of an author whose sensibility is at once alive and significant.” 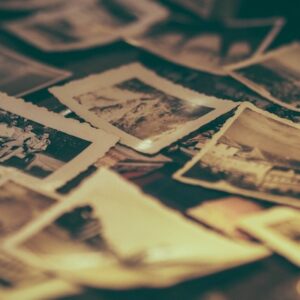 Once at a party, I was introduced as a writer. It felt kind of nice for a second. But then a stranger who had gone to my high...
© LitHub
Back to top
Loading Comments...