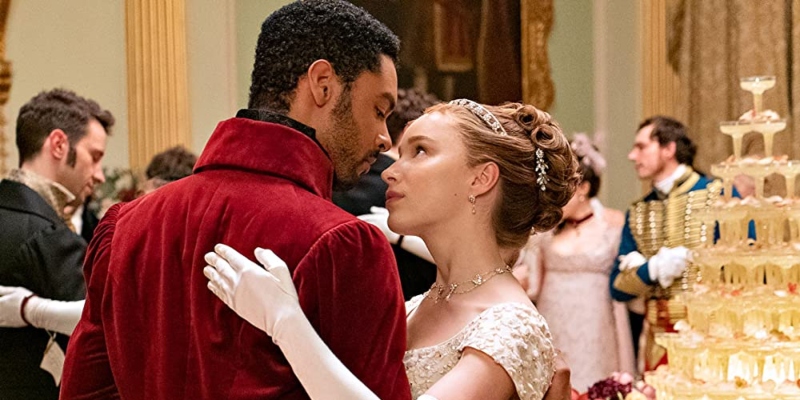 Just How Much is Jane Austen a Precursor to Bridgerton?

Robert Morrison on Race, Sex, and Violence in the Regency Era

The six published novels of Jane Austen all appeared during the Regency Era (1811-1820), the remarkable period in British history during which, following the descent of George III into madness, the country was ruled by his profligate eldest son George, Prince of Wales, first as Prince Regent, and then, at his father’s death, as George IV. Likewise, the first season of Bridgerton—which was watched in more than 80 million households and reached number one on Netflix in 76 countries—is set in 1813, as the narrator tells us right at the start. It is a deliberate nod to Austen, who in that same year published the most famous Regency romance of all: Pride and Prejudice.

The link to Austen might seem superficial, given the wide gap that soon opens up between the restrained, ironic world of her novels and the steamy sexuality of Bridgerton, which proved hugely popular with audiences in the first season, and which will again feature—perhaps even more prominently if some reports are to be believed—in the eagerly awaited second season, coming to Netflix later this month. Yet the worlds of Austen and Bridgerton are far closer than they might at first appear, both in terms of what they choose to ignore and in terms of what they choose to embrace, from a fascination with courtship and seduction to their shared desire to challenge contemporary conventions of gender and race.

It is a truth universally acknowledged, as many have pointed out, that Austen creates her poised and tightly constructed comedies of manners by focusing on a very small section of British society, and by overlooking the vast political and social upheavals of the Regency, including the Highland Clearances in Scotland, the Luddite riots in England, and the Napoleonic Wars in Europe. Bridgerton, too, concentrates on a tiny portion of the British population—royals and aristocrats rather than Austen’s landed gentry—and it also, like Austen, constructs a world of elegance and elaborately coded propriety by erasing or obscuring social evils such as rapacious colonial conquest abroad and grinding poverty for millions at home.

Besides fashioning a highly selective version of Regency life, Austen anticipates Bridgerton in her use of characters and events, derived in part from her favorite novels and plays; in turn, Bridgerton reimagines Austen in ways that thoroughly shape the show’s plot and appeal. In Austen as in Bridgerton, courtship is the preeminent interest and marriage the highest ambition, and there is tremendous pressure on young women to marry well, pressure that is continually complicated by their own preferences, the unwanted attentions of usually older men, and the involvement of parents and siblings scheming to secure them a prosperous match. Young Regency women had only a brief span of years to attract a partner before they were deemed too old and—like Anne Elliot in Persuasion—forced onto the shelf by younger rivals.

It was especially important for women to avoid the allures of a rake: typically a handsome, promiscuous man who might turn out to be a likeable and relatively harmless (or even redeemable) rogue, but who may just as easily prove to be a heartless debauchee interested only in the pleasures of the chase and the bedchamber. The two most charming and dangerous libertines in Austen are Sense and Sensibility’s John Willoughby and Pride and Prejudice’s George Wickham; their recklessness and duplicity threaten to destroy the reputations of the women they pursue, blighting their chances of success on the highly competitive marriage market and tainting other family members through association. When Mr. Collins, the fatuous clergyman in Pride and Prejudice, learns that the youngest of the five Bennet daughters, Lydia, has run off with Wickham, he sends Mr. Bennet a letter full of malicious delight: “This false step in one daughter will be injurious to the fortunes of all the others; for who … will connect themselves with such a family?”

In the first season of Bridgerton, Daphne Basset (Phoebe Dynevor), making her debut in the London social season, dines one evening next to her eldest brother Anthony’s old schoolfriend, Simon (Regé-Jean Page), Duke of Hastings. Daphne knows Simon’s reputation as a womanizer, and at one point turns to him and calmly delivers her assessment of his character: “You are a rake through and through.” In true Austenian style, however, the attraction between these two opposites builds and builds until, in episode four, Anthony (Jonathan Bailey) catches them kissing passionately in the shrubbery, and immediately insists that Simon marry Daphne, so serious is their breach of the strict Regency norms concerning female chastity. When Simon refuses, Anthony challenges him to a duel—a highly ritualized exchange between gentlemen that combines honor and violence—in order to protect the reputation of his sister and their family. Colonel Brandon behaves in the same way in Sense and Sensibility: John Willoughby seduces Brandon’s ward, Eliza Williams, and when Brandon learns of it, he and Willoughby duel.

Sex in Bridgerton—and the lack of it in Austen—is the major difference between them. But Austen knew much more about female erotic fantasy than is commonly assumed, as she makes particularly plain in Pride and Prejudice, though the subtlety and brevity of her approach is a far cry from the frankness and frequency of sexual intimacy in Bridgerton. Elizabeth, the second eldest of the Bennet daughters, is a healthy, energetic young woman who takes great delight in physical activity such as walking, running, “jumping over stiles,” and “springing over puddles,” and who also glows, burns, and blushes, Regency code words to suggest but not explicitly name sexual desire. After the haughty, handsome Mr. Darcy snubs her at their first unfortunate meeting, we might expect Elizabeth to abandon any idea of him, but he stays in her mind for an entire month. She is also plainly infatuated with Wickham: “Elizabeth went away with her head full of him. She could think of nothing but of Mr. Wickham.”

Perhaps the most remarkable aspect of Bridgerton is its multiracial approach to casting, which produces a deeply seductive piece of escapism combining wealth, beauty, and racial harmony, but which also suggests new ways to challenge Eurocentric stories and the markets and resources associated with them. Austen deals with the issue of race most explicitly in Sanditon—the novel she left unfinished at her death—when she introduces Miss Lambe, a young woman of large fortune from the West Indies who is “half mulatto,” in delicate health, and “beyond comparison the most important and precious” of the three young ladies under the care of Mrs. Griffiths. Lady Denham promptly considers Miss Lambe a potential wife for her nephew, the relatively impoverished Sir Edward Denham.

Miss Lambe attracts attention because of her money—an inevitability in an Austen novel—but not because of her race, which Austen treats as unremarkable, as indeed do the other characters in the novel—none of whom express shock, alarm, or anger when Miss Lambe makes her entrance, and this during the Regency, when slavery was legal across the British empire, including in the West Indies, and staunchly defended by many elites. In normalizing a mixed-race person’s place in British society, and in granting her respect and social status, Austen critiques racial bigotry. Bridgerton takes a similar approach, casting a black woman as Queen Charlotte and a black man as the Duke of Hasting, decisions which ignore historical fact but which have also generated passionate discussions about racial stereotypes, colorism, social inequality, and multiracial relationships.

Austen died in 1817, more than two centuries before Bridgerton debuted, and her reputation persists as a domestic, demure authoress interested only in three or four families in a country village. Yet her novels contain in outline some of the key preoccupations of Bridgerton, from its concentration on the upper echelons of Regency society to its explorations of romantic love, rakery, ritualized violence, race, and female sexuality. Austen, as Virginia Woolf knew, is “a mistress of much deeper emotion than appears upon the surface.” 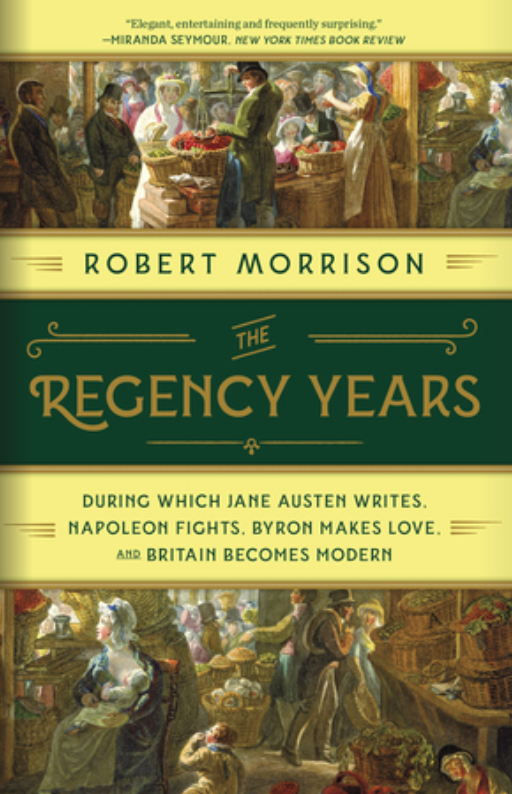 Robert Morrison is British Academy Global Professor at Bath Spa University and Queen’s National Scholar at Queen’s University, Kingston, Ontario. He is the author of The English Opium Eater: A Biography of Thomas De Quincey, a finalist for the James Tait Black Memorial Prize, and The Regency Years, named by The Economist as one of its 2019 Books of the Year. He lives in Bath.

How Buffy the Vampire Slayer Mishandled Characters of Color 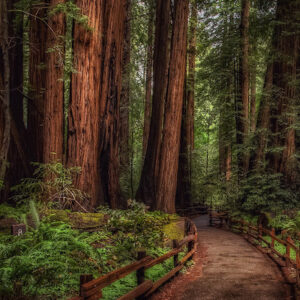 Translated by Emma Ramadan In our opinion, there is a clear connection between the treatment of the bodies of women, the enslaved,...
© LitHub
Back to top
Loading Comments...