In this episode, writers Sandra Lim and Brian Hall join host Catherine Nichols to discuss Jean Rhys’s 1939 novel, Good Morning, Midnight. The novel is about a grieving, impoverished woman wandering through Paris, intermittently hopeful and despairing, The conversation addresses the novel’s artistic and political context and biographical links to Rhys’s life, as well as literary depictions of poverty in the 19th and 20th centuries, particularly the Great Depression.

Sandra Lim: When I have friends who read it, they’re like, “But it’s so depressing.” But I feel like there’s a kind of detachment; I can go back to it and I don’t feel pulled into depression in a psychological way. I think because she creates this sense of detachment, which is part of her problem, too. But she’s so funny. The hat scenes. Sometimes I’m like, oh my god, she’s actually very, very funny. I don’t know how she does it. This is so amazing. The sensibility is so particular.

Brian Hall: There’s a quote, somebody writing about King Lear years and years ago, and it always stuck in my head. I have to paraphrase because I don’t have a good verbatim memory, but it was basically, “This is a play about emptiness, nihilism, despair, lack of god, such a horrible vision. And yet one leaves the theater elated at the artistic mastery of its creation.” That this may be an empty world, but there is a person in it who could write King Lear.

I never get depressed by the actual depressing subject matter of books, as long as I love what the writer’s doing with it. I come out instead feeling elated. I only get depressed when I’m reading a book that I think is done in a clumsy, boring, unoriginal way; it has nothing to excite me. That’s what gets me down.

She’s definitely funny. But even if she weren’t funny, her eye is so good. Well, I guess you’re always funny when your eye is really good because you’re looking at people sharply. And any time you look at humans in a sharp way, there’s a comic element to it.

Sandra Lim is the author of three poetry collections: The Curious Thing (W.W. Norton, 2021), The Wilderness (W.W. Norton, 2014), and Loveliest Grotesque (Kore Press, 2006). The Wilderness was the winner of the 2013 Barnard Women Poets Prize and the Levis Reading Prize. Her poems have appeared in numerous literary journals and magazines, including The New York Review of Books, Poetry Magazine, The Yale Review, Boston Review, The New Republic, and Gulf Coast.

Diving Into the “Uncanny Despair” of the Cruise Ship Narrative 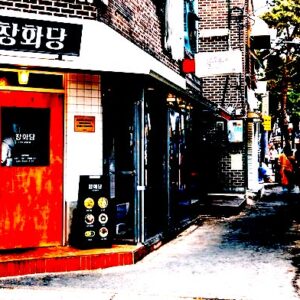 When it comes to fiction, I can’t write about a place until I’ve left it. Over the years, I’ve found that I require...
© LitHub
Back to top