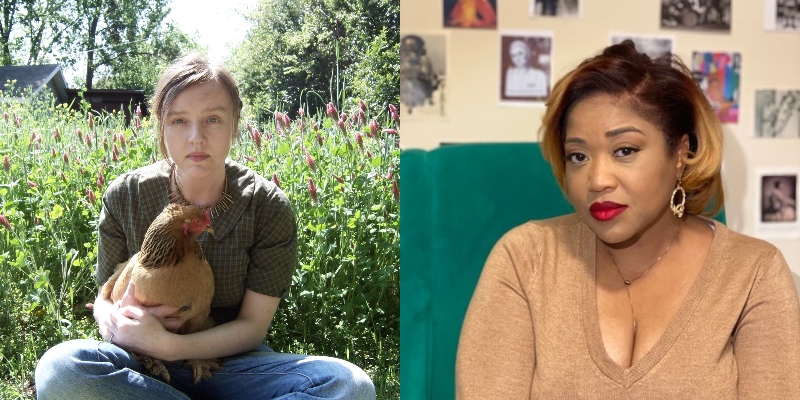 Julia Elliott and DaMaris B. Hill on Writing Rural America

Novelist Julia Elliott and poet and writer DaMaris B. Hill join hosts Whitney Terrell and V.V. Ganeshananthan to consider the writing and face of rural America—particularly as it might look 30 years from now. First, Elliott talks about growing up as an outsider in her own South Carolina hometown, and reads from her debut novel The New and Improved Romie Flutch. Then, Hill, who was born in West Virginia, speaks to the diversity of rural spaces and reads a historical poem, “Beloved Weirdo,” from her forthcoming poetry collection Breath Better Spent: Living Black Girlhood. Hill also speaks about judging the Maya Angelou Book Award.

To hear the full episode, subscribe through iTunes, Google Play, Stitcher, Spotify, or your favorite podcast app (include the forward slashes when searching). You can also listen by streaming from the player below. Check out video excerpts from our interviews at LitHub’s Virtual Book Channel, Fiction/Non/Fiction’s YouTube Channel, and our website: https://www.fnfpodcast.net/

This podcast is produced by Hayden Baker and Anne Kniggendorf.

A Bound Woman Is a Dangerous Thing: The Incarceration of African American Women from Harriet Tubman to Sandra Bland

The Fluid Boundaries of Suffrage and Jim Crow: Staking Claims in the American Heartland

The New and Improved Romie Futch

*
Excerpt from a conversation
with Julia Elliott and DaMaris B. Hill:

Whitney Terrell: How did growing up in South Carolina influence your fiction?

Julia Elliott:  Well, I would like to say that in my first collection, definitely over half of the stories take place in South Carolina. I’m definitely influenced by the culture, I feel that I will always have what I call an inner hick inside of me, that I will never get rid of. And I’m very influenced by the ecology of the South, the oppressively humid, but rich low country weather for example, the shrieking insects, the cicadas, Spanish moss, the swampy terrain, I even joked that maybe like the swamps are full of these weird endemic brain parasites, and I’ve been infected with one and it’s given me what my father used to call a hyperbolic condition.

But at the same time, when I was growing up, I was always an outsider and a weirdo, like I never belonged in any of these tiny towns. And my dad was kind of a weirdo himself. He has like half of a PhD basically and then he became a principal. He wanted to be an academic, but he had four kids so we had to get a job, so he became a principal, and he encouraged me to read Dostoevsky in middle school. I don’t know if that was good for me or not. But I always kind of approached life from an outsider’s perspective. And I was also kind of strange looking. I was like really pale and freckly and red-haired, and all the southern people really emphasize getting a tan and spending your entire day beside bodies of water like tanning yourself with weird concoctions like Coca-Cola and baby oil. And so if I did try to do that, but I would be hellishy burned, and so I didn’t fit in with that side either. So I guess my outsider status, as an observer, definitely influences the way that I look at these communities through my fiction.

V.V. Ganeshananthan: So interesting that you have a Southern aesthetic, but it’s your own and not perhaps the predominant one. And so your work also blends genres and subverts—in really interesting ways—reader expectations of what I think rural fiction is and can be. The New York Times review of the New and Improved Romie Futch calls you “Flannery O’Connor for the data mining age.” Such a great phrase. And another reviewer describes your novel as “Flowers for Algernon as imagined by George Saunders.” And there is no doubt that the narrator of the novel sounds postmodern, despite his—and heavy air quotes here—redneck qualities. What inspired you to write in the voice of a postmodernist?

JE: Well, I’ve always kind of struggled between my academic self and what I call my inner hick. So I was born in a small town, I lived in small towns, but I also went through an MFA program and a Ph. D. program. I am a professor and an academic who uses all the critical theory jargon, and I use it in my classes. And so I wonder, how could you have a rural person that was somehow equipped with this analytical apparati? How would they see the world if their mind was suddenly expanded? And then I became obsessed with brain downloads, because maybe around say, 2008, a lot of… I was actually teaching a dystopian lit class at the University of South Carolina. And every day I would bring my students three factoids, and one would be fake, and two would be real. And I would be searching for futuristic-sounding tidbits that were real. And there was a lot of stuff out there about brain downloads. And so it made me think: what would happen if one of these people that I grew up with suddenly was equipped with like the equivalent of a humanities Ph.D within a month, like how would their view toward the world change? So I feel like in some way, Romie Flutch helped me sort of meld these conflicting aspects of my myself, because I am still a small town person who was terrified my first few days of graduate school at Penn State University, where I got my MFA, I remember going to a critical theory or literary theory class and just thinking that they were speaking gibberish, and I would never be able to understand what they were even saying. But then eventually, I get sort of initiated into the world of academia. And I feel alienated from both worlds, but somehow Romie Futch gave me this language with which I could access kind of both from these weird vantage points. And I feel like that hybrid voice enabled me to grapple with what you might call post-modern Southern existence.

V.V. Ganeshananthan: Having lived in such a diversity of places, how do you think about your connection to the countryside as a writer or as a citizen?

DaMaris B. Hill: It has been much of a transition. Even though I was born in Charleston, West Virginia, I spent a lot of my time oceanside and in or near the Atlantic. Before moving to Kansas, since moving to the East Coast, I’d never lived more than about five miles from the Atlantic Ocean. So to say that, is to say that it was a transition. But since living in Kentucky, I have really learned to embrace and love the mountain geography as being just as welcoming as the ocean. I recognize the diversity of waves in the diversity of the trees, right? And I’ve been joking with my friends, like calling myself the sea dragon that climbs mountains, because that’s how I see myself inhabiting this space now, like an oceanic-oriented person now embracing the landscape, geography, and cultures of a more interior space, a more country space.

WT: I think this land along coastlines can be rural. It depends on where you are, particularly in the Carolinas.

DH: Absolutely. In the Carolinas, and most people don’t know that the eastern shore of Maryland is very rural. In some places along the beach they even have horses. Like it’s that rural where wild horses exist along the Atlantic Ocean. So I have experience with rural spaces, my family being from North Carolina.

DH: I imagine Frank X. Walker, Crystal Wilkinson. I imagine some people coming out of northern New York. I imagine, of course, people in Missouri, and Kansas like Whit. And the Latino Writers Collective, which is in Kansas City. I think about Colorado, I think about Oklahoma. Somehow a lot of the writers that are writing in the rural spaces are usually classified as Southern writers, or Western writers, or some larger geographic notion that fits in with the regionalism that may or may not express the diversity of the actual land space. And so, as we were talking about before, you can drive in half an hour outside of L.A. and find yourself in a rural space. I mean, Palm Springs, if it wasn’t for our recollections of Coachella and fancy, queer parties might be a very rustic and rural space.

VVG: I’m so glad you are talking about the way that we imagine the South as rural and the north and other regions of the country are entirely urban. And it’s so revealing to talk about hidden urban and hidden rural spaces. For a long time, the popular conception of rural life mirrored that, and Richard Wright wrote about his youth in Mississippi and Arkansas and Tennessee in Black Boy, and Langston Hughes grew up in Joplin, Missouri, and Lawrence, Kansas, and frequently wrote about the Midwest, and Alice Walker wrote about growing up in rural Georgia. And yet, if you listen to someone talk about rural voters, heavy air quotes, rural voters, in the 2016, or 2020, or 2022 election, you would think that every single person who lived outside of the city limits was white. So how did this change?

DH: I am unsure how it changed. But I want to begin by saying, in my opinion, which is based on history, America has never been a white nation. It’s always the propaganda of white, right? It’s never white. So I think if we did not, as a country, have the insistent performance of white identity, that our country would probably look a lot like how Montreal looks. And some of the global features that are part of our country’s city life and interior, right, because the most affordable places to live in the U.S. happened to be spaces that may be rural or interior. A closer examination would show that there’s a wide array of different people, cultures, and ethnicities in these places that are marketed as white, right? Or told to be all white. I have yet to know where those places are. I think some people claim white on the census, but I want to say three things. One, the most rustic place I’ve ever been to in my life was upstate New York. And I had to leave because it was so rustic and rural that I couldn’t take it. I had to leave early, and it was a residency—I’m so sorry. But two: one of the most diverse places that you can be is a place like Kansas, where there are many populations of Latino and Indigenous people, and African American people, and people from different global cultures that have been there for generations. But the third thing that I want to say is that it is impossible for you to be in the United States for more than two generations and not be a little biologically diverse. So even most of the people that identify as white in the South have at least a 20 percent African ancestry. 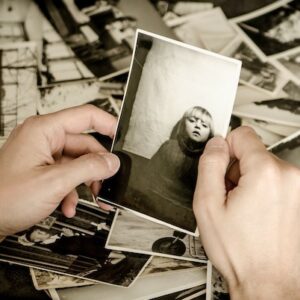 The satirical website The Onion once ran a story with the headline: “U.S. Dept. Of Retro Warns: ‘We May Be Running Out Of Past.”...
© LitHub
Back to top