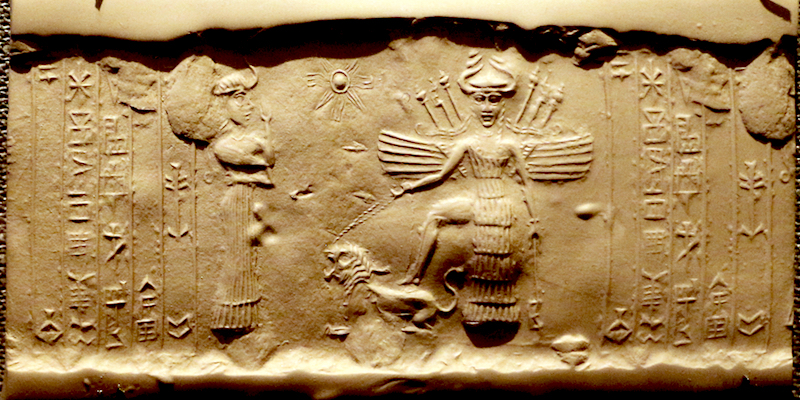 The Activist Poet Talks About Her New Book, Eruptions of Inanna

Groundbreaking activist poet and writer Judy Grahn has long worked to connect queer and feminist narratives across generations. After founding the Gay Women’s Liberation and the Women’s Press Collective in 1969, she published a number of poetry collections—including Edward the Dyke and Other Poems (1971), She Who (1972), and A Woman is Talking to Death (1974)—that brought crucial ideas about gender, sexuality, and freedom to the feminist movement; later, her collection love belongs to those who do the feeling (2008) would receive the Lambda Literary Award for Lesbian Poetry.

In addition to her work in contemporary feminist movements, Grahn has conducted years of research on Mesopotamian literature and ancient storytelling about feminine power, focusing in particular on the ancient Sumerian goddess Inanna. Her latest book Eruptions of Inanna, published this month by Nightboat Books, is anchored in the interpretation and retelling of eight stories about Inanna, which were authored by Sumerian writers and in which, Grahn writes in the intro, she sees “pre-biblical roots of justice, gender, and erotic power.” I asked her about the stories’ connection to contemporary politics, her extensive work on mythology, and finding queerness in ancient stories. (This interview was conducted via email.)

Corinne Segal: How would you describe your relationship to the study of Mesopotamian literature, and the figure of the goddess Inanna in particular?

Judy Grahn: Frankly, it came about from a strongly felt need. I came into civil rights and feminist consciousness in the middle of the American war on Vietnam, and the police and FBI war on the Black Power and nonviolent civil rights movements. I experienced the violence at People’s Park and at Altamont, and the news reports of the assassination of Harvey Milk in San Francisco, and the mass murder of nine hundred mostly African American men women and children by a trusted white man at Jonestown. The Left seemed paralyzed, while the Right moved into more overt white supremacy and homophobia. And religious fundamentalism, already excluding and punishing LGBT+ people, became more aggressive and threatening. Meanwhile Rachel Carson told us we faced a “silent spring” if we did not change our economic and philosophical habits.

The world, my friends and I decided, was lacking in mother love, at both the local, personal level, and the macro, religious and ethical level. A large number of us went looking for the goddess, among other things, any goddess who might give us a handle on establishing love, compassion and a maternal way of solving problems, as guiding principles.

Around 1980, someone told me that Helen of Troy had been a goddess, so I started there, writing my first book-length poem, The Queen of Wands, as a fragmented story of a fragmented deity. By the middle of the decade, I could see that Helen’s characteristics converged with those of the older goddess, Inanna, the Venus of the ancient Sumerians. I see the Mesopotamian literature, and the goddess stories in particular, as a lifeline, one that also tangles up in goddess stories from around the world.

CS: You’ve engaged with Inanna and the myths around her in previous projects; what drew you to continue exploring them for this book?

JG: I never stop learning more about her. And the more I learn, the more I am flooded with a radiant sense of well-being.

CS: What is Inanna’s importance to (or resonance with) contemporary LGBTQ communities, and lesbians in particular? In general, how would you describe the importance of ancient mythology to modern-day LGBTQ movements?

JG: The burning questions of my life have been to discern what obstacles prevent me and the people I love—“wounded communities” I sometimes say, though they are also vibrantly alive and creative—from living fully engaged, accepted, lives. This has meant changing attitudes and practices in psychiatry, the military, police, families, the public, the law—toward women, LGBTQI, BIPOC people, and nature. What can I do to further these changes?

As an activist poet and writer, the answer is, plenty. In particular, I’m occupied by addressing the roots of oppressive conditions, the origins of outdated and harmful ideas and practices. Of my three books being released recently, the embedding of white supremacy in early childhood as a way to protect destructive family secrets is the subject of one, Descent to the Roses of a Family: A Poet’s Journey into Anti-Racism for Personal and Social Healing. A second book, Touching Creatures, Touching Spirit, addresses consciousness and psychism between humans and creatures, not just dogs and cats but also beetles, a dragonfly, a coyote, a lizard, and more. And my third book is Eruptions of Inanna. To me, this journey into ancient mythology addresses the stickiest problems of all, the limitations of religions. While many individual sects and priests, pastors, and rabbis have moved beyond outdated Medieval ideas, the fact that the texts remain limited and excluding, even blaming, of groups of people—women, the whole LGBT alphabet, and so on—means permanent social change is impossible. I don’t think I am the only Gay or nonbinary or female person to experience the particular pain of social cruelty, and exclusion from the greater definitions of, shall we say, cosmic Love.

The texts themselves must be addressed, and now that the ancient mythology that directly impacted the Abrahamic texts is available, it is clear that initially women had sacred place/office, with numerous goddesses who were powerful creation deities. Inanna has a female goddess companion who is as close to her as the male lover of King Gilgamesh was to him. The research of Will Roscoe and others has made clear that homosexual and transgender people held sacred office and participated in her rituals. And Inanna is both immanent within, and protective of, nature. Her radiant powers are erotic and interactive, accessible and creative. Her stories are richly psychological.

CS: In the book, you write of being “haunted” by the relationship between “intensely desired female beauty,” shame, and death in our society, and wanting to address that tension in your writing. Why has Inanna, and the myths around her, been the vehicle for you to explore that relationship?

JG: Marilyn Monroe’s suicide made headlines when I was twenty-two years old and struggling to find my place in the world. We were both working class in background, but there any comparison ended. While I was a doctor’s assistant by day and a pariah dyke wearing boys’ clothes by night, Marilyn was the most heterosexual, “most beautiful” and most desired in the public world. She was a star, she kept company with America’s biggest male stars—Mickey Mantle of baseball, Arthur Miller of literature, John F. Kennedy of politics. And at what seemed the height of a gloriously successful career, she killed herself. Or that was the story. then.

Since, it has changed, from a conspiracy that she was murdered, to the more plausible reason: the accidental overdose of an addict. I was upset by her death; if she could not succeed in life, how on earth could I? And yet, her image did not fade; she continues to hold a position as an icon of sexual power. In Inanna’s myth about her descent into the underworld and return with the power of clear seeing and justice, we can see the roots of contemporary icons of beauty and talent who rise, fall, and return as a certain kind of pop “goddess” or star.

CS: What books, scholars, etc. did you look to for information or inspiration during your writing process for this book or previous projects on Inanna?

My primary sources besides Wolkstein and Kramer are Betty De Shong Meador’s Lady of Largest Heart and the Electronic Text Corpus of Sumerian Literature. I read several versions of the Epic of Gilgamesh, settling on The One Who Looked into the Abyss by John Gardner and John Meier, I also chose the King James Bible for research on the Book of Job, backed by the Hebrew Bible.

Other writers and researchers: my friends and colleagues Will Roscoe, D’vorah Grenn, and Martha Shelley were extremely helpful. Rita Casey’s dissertation, Glen Hartelius encouraging an early article of mine, and teaching this material in women’s spirituality programs all furthered my understanding enormously. In earlier years, I was inspired by both H.D. and Charles Olsen on reworking ancient texts and myths. Early on I read Homer, Euripides, Goethe’s Faust, and Thorkild Jacobsen, Noah Kramer, accounts of the excavation of Ur by Leonard Woolley, as well as numerous articles on all kinds of related subjects.

“Now that we have access to translations from tablets written many hundreds of years before the biblical texts were compiled, questions arise.”

CS: How do you approach the challenge of writing about gender and sexuality across time periods and societies that understood those facets of identity so differently? In other words, what are the challenges of interpreting ancient history with a contemporary queer lens?

JG: I think interpreting history is a major challenge for anyone, and I don’t try to do it. My interest is poetry and mythology, which can be virtually timeless, and have ongoing psychological value. For example, people find great lessons pertaining to their own lives in Greek (and other) mythologies and in biblical and religious stories. Contemporary feminists from the writer/activist Starhawk to the late actress Olympia Dukakis have found great value in the plots and lush eroticism of Sumerian poetry dedicated to goddess Inanna.

I don’t know what everyday Sumerian people thought about homosexuality in any given era of their long history. I just know that many of their stories ended up in biblical stories—the flood myth, much of the creation story, many of the psalms, even Inanna herself in the (greatly diminished) character of Queen Esther. But now that we have access to translations from tablets written many hundreds of years before the biblical texts were compiled, questions arise. Where is female deity, why wasn’t that brought forward? Where are the homosexual and nonbinary and trans people that appear in poetry written to Inanna, especially if many parts of the Book of Job were present in the more ancient poetry? And where did the concept of original sin come from? I’m curious especially about some very different worldviews that crop up in literature about Inanna, or Ishtar, as she was also called.

And, to return to your question, regardless of how Sumerians held Inanna in their hearts, her poets are describing her not only as if she were an earthly woman with a developing life story; they are also describing a major element of life, an intelligent, interactive life force, one for which my own mainstream U.S. culture has as yet no word. So I’m interested in this as an ongoing development in—you could say—science. Our understandings of what the ancient Sumerians called “Inanna” is a work in progress. I have begun to comprehend that Inanna is a real power, not just a story. 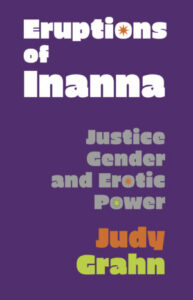 Eruptions of Inanna by Judy Grahn is available via Nightboat Books. 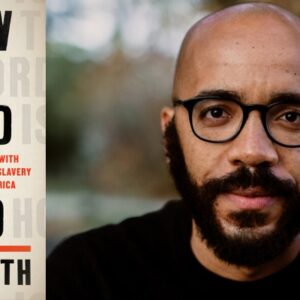