It's Going to Be Really Terrific

Let’s build the wall. And okay, we’ll pay for it, us Mexicans. But we’ll build it ourselves, and we’ll put an aid station every twenty kilometers, a proper shelter with doctors, food, water, beds where people can rest and gather their strength, and English classes. And most importantly, we’ll have lots of doors all up and down the wall, thousands of them. Doors that can only be opened from one side: ours.

Let’s build the wall. And okay, we’ll pay for it, us Mexicans. But first we’re going to ask for a construction loan from the government of the United States. Or the World Bank. Or, even better, the IMF. There will be a bidding process for the project of designing the wall. Another one for building it. And another for managing it once it’s ready. We’ll solicit bids only from our friends, of course. And the winning bids will come from our very closest friends. Those who design the wall will go way past deadline—way, way past deadline—years past deadline. (As architects they’re mediocre at best, but they’re our closest friends.) So the construction process will begin years late. And then there will be problems with the permits. And problems with the suppliers. And labor strikes. Two months after the first section is built, damp spots and cracks will appear, so construction will be suspended temporarily. The years will come and go, and with a little luck, so will presidents of the United States, until one who isn’t interested in having a wall comes along. Better still: one who asks that its construction be halted. (Obviously we won’t be paying back the loan.)

Let’s build the wall. And okay, we’ll pay for it, us Mexicans. Let’s build a green wall, an ecological wall—a hedge. More specifically, a hedge made of marijuana plants. We will of course first legalize marijuana as a construction material. And we’ll watch as the immigration patterns change: people from the north now flocking south to smoke our wall. Against all expectations, we won’t detain them. On the contrary. We’ll all meet up at the wall, and a new era of friendship and brotherhood will spring up between our two countries.

Let’s build the wall. And okay, we’ll pay for it, us Mexicans. But let’s build it as a tourist attraction, an amusement park. We’ll call it “The Wall of Shame,” or something like that. Right next to it we’ll build museums focusing on racism, imperialism, discrimination. And there will be viewing platforms so that we can watch what’s happening on the other side from a safe distance. Tourists will come from all over the world—Japan, China, Germany, Sweden. Our wall will make us a fortune and create thousands of jobs. Jobs that will be filled, of course, by immigrants who can’t make it across.

Let’s build the wall. And okay, we’ll pay for it, us Mexicans. An invisible wall, like the emperor’s invisible clothes. A wall that only smart people can see. We Mexicans will build it with invisible bricks, and invisible steel too. Freed from material limitations, we’ll be able to build it really, really high—a thousand meters high. And really thick: two kilometers thick. On the day we inaugurate it, we will say to the president of the United States, “Here’s your wall. It’s very high, and very thick, but only smart people can see it.” I’m sure the president will be thrilled.

Juan Pablo Villalobos was born in Guadalajara, Mexico, in 1973. He’s the author of Down the Rabbit Hole (2011), Quesadillas (2013) and I'll Sell You a Dog (2016). His novels have been translated into fifteen languages

The Making of a Tireless Literary Translator 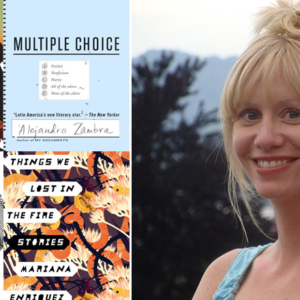 The Making of a Tireless Literary Translator

Megan McDowell, a translator from Kentucky living in Chile, has had eight books published in the past two years. “It’s...
© LitHub
Back to top