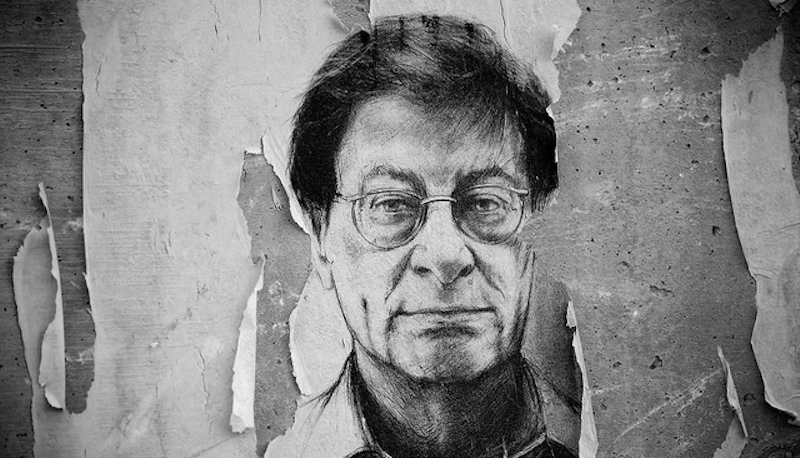 A Writer and a Poet in Communion

I was alone, standing, stripped to the waist, in a sandstone desert. Eventually somebody else’s hand scooped up some dusty soil from the ground and threw it at my chest. It was a considerate rather than an aggressive act. The soil or gravel changed, before it touched me, into torn strips of cloth, probably cotton, which wrapped themselves around my torso. Then these tattered rags changed again and became words, phrases. Written not by me but by the place.

Remembering this dream, the invented word landswept came to my mind. Repeatedly. Landswept describes a place or places where everything, both material and immaterial, has been brushed aside, purloined, swept away, blown down, irrigated off, everything except the touchable earth.

There’s a small hill called Al Rabweh on the western outskirts of Ramallah, it’s at the end of Tokyo street. Near the top of this hill the poet Mahmoud Darwish is buried. It’s not a cemetery.

The street is named Tokyo because it leads to the city’s Cultural Centre, which is at the foot of the hill, and was built thanks to Japanese funding.

It was in this Centre that Darwish read some of his poems for the last time—though no one then supposed it would be the last. What does the word last mean in moments of desolation?

We went to visit the grave. There’s a headstone. The dug earth is still bare, and mourners have left on it little sheaves of green wheat—as he suggested in one of his poems. There are also red anemones, scraps of paper, photos.

He wanted to be buried in Galilee where he was born and where his mother still lives, but the Israelis forbade it.

At the funeral tens of thousands of people assembled here, at Al Rabweh. His mother, 96 years old, addressed them. “He is the son of you all,” she said.

In exactly what arena do we speak when we speak of loved ones who have just died or been killed? Our words seem to us to resonate in a present moment more present than those we normally live. Comparable with moments of making love, of facing imminent danger, of taking an irrevocable decision, of dancing a tango. It’s not in the arena of the eternal that our words of mourning resonate, but it could be that they are in some small gallery of that arena. 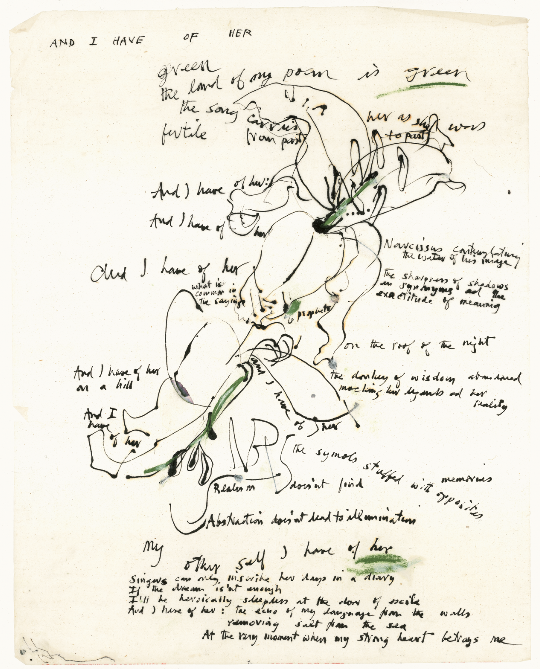 A drawing by John Berger in the days following the death of Mahmoud Darwish.

On the now deserted hill I tried to recall Darwish’s voice. He had the calm voice of a beekeeper:

A box of stone
where the living and dead move in the dry clay like bees captive in a honeycomb in a hive
and each time the siege tightens they go on a flower hunger strike
and ask the sea to indicate the emergency exit.

Recalling his voice, I felt the need to sit down on the touchable earth, on the green grass. I did so.

Al Rabweh means in Arabic: “the hill with green grass on it.” His words have returned to where they came from. And there is nothing else. A nothing shared by 5 million people.

The next hill, 500 meters away, is a refuse dump. Crows are circling it. Some kids are scavenging.

When I sat down in the grass by the edge of his newly dug grave, something unexpected happened. To define it, I have to describe another event.

This was a few days ago. My son, Yves, was driving and we were on our way to the local town of Cluses in the French Alps. It had been snowing. Hillsides, fields and trees were white and the whiteness of the first snow often disorientates birds, disturbing their sense of distance and direction.

Suddenly a bird struck the windscreen. Yves, watching it in the rear-mirror, saw it fall to the roadside. He braked and reversed. It was a small bird, a robin, stunned but still alive, eyes blinking. I picked him up out of the snow, he was warm in my hand, very warm and we drove on.

From time to time I examined him. Within half an hour he had died. I lifted him up to put him on the back seat of the car. Yes, he was a male. What surprised me was his weight. He weighed less than when I had picked him up from the snow. I moved him from hand to hand to check this. It was as if his energy when alive, his struggle to survive, had added to his weight. He was now almost weightless.

After I sat on the grass on the hill of Al Rabweh something comparable happened. Mahmoud’s death had lost its weight. What had remained were his words.

Months have passed, each one filled with foreboding and silence. Disasters are flowing together into a delta that has no name, and will only be given one by geographers, who will come later, much later. Nothing to do today but to try to walk on the bitter waters of this nameless delta.

Gaza, the largest prison in the world, is being transformed into an abattoir. The word strip (from Gaza Strip) is being drenched with blood, as happened 65 years ago to the word ghetto.

Day and night bombs, shells, phosphorous arms, mortars, machine-gun rounds are being fired by the Israeli army from air, sea and land against a civilian population of 1.5 million. The estimated number of mutilated and dead increases with each news report from international journalists, all of whom are forbidden by Israel to enter the Strip. Yet the crucial constant figure is that for a single Israeli casualty there are one hundred Palestinian casualties, of whom almost half are women and children. This is what constitutes a massacre. Most lodgings have neither water nor electricity; the hospitals lack doctors, medicines and generators. The massacre follows a blockage and siege.

Certain voices across the world are raised in protest. But the governments of the rich, with their world media and their proud possession of nuclear weapons, reassure Israel that a blind eye will be cast on what its soldiers are perpetrating. 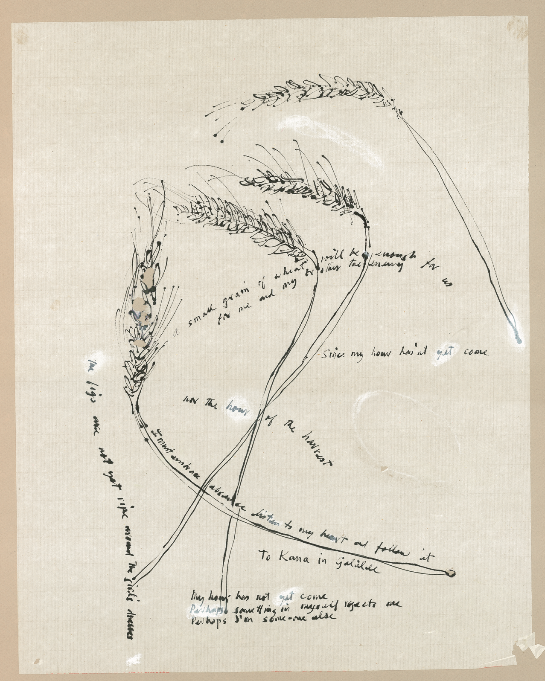 A drawing by John Berger in the days following the death of Mahmoud Darwish.

I am back, four months ago in Ramallah, in an abandoned underground parking lot, which has been taken over as a working-space by a small group of Palestinian painters and sculptors, amongst whom there’s a sculptress named Randa Mdah. I’m looking at an installation conceived and made by her entitled Puppet Theatre.

It consists of a large bas-relief measuring 3 meters by 2, which stands upright like a wall. In front of it on the floor there are three fully sculptured figures.

The bas-relief of shoulders, faces, hands, is made on an armature of wire, of polyester, fibreglass and clay. Its surfaces are colored—darkish greens, browns,  reds. The depth of its relief is about the same as in one of Ghiberti’s bronze doors for the Duomo in Firenze, and the foreshortening and distorted perspectives have been dealt with with almost the same mastery. (I would never have guessed that the artist is so young. She’s 26.) The wall of the bas-relief, in its crowdedness and with its ceremonial colors, is like “the hedge” that an audience in a theatre resembles when seen from the stage.

On the floor in front are the life-size figures, two women and one man. They are made of the same materials, but with more faded colors.

One is within touching distance of the audience, another is two meters away and the third twice as far away again. They are wearing their everyday clothes, the ones they chose to put on this morning.

Their bodies are attached to cords hanging from three horizontal sticks which in turn hang from the ceiling. They are the puppets, their sticks the control bars for the absent, or invisible puppeteers.

The multitude of figures on the bas-relief are all looking at what they see in front of their eyes and wringing their hands. Their hands are like flocks of poultry.

They are wringing them because they are powerless to intervene. They are bas-relief, they are not three-dimensional, and so they cannot enter or intervene in the solid real world.

The three solid, palpitating figures attached to the invisible puppeteers’ cords, are being hurled to the ground, head first, feet in the air. Again and again until their heads split. Their hands, torsos, faces are convulsed in agony. One that doesn’t reach its end. You see it in their feet. Again and again.

I could walk between the impotent spectators of the bas-relief and the sprawling victims on the ground. But I don’t. There is a power in this work such as I have rarely seen. It has claimed the very ground on which it is standing. It has made the killing field between the unreal spectators and the agonizing victims sacred. It has changed the floor of a parking lot into something landswept.

Mahmoud Darwish’s grave on the hill of Al Rabweh has now, following decisions made by the Palestinian Authority, been fenced off, and a glass pyramid has been constructed over it. It’s no longer possible to squat beside him. His words, however, are audible to our ears and will remain so and we can repeat them.

I have work to do on the geography of volcanoes From desolation to ruin
from the time of Lot to Hiroshima As if I’d never yet lived
with a lust I’ve still to know Perhaps Now has gone further away and yesterday come closer
So I take Now’s hand to walk along the hem of history and avoid cyclic time
with its chaos of mountain goats How can my tomorrow be saved? By the velocity of electronic time


or by my desert caravan slowness?
I have work till my end as if I won’t see tomorrow
and I have work for today who isn’t here So I listen
softly softly
to the ant beat of my heart . . .

The following appears as the introduction to Mural by Mahmoud Darwish, trans by John Berger and Rema Hammami, courtesy of Verso Books. Copyright 2009, 2017. 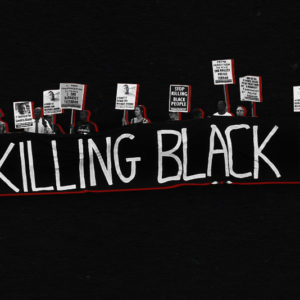 The following article contains graphic images of lynching. It was well after the Civil Rights Movement. Decades, even. Yet,...
© LitHub
Back to top
Loading Comments...