In this episode of Keen On, Andrew is joined by Jeanette Winterson, the author of 12 Bytes: How Artificial Intelligence Will Change the Way We Live and Love, to talk about her illuminating new collection of essays on technology.

Jeanette Winterson CBE is an English writer, whose novels have explored gender polarities and sexual identity, as well as the relations between humans and technology. She broadcasts and teaches creative writing and has won a Whitbread Prize for a First Novel, a BAFTA Award for Best Drama, the John Llewellyn Rhys Prize, the E. M. Forster Award and the St. Louis Literary Award, and the Lambda Literary Award twice. She holds an Officer of the Order of the British Empire (OBE) and a Commander of the Order of the British Empire (CBE), and is a Fellow of the Royal Society of Literature. 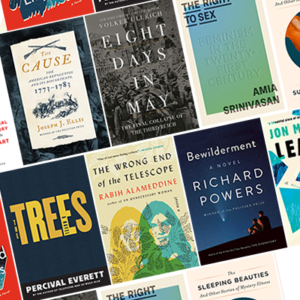 Richard Powers' Bewilderment, Rabih Alameddine's The Wrong End of the Telescope, Amia Srinivasan's The Right to Sex, and Ruth...
© LitHub
Back to top