Jamie Quatro: How Should a Christian Writer Be?

The author of Fire Sermon on God, sex, and Evangelical America.

A few pages into Fire Sermon, the debut novel by Jamie Quatro, I began to think of Gustave Flaubert’s The Temptation of Saint Anthony. Flaubert said the novel was “the work of my entire life.” From his first version of the manuscript in 1849 to its publication in 1874, Flaubert was obsessed with the work—even making revisions as he was finishing Madame Bovary. The novel possessed him; it was, in many ways, his passion.

Passion might be the perfect word to describe Quatro’s approach to fiction, a word that Flaubert’s Anthony would appreciate: the semantic synthesis of sensuality and Christ. Her story collection, I Want to Show You More, was heralded as a work of passion: characters charged with apocalyptic visions. Religious communities descending into fanaticism. Characters confusing lust with love, and confusing doubt with faith.

Fire Sermon also pulses with passion, but there’s a deeper, more theological connection with Flaubert’s novel. I shared with Quatro the lines from Flaubert’s work that first stirred me: “Sunset in the desert. Enfeebled by prolonged fasting, the hermit finds himself unable to concentrate his mind upon holy things. His thoughts wander; memories of youth evoke regrets that his relaxed will can no longer find strength to suppress.”

The spirit of those lines made her think of a scene from her novel, when the main character, Maggie Ellmann, thinks about sundown in Phoenix: “Twilight signals egress . . . sunset urging her to drive somewhere fast, to embrace, to be embraced.” Quatro says “Maggie relates that sunset-urge to a specific kind of sexual temptation, with James.” Fire Sermon begins with a swift, tight chapter set in Chicago, April 2017. Maggie, a former divinity student and budding poet, is in a taxi with James Abbott, an established formalist poet at Princeton. They were both “born and raised in the desert Southwest, allergic to peanuts, students of the Christian mystics and quantum theory and Moby-Dick.” They are both married to other people—and both in love with each other.

Fire Sermon is powered by Maggie’s desire, and told through an array of formal modes: letter, self-dialogue, poetry, journal, and prayer. Each chapter is like a sharp epistle of desire. For Quatro, “Maggie’s places of spiritual conflict—the struggles within her marriage, and the agony of her forbidden relationship with James—are both deserts of a kind.” Yet Maggie’s “deepest struggle is with faith itself. To believe or not to believe. That struggle informs everything else. If you believe, you stay faithful, you honor your marital vows, you repent of the affair. If you don’t believe: those tensions disappear.”

There is something countercultural about a contemporary writer speaking about fiction in these terms. Quatro’s approach to fiction makes me think of Paul Elie’s essay “Has Fiction Lost Its Faith,” in which he lamented that earnest Christian belief in fiction is “something between a dead language and a hangover.” He admits his own exaggeration—Elie’s a Catholic, so I think he’s making a metaphorical wink toward the shelved Latin Rite with his vocabulary—but voices a real concern. I asked how Quatro felt about Fire Sermon arriving in the literary moment that Elie describes. Do people long for fiction about faith, and the struggles we have with belief, temptation, and sin?

“Now is a crucial time in the history of literature that engages with faith, precisely because of the damage done by right-wing ‘evangelicals’,” Quatro says. “Though I bristle at using the word “evangelical”—a lovely old word that has been hijacked and tarnished by the very people claiming it. From the Old French evangile, from euangelos ‘bringing good news,’ from eu– ‘well’ + angelein ‘announce.’ An announcement of good news. Ha. Talk about a word becoming its opposite in meaning.”

Quatro turns to a favorite of hers: the poet Christian Wiman, who spoke of “that insistent persistent gravity of the ghost called God.” What does it look like for a Christian writer to be earnestly engaged in questions of faith and doubt? “Two options exist for an artist of faith in our current sociopolitical moment: give up and walk away, stop writing about anything to do with faith. Or: stay in the game. Be the voice of one crying in the wilderness: But that isn’t Christianity, that is a perversion of it. Try to forge from the rubble a new language, a new way of seeing and speaking about God.” Quatro says “for me, for better or for worse, there’s something in the sexually ecstatic—its connection to the sacred—that might offer a way forward.”

Maggie abruptly ends a letter to God by wondering if Christ also died to remove “the pleasure” we experience: “How am I supposed to ask forgiveness for feeling what my body only naturally–” Maggie even uses the word “ecstatic” to describe her relationship with James, and it is the right word for Quatro’s sense of desire. If you look at the word “ecstasy” etymologically—ek, out; stasis, a stand—ecstasy means, in some sense, to stand outside oneself,” she says. “It describes the experience of profound union with another—God, in monotheistic traditions. And yet everything that produces the sense of being outside our bodies is located squarely within the body: sex, breathing exercises, meditation, psychotropic drugs. (For me, that endorphin hit during a long run.) In Maggie’s case, she describes that moment of sexual ecstasy you mention as both a ‘falling into herself and flying out of herself, both things at once.’”

Quatro continues: “It seems that if there is such a thing as ‘paradise,’ the only way to access it is through the body. All we can know of the immaterial universe, this side of death, is not in spite of, but through the material universe. This is why the doctrine of the Incarnation—Word becoming flesh, Divine becoming human, the eternal compressed into the mortal—has so much to say to me, as an artist.”

The lyrically precise and pointedly swift language in Fire Sermon brings me to another novel of ecstatic desire: Ron Hansen’s Mariette in Ecstasy. In that novel, a young novitiate who experiences stigmata communicates with Christ. In visions and whispers of prayer, he repeats a phrase to her: surprise me. I asked Quatro about how surprise relates to Christianity, and to Fire Sermon.

“The idea of ‘surprise’ related to a faith which says there are no surprises, because God is omniscient. One thinks of verses in the Psalms: ‘All the days ordained for me were written in your book before one of them came to be,’ or ‘Even before a word is on my tongue, behold, O Lord, you know it altogether.’ Or the gospels of Matthew and Luke: ‘Even the very hairs of your head are numbered.’ This concept—orthodox believers would call it a doctrine—of God’s omniscience raises the age-old question: If God knows what you are going to do tomorrow, how are you free to do otherwise? How can omniscience and free-will co-exist?”

Quatro’s a talented storyteller, and a serious thinker about these bigger ideas. This is not to say that fiction needs the structure of theology; that feeling alone is not enough. But it does speak to the staying power of literature about faith—and Quatro’s unique ability to find cosmic consequences for earthly desire. Quatro wonders about the duality of omniscience and free-will: “It seems like an impenetrable difficulty. But the trouble isn’t so much the concept as it is the language we use to speak of it. The attempt to attach words to something beyond language will always get us into trouble.”

“If God exists,” Quatro says, “(and even the word ‘exist’ is subject to scrutiny), He or She—or whatever hopelessly inept pronoun you choose—exists in some eternal ‘now,’ where everything from the quantum instant the universe exploded into being until its eventual burnout is happening simultaneously. One way I’ve tried to conceptualize it is to imagine two artists who represent time as a straight line across a canvas, from one edge to the other. The first artist approaches the canvas, places her charcoal on the left edge, and drags it across to the right. This is our experience of how time works. The second artist pulls out a giant ink stamp with a line already embossed on the rubber. She approaches the canvas and presses the stamp onto it; all of time appears at once.”

“Of course,” she concludes, “the example breaks down because in some senses God exists as the canvas, and the artist, and the line, and everything in the room . . . and now I get into another language-bound difficulty, because ‘existence’ is also a word subject to time-scrutiny.” She again returns to Christian Wiman: “God exists apart from our notions of what it means to exist, and there is a sense in which our most pressing existential question has to be outgrown before it can be answered.”

In Paul Elie’s essay, he wondered if readers who feel the weight of faith might find a writer “who can dramatize belief the way it feels in your experience, at once a fact on the ground and a sponsor of the uncanny, an account of our predicament that still and all has the old power to persuade. You look for a story or a novel where the writer puts it all together. That would be enough. That would be something. That would be unbelievable.” Fire Sermon offers a radical, transformative vision of the intersection between faith and desire. It is a book that takes sin seriously—and compels readers to see how eternal concerns can make for great, and disturbing, fiction. 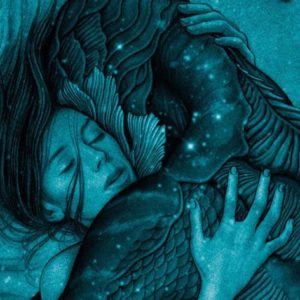