The following is from Gunnhild Øyehaug’s collection of stories, Knots. From a young man born with an uncuttable umbilical cord to a dissatisfied deer that yearns to be seen, this collection of stories ranges from the surreal to the mundane. Gunnhild Øyehaug is an award-winning Norwegian poet, essayist, and fiction writer. Her novel Wait, Blink was made into the acclaimed film Women in Oversized Men’s Shirts.

But he doesn’t­ want to talk about it.

“No,” Roar says. “I ­don’t want to talk about it.” He looks out the living room window. A snail with a yellow shell drags itself slowly over the glass on the outside, leaving ­behind a shiny trail across the copper beech, which is in its prime, leaves shimmering in the evening­ light. It’s summer. “Period,” he says, then leans forward and taps the lowest drop on Grandma’s crystal chandelier. It tinkles gently­. “Do you know what happened to Henrik the other day?” he asks. “No,” I say. “He was out walking . . .” Roar looks at me, asks me not to look at him like that, he’s said he ­doesn’t want to talk about it, and that’s that, he’s going­ to tell me about Henrik now, and what happened to Henrik the other day. “Are you happier with how I’m looking at you now?” I ask. He nods. “Henrik was out walking,” he starts. And then tells me about what happened to Henrik when he was out walking—­that he yawned just ­under a low branch and ended up with a tangle of tiny spiders in his mouth—­ while I look at his eyes, which are big and light, light blue, with long lashes, and think that he seems to be gazing inward, it’s as if he can hardly bear to look at me, even though he is looking at me, that his irises are actually at the back, that they’re­ in fact looking in­ ward, into his head, and I wonder why he doesn’t want to talk about it, even though ­there’s perhaps not that much to say. Maybe he thinks it would be too much for me, that one of us might start to cry, and that the other wouldn’t­ know how to deal with it. Even though we grew up together and know each other inside out, and have flicked the lowest drop on Grandma’s old crystal chandelier to hear it tinkling a thousand times before. He’s just hung it up. I gave it to him when I arrived, I wanted him to have it, thought that if he could tap the lowest drop and hear it tinkle . . .

When he looks out the window that way his eyes are almost transparent, and his face is so pale, so pale that he’s almost black. “Ugh,” I say. “You’ve­ got that look again,” he says. “How about now?” I say, and raise my eyebrows as high as I can, while squinting. Roar smiles, we almost laugh. “Did you hear about Ole’s friend?” I ask, and he says that he ­hasn’t. “It’s not nice, just warning you,” I say. “Well, come on then,” he says. “He was out on his motorbike, had just come out of a tunnel when a bird flew straight into his chest, and then, because­ of the air drag, the bird was pushed up into his helmet, ­under the base gasket and into the helmet, dead and bloody, and Ole’s friend threw up instantly, inside the helmet, everything hap­ pened so fast, he wobbled along the road for a few meters before he managed to stop the bike, then pulled off his helmet, which was full of bird and vomit, ran down to the fjord and ducked his head in the salt water,”­ I say, and feel my heart racing ­because I said that the bird had died, I have to look at the floor. “Yuck,” Roar said. “I found a huge white maggot in a Toblerone once,” he says. “In the letter R.” “No more Toblerone,” I say, and bite my lip. Everything I say seems to come out wrong. But Roar laughs and says: “No, it’s a shame. It’s given me a complex about the first letter of my name, as well. Which is even more of a shame. I took it symbolically and thought that it must be a sign, ­simple as that; that my name is home to a huge white maggot. I’m thinking about changing my name.” “To what?” I ask. “Joar,” he says. “Well, you’d better change the last R too,” I say. “Joaj.” We laugh. “Just think, your name means loud noise in English,”­ I say. “Yes, just think,” Roar says, and I think about it and realize that I’ve said the wrong ­thing again, as his name will­ soon mean silence, was that what he meant?

“Do you want some whiskey?” he asks, and I say that I think it tastes of soap. Roar snorts, pours some whiskey. “Cheers,” Roar says. “Cheers,” I say, and take a sip. I shake my head without thinking. Roar smiles. “But I like the burning sensation in your throat,” I say. We sit in silence and drink whiskey. “To continue with our cavalcade of disastrous events,” Roar says, ­after a while, “I watched a magpie land in her nest in the ap­ ple tree down ­there, and then a raven came along and killed her.” “I didn’t­ know that ravens killed other birds,” I say. “No, but then ­you’re a person who thinks whiskey tastes like soap,” Roar says, and I have to look out the window to hide how thrilled I am that he said just that. It would be embarrassing if he knew how happy comments like that made me in a very special and hopeful way. It would be embarrassing if he knew that I was in love with him. “The raven pecked out all her feathers, dismembered her, and then only took the bits he wanted.” “That’s a bit cynical,” I say. “That’s nature,” Roar says. “And nature is cynical.” “Uncle­ Arve found a swallow once,” I say, “that was lying stone dead on its eggs. She’d­ killed herself brood­ ing.” “Once,” Roar said, interrupting me, pouring him­ self more whiskey, eyes open wide, “once our kittens ­were eaten by a tomcat that had managed to sneak into the cellar.” “Yes, because­ otherwise it was ­Uncle Arve who bashed them on the head.” And we have to laugh. I look at his hand holding the glass, think that I want it in my hair; his hands are thinner, ­they’re about to fade into thin air, ­there’s probably something perverse about me being turned on by them, even now, despite everything, I should be ashamed, they pull a cigarette from the pack in his breast pocket, they put the cigarette between his lips, I want them to leave the cigarette hanging from his lips, want them to bury themselves in my hair, from the neck up. But it’s too late to think that now. We don’t­ touch each other like that. We hug each other, we kiss each other on the cheek, we nudge each other in the ribs, we pat each other on the back. But we don’t­ bury our hands in each other’s hair, from the neck up. We don’t­ stand looking into each other’s eyes without saying anything any­ more. Especially not now. That might make us cry. And in any case, we always say something. “Listen,” I say suddenly, “there’s­ something I have to tell you.” I stop, feel my mouth getting drier and drier. But I have to do it now. “You know in films, how they often sit like we are and dread, dread what they have to say, so they say something ­else, that they ­haven’t hung up the washing, or something like that, or they tell each other what they’re­ dreading saying with a story about a friend.” Roar gives me a dark look. “Do you think that’s what I’ve been ­doing now, this evening?­ I said I ­don’t want to talk about it.” “I know, it’s not that, it’s something ­else.” “Okay,” Roar says. He waits. I look at him, take a deep breath, and say: “Well, all right. It was that.” Roar shakes his head. “To think that your name means ‘I’ve forgotten to hang up the washing’ in English­.” “Yeah, imagine,” I say and laugh a little,­ saved.

“The lightbulb in my bathroom has blown,” he says ­after a while, and lights a cigarette. “At night it’s dark ­there in a really­ weird way, I can stand for ages look­ ing at everything in there,­ the towels hanging from the hooks, the toothbrush in the glass, the toothpaste, the razor, the shower curtain, and it’s like I’m not in the room, like I ­shouldn’t be ­there, like I’m seeing things­ how they are when I’m not ­there, do you under­ stand what I mean? And that I shouldn’t­ be, that some­ how I’m a hindrance, but that’s almost why I stay there­.” I nod, feel frightened, he’s talking about it now, and I want him to stop. “And I like it,” he says. He looks at me. “Are you feeling horny, or what?” he asks, tilt­ ing his head. “What?” I say. “You’re­ stroking yourself on the thigh. You always do that when ­you’ve had a drink,” he says, and I have to look out the window again. “It’s just nature,” I mumble,­ “and nature is cyni­ cal.” He laughs. “Do you remember the time I hit you with some plastic tubing I found ­behind the house?”­ he asks, and I say what I always say, that I can’t­ re­ member, that I must have suppressed it, that it must have been so awful that I’ve decided to obliterate it, and what kind of kinky association is this anyway—­ “And I got ill,” Roar says, “after,­ it was the guilt, I had to stay in bed for two days and eat glucose tablets. And you came to visit me, but couldn’t­ sit on the edge of the bed.” We laugh. It starts to rain. Roar opens the window. “Come and hear,” he says. I go over to him, look out at the garden and the apple tree, the white bench, and listen to the rain falling on the copper beech. Murmuring. Tingling. My neck is tingling. He puts his arms around me, pulls me in, my cheek against his chest. This is more than I can bear. This is the drop that makes me run over. I ask if he can run his hand through my hair, from the neck up. “Hmm?” he says. I ask if he can run his hand through my hair, from the neck up. “Hell, no,” he says. “But as it’s you . . .” And then he does it, he puts his hand in my hair and pulls it through from the neck up. Leans his forehead against mine. This is the closest he’s been. He has his hand in my hair. But all I can feel is my throat burn­ ing, burning. “He’s got the ­whole world,” he sings. “Idiot,” I say in a hoarse voice, but then laugh a ­little, so he knows I ­don’t mean it.

From Knots. Used with permission of Farrar, Straus and Giroux. Copyright © 2017 by Gunnhild Øyehaug. 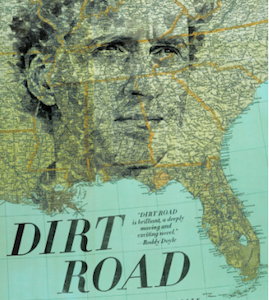 Dirt Road It was half five in the morning when his father wakened him. Murdo lay in bed an extra few minutes. There was a lot to think about....
© LitHub
Back to top