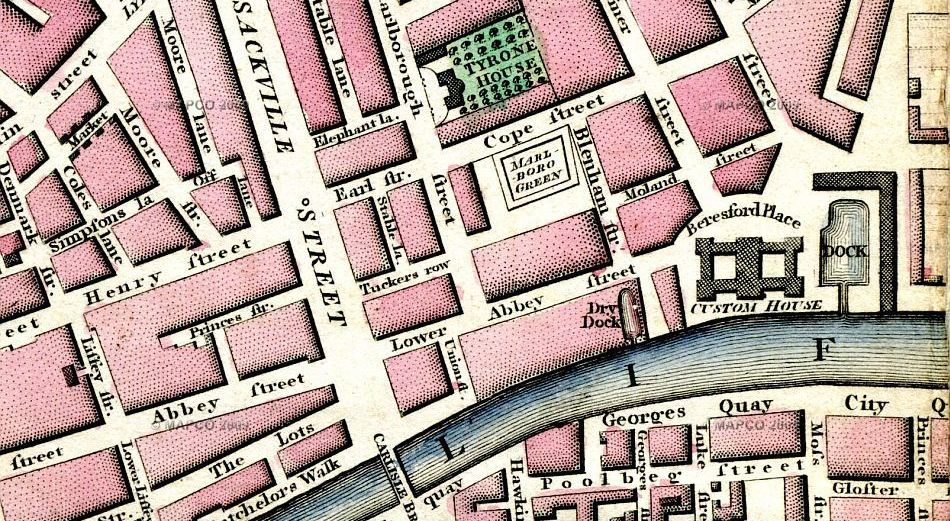 It’s Bloomsday All Over the World!

On June 16th, Everywhere You Go is a Small Corner of Joyce's Dublin

Did James Joyce’s Ulysses take place merely in Joyce’s imagination, or did any of it actually happen at all? Perhaps that sounds like a silly question, but it’s one that you can disappear down the rabbit hole trying to answer. Did the people who appear in the author’s landmark modernist novel actually exist? The answer: perhaps. Or, to put it another way: yes. Or another: no.

Joyce, who never returned to his home city of Dublin after 1912, assembled his cast of characters from memory, from the highly specific fact-checking enquiries he included in letters to his aunt, and from Thom’s Directory, a street-by-street index of who lived where in Dublin. Ulysses gives you a utopian Dublin that never existed, and can never exist. Perhaps that’s why, every June 16th—the date on which the “action” of Ulysses happens (I hope I don’t do the book a disservice by summarizing it briefly in this way: people walking around, thinking and masturbating)—reading the book and re-enacting the movements of its characters can seem so seductive: a portal into a pliable fictive universe in which you can imagine yourself as a character in a book for a few hours.

It might seem obvious, but Bloomsday did not take place. Ulysses presents a simulacrum of a city, filled with an array of walking, talking simulacra bearing the names of real people that, on my more paranoid days under Dublin’s overcast skies, put me in mind of the identity-grabbing space impostors that grow in cabbage patches in Don Siegel’s film Invasion of the Body Snatchers. Fact-based fiction is a form of zombie puppetry. What could be a worse fate than being fixed in fiction for all time, especially if Joyce thought you were an asshole? (Vivien Igoe’ new book, The Real People of Joyce’s Ulysses, uncovers “the biographies of scores of people that had been previously deemed to be fictional.”)

Nevertheless, for many of those not depicted in Ulysses, and that includes me and, I’m fairly sure, most people reading this article, the temptation of stepping into the work is great, perhaps because we can step out again—safe in the knowledge that we’ll never know what Joyce might have thought of us.

Bloomsday really got going as a concept in Dublin in 1954, with the alcohol-fueled cavalcade that included Patrick Kavanagh and Flann O’Brien traipsing around the city to visit, and in at least one instance urinate near, some of the novel’s key sites. Subsequently, Bloomsday has ballooned into a six-day festival that, this year, includes a public interview with the novelists Michael Chabon and Ayelet Waldman, to be held in a theatre at Joyce’s old school. Other Bloomsday attractions include events at the Martello Tower featured in the opening episode of Ulysses that’s now a Joyce museum, and readings at the pharmacy visited by Leopold Bloom.

So far, so inevitable. But what’s interesting about Bloomsday is how it has spread to become a global phenomenon. You don’t have to be in a dank Dublin bar to listen to someone in Edwardian costume stumble over the phrase “ineluctable modality of the visible”–now you can hear it in similarly dank pubs in other time zones too. This growth of Bloomsday as an exportable cultural phenomenon reflects the internationalism of Joyce, and the book—it was written in Trieste, Zurich and Paris between 1914 and 1921, and published in English in Paris in 1922. Ulysses is a work of world literature as well as of Irish literature, so no surprise that its commemoration has spread beyond Ireland. A cold caught on a breezy O’Connell Street in early June can be remedied on a baking Spanish beach on Bloomsday.

On the beach in Fuengirola, to be more specific, where this year Roger Cummiskey will organize the sixth annual Bloomsday Bathe, and participants will read from Ulysses in their own language—Roger told me that in the past people have read in Swedish, English, Spanish, Thai, Danish, German and Finnish; a multimedia event in Athens that will be simultaneously broadcast in Beirut; a series of events in Philadelphia, PA; a festival in Trieste, where Joyce lived, worked and wrote some of Ulysses; the Henrik Ibsen museum in Oslo (the young Joyce mailed overwrought, admiring letters to the Norwegian playwright) will host a number of lectures and the premiere of a new play about Joyce; there’ll be a James Joyce-style walk in Shanghai; in Auckland, New Zealand, Lucy Lawless of Xena fame will perform some of Joyce’s work; and, at Symphony Space in New York the 35th annual Bloomsday on Broadway will take place. In England there will be readings in a bar in Newcastle-Upon-Tyne, and the Cambridgeshire village of Melbourn will hold an episode-by-episode reading of the book, with local sites standing in for Dublin locations (an excerpt from the opening episode, for example, will be read at a car repair shop).

How has Ulysses, so precise in its geographical and chronological setting, become universalized in this way? Why not Samuel Beckett’s Murphy, in which a character head-butts the backside of a statue of mythical Irish hero Cúchulainn at Dublin’s General Post Office, or Flann O’Brien’s At Swim-Two-Birds, in which characters from cowboy novels set in the working-class district of Ringsend come alive and roam the city?

Perhaps it’s because Ulysses, which for much of its length breaks dramatically from the realism of Joyce’s earlier work, continues to be received as a realist text, which means that its relentlessly put back in its place. It’s as if the realist ghost won’t be exorcised, and returns to stalk the streets of Dublin, and elsewhere, every Bloomsday.

It could be that the urge towards putting Joyce in his place is to do with his current position as a figurehead of international Irishness, a filthy, swearing, drunken—yet heritage-compatible and beloved, if not loveable—genius. (A number of Bloomsday events around the world are part funded by the Irish Department of Foreign Affairs.) You like pubs? He’s a pub man. You like music? Sure, didn’t he used to sing. You like dressing up? He wore clothes too! You can read the bits you like, and ignore the obscure stuff.

The remodeling of Joyce into a heritage figure was no doubt a difficult conversion, something akin to Bono’s highly symbolic efforts in the 1980s to turn a Martello Tower of the kind featured in Ulysses into a home—you knock the ceiling out, put in a glass roof, but eventually you find you can’t live there. Despite your best efforts, Joyce remains curiously unhomely. Joyce’s Dublin is interesting to visit, but not one you’d want to inhabit for too long.

So maybe there’s something else going on with these imaginative explorations of Joyce’s Dublin (two Dublins, really: the Dublin he lived in, and the one he fictionalized). In the 1950s the Paris-based avant-garde group the Lettrist International, later to become the Situationist International, explored the streets of Paris using maps of other cities as a guide. The idea was to overturn the over-habituation one experienced in a familiar city and to imagine urban space in a different way—to confuse another city into you.

While it’s typically shorn of this avant-garde framing, there seems to me some of this potential in Bloomsday. There’s a double edge to the way Ulysses is reimagined as both comforting and discomforting. Reading Joyce as an urban writer, imagining the processes which went into the writing of the book, retracing the steps of his characters: these are not necessarily inherently conservative acts. There’s a reassurance in establishing a geographic connection with the past, an attempt to see what someone saw; but there’s also the jolt of the unfamiliar. You come to realize that while Joyce’s Dublin maintains a strange, uncanny relationship with contemporary Dublin, they’re not the same place.

I’m not immune to a Joycean pilgrimage. In 2013, as research for my book about the city, I spent a day visiting each of the twenty addresses at which Joyce had lived in Dublin, leaving me with aching legs and a notebook filled with descriptions of redbrick houses. What I found was a city that had been slowly nudged away from complete identification with Joyce. Some of the houses in which he had lived were gone; others had changed numbers, meaning that number 7 on a certain street was now number 5. My journey ended at the Sandycove Tower, Joyce’s last address before leaving Dublin in 1904, and the building from which Stephen Dedalus is banished at the beginning of Ulysses.

A little while later I returned to meet Robert Nicholson, the curator of the tower’s Joyce Museum and the author of The Ulysses Guide. We climbed the stairs, passing through a recreation of the room in which Joyce had stayed—the same one in which Dedalus narrowly dodged a bullet in the middle of the night—and reached the roof of the building. Nicholson raised the flag of the Irish province of Munster, powder blue decorated with three gold crowns, and told me it had been selected because it was the only flag mentioned in Ulysses. The Irish sea shimmered all around us in the bright light of the morning, and Nicholson pointed south along the coast, telling me that the line in Ulysses where Buck Mulligan and Dedalus look from that vantage point “towards the blunt cape of Bray Head that lay on the water like the snout of a sleeping whale” was an interesting one, because you can’t actually see Bray Head from there at all. But maybe Joyce could.

Karl Whitney is the author of Hidden City: Adventures and Explorations in Dublin (Penguin). His writing has appeared in the London Review of Books, the Guardian, and JSTOR Daily.

The Man in the Macintosh: One of Literature's Great Mysteries 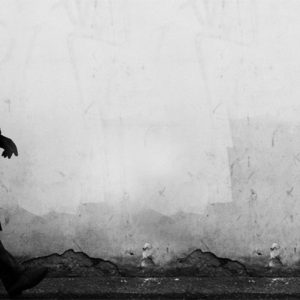 The Man in the Macintosh: One of Literature's Great Mysteries