“[Cruelty is] the unrelenting agitation of a life that has become unnecessary, lazy, or removed from a compelling force.”
–Nathan Gorelick

November, 1993: Between rehearsing at a New Jersey soundstage and stalking the New York streets in a deer hunter’s cap and filthy dishabille, Kurt Cobain was veering between the agonizing a la canona, and mercy, through a series of small foil envelopes.

In a vile mood: his mind chopped between his addiction and animus, but he is filled with bristling, bleak energy.

He was devising a morbidly tasteful service for the dead.

As such, he demanded, for Nirvana’s stage, an austere crystal chandelier, bunches of stargazer lilies and black taper candles.

“You mean like a funeral?” producer Alex Coletti inquired.

“Exactly,” said Cobain, the frustrated visual artist and compulsive perfectionist intent on seeing through his greatest vision: the story of his life and death—passion,

It was 46 degrees and raining on Thursday, November the 18th: before the show, a dour and fractious Cobain lay down, making piteous demands for KFC and help for his raw, agonized stomach.

The candles were lit; quiet wire brushes were delivered to Dave Grohl, and lilies were draped over the singer’s secret amp.

The Theater of Cruelty was about to commence.

Move back, then forward, to Cobain’s two suicide attempts, in March and April of 1994.

At the Hotel Excelsior in Rome, in 1993, desperate to seduce Courtney Love, whom he suspected was having an affair, he laced the room with precious jewels, holy statues and a chunk of the Coliseum he kicked off himself.

When she arrived and fell asleep, he wrote a suicide note citing divorce and Hamlet’s dreadful indecision, mixed a handful of Rohypnol with the champagne he had ordered, and turned gray as blood began to leak from one nostril.

“It’s the theatrical. . . That knocks me out,” Plath writes in “Lady Lazarus,” a poem that makes a sexualized, flawless performance of suicide.

Like Cobain, she would make a theater of her own death in 1963, after scribbling the following useless words: “Call Dr. Horder.”

Useless because no one would see the monstrous scene or paper until it was far too late. Further, and for dramatic purposes only, after safeguarding her children against the death rays from the gas oven, she left them mugs of milk and chunks of bread. The girl and the boy were, respectively, an infant and a baby, were utterly incapable of ingesting this fare. She then stuck her head in an oven, a symbol of the femininity she embraced and despised.

Plath reiterated her poetry in the staging of her death, and articulated her trauma, very well: her philandering husband, the poet Ted Hughes, would never recover from her death; her baby, her son, took his own life in 2009.

Kurt however, failed in Rome. His stage-directions were mawkish, and the tragedy lacked a dead body: “We’ll none of that,” as Shakespeare’s Theseus says.

He made another play in Seattle, choosing a secluded space, rife with irony—“To Die in a Greenhouse”: this sounds like one of Arthur Miller’s typically blunt titles.

He proceeded to set yet another scene, laying out his grimy works, flipping open his wallet to his ID, and stabbing a ridiculous, obviously tampered-with, note into an otherwise barren spill of potting soil.

Cobain then banged enough heroin to die twice, and shot half his head off.

A success? Yes and no.

Cobain was not a good writer: his letter, which, inexplicably labors over Freddie Mercury’s dynamite stage presence and slithers with self loathing, is, ultimately, a terrible send-off to one of the best artists of the last century.

It is so terrible that his grieving widow, who read this letter over a loudspeaker to a large assembly of his grieving fans gathered at the Seattle Center Flag Pavilion, she actually

heckled him between lines.

No, it is the MTV event that best stands as the last rites of Kurt Cobain, whose poor body lay unclaimed for days, was incinerated and, for some time, carelessly toted around in a leaking teddy bear by his widow.

“I need an easy friend,” is the lyric that begins the show, is what floats from the lovely, unsmiling lips of a man who could not be speaking a more plaintive truth.

A heroin addict himself, Antonin Artaud—avant garde writer, director and performer—believed that language was inadequate in the face of “trauma.” As such performances designated for his Theater of Cruelty, in the 1930s, were filled with noises: growls, cries, screams.

The Unplugged performance, its 14 perfect songs, are bookmarked by coughs, grimaces, small, strange noises and the occasional joke—including one directed to the Germs’ guitarist Pat Smear about Queen.

It is not until the last song that Cobain articulates his trauma, in Artaud’s manner.

It is the MTV event that best stands as the last rites of Kurt Cobain, whose poor body lay unclaimed for days, was incinerated and, for some time, carelessly toted around in a leaking teddy bear by his widow.

The other songs, six of which are covers, and all of which, barring the hopeful “About A Girl,” are melancholic, making reference to death, inadequacy, and that “unrelenting agitation” that

Is the set list a series of funerary readings? No. It is a carefully constructed—in so many interviews, Cobain is putting together complicated three-dimensional puzzles—story of where he has arrived.

He is deeply unhappy, utterly solitary (“I thought you died alone, a long, long time ago”) and estranged from his “her.”

“Her” is sometimes “you”: the songs form a comet-tailed ball in this regard. The amiable, complaining “you” in “About a Girl” is married in the song’s end, ‘I do, I

do,” where the you of “All Apologies” is an almost mythically vile figure “easily amused” and “choking on the ashes of her enemies.”

Here he feels “married, buried.” As though he is dying.

Many have taken note of the extraordinary power of Cobain’s cover of “In the Pines” or “Where Did You Sleep Last Night,” an old ballad that Lead Belly sang, and whose version they cover.

Some of the shock comes from the intimacy of its opening. “My girl, my girl” he sings, with such seductive grace. This address immediately opens the question of where his girl has been sleeping, a question that is repeated until it emerges as a roar.

As he screams the last chorus, in a middle-register rasp, his eyes open as if emerging for air, and slam shut like two slaps to the heart.

He softens to a trembling end, vibrating like an animal howling in its sleep, ending, with closed eyes, this story of crime, sexual betrayal and unspeakable solitude.

The audience went insane. Backstage, Coletti asked Kurt to do an encore.

“I’m done,” he said, in what should be his last words.

Kurt Cobain would be dead by the spring: he died alone, a long, long time ago.

He tried to name Nirvana’s last record, I Hate Myself and Want to Die; he posed for pictures with a shotgun in his mouth—why was he so alone in his raging state of thanatos?

He isolated himself, as if weaving a heroin-white cocoon around his frail body: he would be the hybrid winged angel-mutant he designed for the In Utero tour.

When he did die, his widow carried his ashes in a teddy-bear knapsack, and took them—a fair amount blew into the airport fans—to be made into tsatsas at a Buddhist Monastery in Ithaca, where they were boxed and stored when she declined to retrieve them.

Is the set list a series of funerary readings? No. It is a carefully constructed—in so many interviews, Cobain is putting together complicated three-dimensional puzzles—story of where he has arrived.

Apparently, a memorial service was later conducted with what was left of the ashes (one imagines an urn the size of a thimble,) and now, over 20 years later, all that is left is all that he planned, as the director of his demise.

He would make a flawless, filmed, recording, set ideally and scored mournfully by cellist Lori Goldston.

Then escape his friends and look at his sublime face—how he must have hated his beauty—before swallowing a gun and blowing it apart.

All in all, he killed himself “exceptionally well,” in Plath’s words, by leaving an artistic document, a record of what he did best and why it killed him.

“Good evening,” he says at the beginning of Unplugged. Somewhere in the world, he says this to someone, every night.

Every night he is a star.

Poet, author, and novelist Lynn Crosbie was born and raised in Montreal. An award-winning journalist and cultural critic, she has written about fashion, sports, art, and celebrity. She has a Ph.D. in English literature and a background in visual studies; she teaches at the University of Toronto and the Ontario College of Art and Design. Her volumes of poetry and prose include Queen Rat, Dorothy L’Amour, and Liar. She is the author of the controversial book Paul’s Case, about the Paul Bernardo–Karla Homolka murders, as well as the novels Life Is About Losing Everything and Where Did You Sleep Last Night, a Trillium Book Award finalist. Her most recent book, Chicken, is available from House of Anansi Press.

Rabih Alameddine: The Novels I Loved This Year 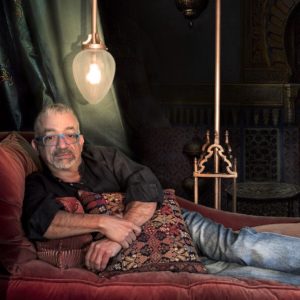 Rabih Alameddine: The Novels I Loved This Year

When I started thinking about the great novels I’ve read lately, or I should say, the most memorable, I realized that all of them...
© LitHub
Back to top