It’s Actually Pretty Weird That We Keep Animals As Pets

Just as we understand the difference between up and down without questioning the forces that make this so, we locate a position within a web of massively complicated human-animal ties without wondering how. I heard not long ago that pet ownership is one of the major global trends set to dominate a large section of the world economy. I heard (not so) recently that there are more pets than children in Japan. If my hearsay holds any truth then it points towards the fact that we accord a great deal of importance to beings that in reality we consider inferior. As a species we do other weirdly impractical stuff like dancing, watching the sea, and having sex for pleasure, and rarely do we look at our pets and wonder why we’ve chosen to take care of soft toys that move. If that’s what my own cat was, then that meant that I had some sort of itch to scratch. I wondered at what point I decided that he would belong to me rather than just live with me.

I believe that there are two types of cat: those who are gooey for humans, throwing themselves on the floor every time one walks past and those who are slightly hostile. Now, my cat was tolerant enough but definitely fell into the hostile variety. He was a house cat. He lived in a small flat when he was a kitten and got used to the small spaces. When we first met, he would let me stroke him but wouldn’t jump on, or be put on, a lap. I’m not keen on keeping cats in small spaces. They are territorial animals and like to prowl about, smell other cats’ pee and sharpen their claws on stuff. I gradually tried to let him outside, he seemed to like that, liked smelling around, liked to show other cats he was the boss. What I found extremely telling about this process was that as a result, he started to sit on my lap. This was after several years of wearing his ears backwards at the mere unveiling of a lap. I believe that awarding him his freedom increased his trust in me. I quickly considered how we could have enjoyed this harmony earlier in our relationship if we’d just sat down and talked about it; his general distrust of human contact, his agoraphobia, my need to handle a soft toy that moves. The ability to communicate in English would have put him on a par with me, surely? After all, he was a living being. I then imagined him as a human who couldn’t talk, thought about how I’d treat him differently. Then I thought, what if it was an accepted convention to keep mute people? How would their inability to communicate set them apart from “talking” humans?

“As a species we do other weirdly impractical stuff like dancing, watching the sea, and having sex for pleasure, and rarely do we look at our pets and wonder why we’ve chosen to take care of soft toys that move.”

My new novel, The Biggerers, is a dystopian tale about big people who keep little people as pets. This was always the one-line pitch but it’s only now, whilst going back through my narrative choices when writing The Biggerers, that I realize how I reached this idea. I was trying to create a pet-human dynamic that would either impose human qualities, such as speech, onto a pet or somehow demote a human to the status of pet.

The first idea conjured up images of Peter Rabbit and Dug the Dog from Up. It would have altered the tone of the book. However, I struggled to work out a suitable motivation for keeping real people as mute companions. The whole thing struck me as creepy, unconvincing and loaded with fine lines. There would have to be a novelty factor, a consumer pull. So, I kept the mute people but shrank them to about the size of a wine bottle. Suddenly, they were repositioned at the level of pet. They could legitimately be owned by big people who believed they were caring for them. My cat morphed into a tiny female being called “Jinx.” Jinx’s naivety juxtaposed with the complexities of her future-world owners begged the question: how can the inability to communicate form a barrier to freedom?

In The Biggerers, a dog-owner wonders if his dog would leave him if given the option to be free. I thought not; dogs are loyal (especially that one) but this character raises an interesting question: at what point is accepted oppression acceptable? In the novel, is it the point at which the system knowingly imprisons the little people? Or, does awarding them the realization that they want to be free represent a higher degree of freedom? ‘”It’s spooky,” people have said about my book. “It’s terrifying,” and perhaps the strangest comment of them all: ”It’s plausible.” I find that when examined closely, pet ownership is a bewildering, indulgent plethora of conflicting standards.

I was living in France in 2015 when the law there was changed to define animals as sentient beings. The word “finally” was implied, of course. Yet having spoken to older generations in France (and in England, for that matter) about the routine process of drowning unwanted kittens or sending them to sleep with chloroform, and once having found a mewling carrier bag full of kittens in a wheelie bin, I pondered over the point of having a pet at all if its offspring were considered disposable. I’m sure many people would agree, would shake their heads disgusted. At one point in The Biggerers the characters bring up the fact that “littlers” can be designed according to the aesthetic preferences of the owner. From one point of view, this imitates the controversial practice of people designing their own babies. From another, it questions why someone might choose to own a Pomeranian a Collie or a Pug. There are certainly character traits in each of these breeds which might render them desirable pet choices, but it’s undoubtedly the decorative aspect that takes precedence; it seems like we love our pets conditionally. We style them into our lives rather than welcome them. I always claimed that if I had to choose a pet from a rescue center I wouldn’t get past the first cage.

It’s only retrospectively that I’ve realized how eerily natural the idea of keeping mini people is. The whole process has led me to conclude that thematic questions in narrative are often formed by readers. Having figured out what my book was trying to say, stripping out or tweaking the sections that may have labored or undermined that point somewhat, there we had it, the themes were there all along, big themes, building-blocks-of-life themes sewn in right from the start, freedom, oppression, power. Having realized this, I told my cat all about it. I’m sure he would have loved to give me a thumbs up.

After studying at Kent University, Amy Lilwall went onto a Master's in The Contemporary Novel and a PhD in Creative Writing. She lives in Falmouth, Cornwall. Her novel, The Biggerers, is available from Oneworld Publications.

Who Exactly Was the Original Jezebel?

Garrard Conley and SJ Sindu on the Mainstreaming of Queer Identity 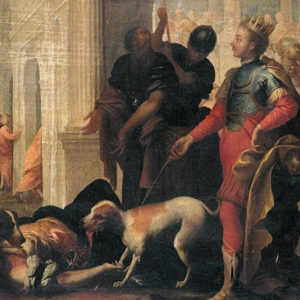 Who Exactly Was the Original Jezebel?

The story of Jezebel epitomizes how preoccupations with progeniture, female ambition, and female sexual autonomy were gradually...
© LitHub
Back to top