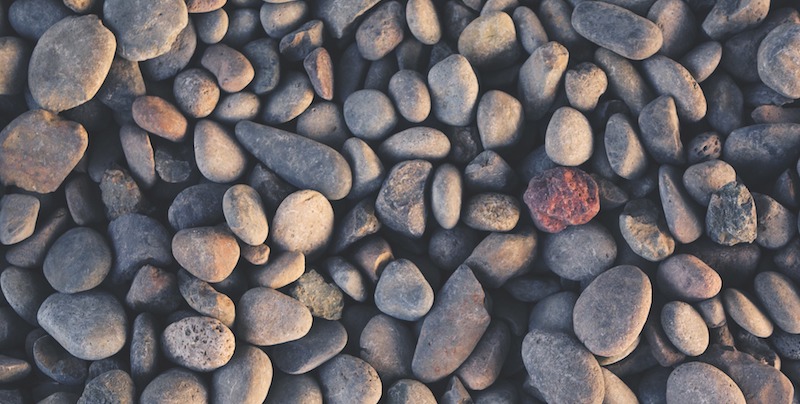 “He’d pictured an old age lolling by the pond at the foot of his backyard.”

One August afternoon in 2018, after lunch and before my father’s nap, my younger sister, Timmie, and I sat down with him in his living room to ask about his life. It felt like our last chance to understand him; he was nearly eighty-six and his once-lush conversation was as clenched as winter wheat. He clearly mistrusted our agenda. The way he sat in his blue armchair—chin low, lips tight, gray hair batwinging from his enormous head—called to mind a nineteenth-century caricature: Boss Tweed astride his empire; the cantankerous Tories.

We began gently, at the beginning, which was probably a mistake, as he hated his Pittsburgh boyhood and being Theodore Wood Friend, III, known as “Dorie” to his friends (and later as “Day” to us). Being raised by old-school Wasps was like being raised by a minibar. Timmie asked, “How would your parents have described you?”

“They would have described me as a baby. And then they would have described me as a boy.” Timmie glanced over: Uh-oh. He was just checking the box: I owe my children this courtesy. I was of like mind, a paramedic filling out the forms: Did you take every possible measure? I’d suppressed my expectations for so long it felt like a form of filial piety. But Timmie still hoped he might finally confess that he loved us more deeply than, for secret reasons, he could ever reveal.

He closed his eyes and said, “I’m sort of hungry for ice cream.”

“You had some a short while ago,” she said.

He frowned. Day loved sweets. In college, he got fired from a summer job for filling doughnuts with too much jelly. When we lived in Manila, in 1967, he spent two days in a hospital, as Mom noted in a doleful letter home, “under observation for—you won’t believe it—chewing up and swallowing a Christmas tree ball! We had a rather elaborate cake in the shape of a dragon and the eyes were glass balls. Dorie thought they were candy and ate one.” Two years later, Day wrote Mom from Amsterdam to say, “Drinking ‘young gin’ (tough) rather than lemon gin (a little sweet) because I want the waiter to realize I am tough. Of course, you realize, my lovely, that I am at least a little sweet. I like a lot of brown sugar on my cereal and a lot of white sugar in my tea and a lot of sympathy in my boyish disconsolations.”

He was prey to darker desires, too, but he hid those better. Timmie tried again: “If somebody wrote your parents and said, ‘Tell us about your son, what’s he like?’ what would they have said?”

“Nobody did that.” His laugh was a rueful bark. “Nobody cared.”

“So no one cared about you when you were young?”

“Well, I cared about myself.” He laughed again, more softly. “But, no.” He turned his reading lamp to glare the bulb at us. You go to the station to file a missing person report, and suddenly you’re the suspect.

I tried to turn Day, heeling wide: “What do you think you’re best at?”

Okay. “How do you feel you’ve contributed to the world?”

I glanced at Timmie, an interior designer who has Mom’s darting humor and radiant smile. Born six years after me, she effectively grew up in a separate wing of the house; we got close only later. “Want to elaborate, at all?” I asked.

Shooting me a deadpan look—Yay, us!—Timmie asked, “Is there anything you wish you’d done?”

“President of the United States?”

“Yes.” He enjoyed naming the presidents in order. “And I wish I’d played music, especially the guitar. All I ever did was turn on the phonograph.”

“I never knew that,” I said. “I wish I’d played the guitar, too.” My children took lessons for years, but, nah. We’re the anti–Partridge Family.

Timmie asked, “Is there anything you wish you’d spent less time doing?”

“Answering questionnaires,” he said. “I’ve answered hundreds of them.” He backhanded our question away.

Since Mom died, in 2003, Day has lived alone in their house in Villanova, a leafy, DUI-friendly Philadelphia suburb. These days he has a bookkeeper and a care man­ager and round-the-clock aides to coax him out of bed and make him comfort food. My family—my wife, Amanda, and our twelve-year-old twins, Addison and Walker—and Timmie and her family had come to be with him for a few days. He mostly sat at the dinner table, reading the Times and scowling at commotion. Waking from a catnap, he’d grimace to find himself surrounded by walkers and grip bars and stair lifts and toilet commodes, the parapher­nalia of decline.

When he went to a rehab facility after one of his hospital stays, he’d begin his care conferences by saying, “Please be candid—I am not an expert in me,” then glower at the nurses who announced his “inability to transfer” and need for help with “lower-body bathing” and “self-cleaning management.” He’d been so careful to greet them brightly: “Good morning, Kaila/Judith/Shani!” I am perfectly well and do not belong here. He’d pictured an old age lolling by the pond at the foot of his backyard, dispensing breadcrumbs to the koi and wisdom to us. He told us so in 2008, as he distributed copies of his do-not-resuscitate form.

He was able to maintain that seigneurial deportment for years, greeting me heartily when we arrived—“Taddio! How’s the man?”—and launching into an account of a recent conclave. When he detailed the workings of one of his boards or institutes or interfaith groups, he’d get side­tracked so often that Timmie and I adopted a shorthand for his digressions. “Billy Grassie” marked a byway of cre­dentialism, and “Metanexus” a plunge into the metaphysi­cal weeds. “My friend Billy Grassie,” he’d remind us, “is the founding director of the Metanexus Institute, a kind of agora, or marketplace, where scientific inquiry and reli­gious belief can wrestle with each other in mutually play­ful and profitable exchange. Well, Billy is a very able fellow with a PhD in religion. . . .” Day classified everyone he knew as “able” or “very able,” enumerated their “vectors of inquiry,” and situated them as “a very bright economics PhD from Yale” or “a keen thinker on cross-cultural folk­ways and the first Marshall Scholar from Guam.” As con­versation it was broccoli, but there was a Meatless Monday comfort to it: nothing had gone badly wrong yet.

He’d pictured an old age lolling by the pond at the foot of his backyard, dispensing breadcrumbs to the koi and wisdom to us. He told us so in 2008, as he distributed copies of his do-not-resuscitate form.

Our brother, Pier, the middle child—a six-foot-five dog lover, athletic and equable—doesn’t use our shorthand. His solicitude about Day underlines their resemblance: They wear fleeces, love math, and prize order. Pier, an exec at an investment firm, had come down with his family the week­end before, asked Day no bruising questions, and left him in a better mood than when he’d arrived. Pier’s steadiness mystifies me, as he, too, was deeply stamped by Mom’s out­look; her catchphrases, such as “Smiling the boy fell dead,” were rescue signals disguised as proclamations of buoyancy. Not waving but drowning. In 2005, Timmie had a liver transplant. When she awoke eleven hours later in the ICU, we told her the doctors said she was doing very well. From under her leaded blanket of anesthesia, she murmured, “I . . . aim . . . to . . . please,” an entirely Mom-ish remark.

Day, who loved bathroom humor and had a booming laugh, could be witty on occasion. His index to his Bancroft-winning Between Two Empires contains an entry about the emotional reactions of various Filipino politicians that sneaks in a reference to Mom and her behavior as he was writing the book: “Tears: shed by Quezon, 51; shed by Laurel, 212; shed by Osmeña, 236, 237; shed by Elizabeth, passim”—or throughout. But he almost never made fun of himself.

He’s not going to start now. When we arrived, the day before, he was in the bathroom swearing at his caregivers—“Fuck! Don’t yank at me!”—his voice squawking over the baby monitor on the kitchen counter. When his care man­ager asked if he was in pain, he cried, “I’m in emotional pain!” And when his cane slid off his chair with a bang, he awoke and roared “Goddammit!” at Timmie, because she was nearest. Newly vulnerable, he is more determined than ever not to be.

At lunch, I’d tried to start Day reminiscing by recalling how he’d taught me to skip stones across a creek near Buffalo, where we grew up.

Walker said, “I don’t get how that works, Grand-Day.” He’s determined to beat my record of eleven skips.

“No,” Walker said, “I mean how the stone skips across the water so many times without sinking.” He cocked his head. Like his grandfather’s, it’s larger than you might rea­sonably expect.

Day reflected. At times, now, he seems to want to lay his great, heavy brain down. “I am conversant with the art, not the science,” he said at last. One of his best memories was when he was seven or eight, and his mother showed him how to skim a stone across a pond. “Watch!” she called, and her stone skittered over in four ricochets. “My miraculous mother,” he later wrote. “I was filled with happiness. As I grew older, I felt challenged by any flat body of water to find a skippable stone.” 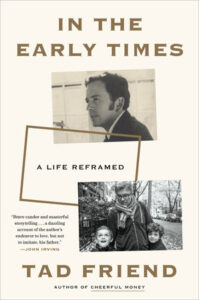 Tad Friend is a longtime staff writer for The New Yorker. His memoir, Cheerful Money: Me, My Family, and the Last Days of Wasp Splendor, was chosen as one of the year’s best books by The Washington Post, Chicago Tribune, San Francisco Chronicle, and NPR. He lives in Brooklyn with his wife—Amanda Hesser, the founder of Food52—and their twins, Walker and Addison. 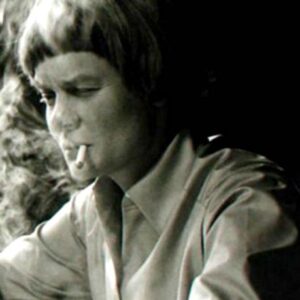 As WWII entered its final year, Iris Murdoch and her best-friend Philippa Bosanquet (or Pip, as she was to Iris), were in the middle...
© LitHub
Back to top
Loading Comments...