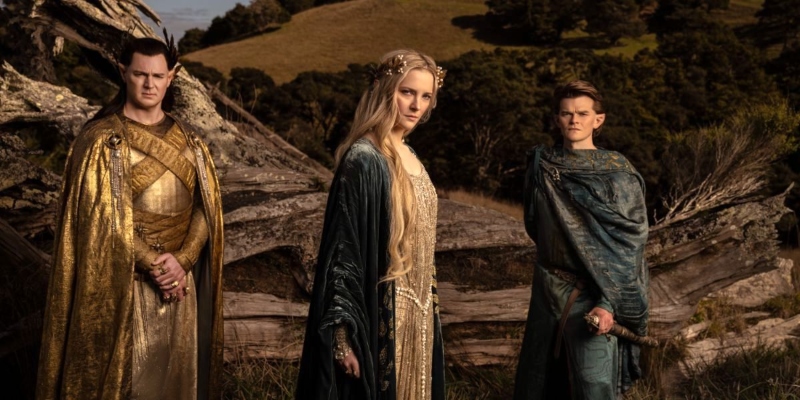 Is The Rings of Power for Lord of the Rings Diehards or Casual Fans?

Artist/JRR Tolkien devotee Jenna Kass and TV critic/fantasy philistine Dylan Roth are a married couple who have joined forces to review the new original series The Lord of the Rings: The Rings of Power. Can this latest on-screen voyage to Middle Earth satisfy both a diehard with the wisdom of the Eldar and your average Sam, Pip, or Merry?

DYLAN: To begin with, my esteemed and espoused colleague and I have very different relationships to The Lord of the Rings as a source text.

JENNA: I mean, for one, my relationship is with the text.

DYLAN: Oof! Dinged right out of the gate! It’s true, though—in three attempts to read the books, I’ve never gotten as far as Khazad-Dûm. High fantasy isn’t my preferred genre to read or to watch, but like most people of my generation I was swept up in the splendor and excitement of Peter Jackson’s Lord of the Rings film trilogy, which I’ve watched front to back at least a dozen times. This is probably the context that the producers and financiers of The Rings of Power are expecting from the bulk of their audience, whereas your interest, Jenna, is coming from a more educated place. One that, I imagine, you have in common with many readers here on Lit Hub.

JENNA: “Educated” is not necessarily the word I’d use, but yes, I’m the one in here who knows the names of the Two Trees of Valinor. (They’re Telperion and Laurelin, for those wondering.) I fell in love with the books very early, and did an annual read-through of the trilogy through much of my late teens and twenties. I have in fact read The Silmarillion on purpose, more than once. While I loved Jackson’s movies well into my teen years, at this point I find myself frustrated and dissatisfied with his vision—do not get me started on Arwen, Éowyn, or Faramir, or basically any of The Return of the King.

DYLAN: Not today, at least. The Rings of Power is set during Middle Earth’s Second Age, about which I know nothing other than the dribs and drabs that I’ve picked up from you over the seven years of our relationship. I understand that the series uses a mix of original and refurbished characters and concepts from the Sil and other Tolkien back matter.

The first episode is centered primarily on the elf Galadriel (Morfydd Clark), here reimagined as a military commander on a single-minded quest to avenge her beloved older brother. It’s been centuries since the elves came to Middle Earth to face the evil of Morgoth, and though Morgoth himself has been slain, Galadriel suspects that his lieutenant Sauron is still out there and will not rest until she can confirm his death. She’s the only one still fighting the war, and her playing the role of Only Sane Elf is, admittedly, a little exhausting.

JENNA: That’s one way of putting it. I came to this show telling myself I wasn’t expecting—or necessarily looking for—orthodoxy, that instead my focus would be on whether this felt like Tolkien to me in the way that the best moments of the Jackson films did. But I have to admit, I found myself constantly jarred by the mix of canon (Elrond is the Herald of Gil-Galad, who is the High King of the Elves) with invention (We’re just gonna change the context in which the elves left Valinor, huh? Where’d you get those ships, buddy?).

I have to admit, I found myself constantly jarred by the mix of canon with invention.

As a result, to me, there’s a flattening of the vastness of time and history. Some of this has to do with the streaming-era mediocrity of the production design, especially when compared to the lovingly realized world Jackson’s preproduction crews created, but it goes beyond that. The war on Morgoth lasted about 600 years, but because it’s covered entirely as a 30-second scene in a Tragic Backstory Flashback, the impression that it was just one battle is hard to shake.

Elrond (Robert Aramayo) is born like 50 years before the end of that war, while Galadriel was born in Valinor before the count of years—let alone the war—began, but they’re presented as peers, in between him being a twerp. And it’s especially hard for me to figure out if my reaction to Galadriel herself is a genuine feeling that a trick was missed by putting aside her long and storied history, or irritating nerd-whining about text fidelity.

DYLAN: I can’t blame Rings of Power creators JD Payne and Patrick McKay for choosing a character who’s familiar to mass audiences as the lead of their show, nor for the decision to reimagine Galadriel as an action hero. I like starting her journey in a place similar to where Frodo finds himself at the end of his story, so changed by war that she’s unable to return to her old life. My issue is that it’s all laid on a bit too thick. I’m interested in Galadriel having fought for so long that she can’t imagine moving on, and the way that’s frightening both to her and to her peers.

The trouble is, she’s also 100 percent right and everyone else is 100 percent wrong. At the end of the first episode, Galadriel chooses to leap off the ship home to the Undying Lands, forsaking an eternal peaceful life to continue the hunt for Sauron. But really, there is no choice. Her buddy Elrond says that he’ll fight in her stead should evil return, but we’re given no indication that he, nor anyone else, has a fraction of her competence as a warrior or any interest in picking up her investigation. Everyone but her seems basically useless.

“Soldier who doesn’t want to retire doesn’t retire” is a relatively boring starting point for a character.

If Galadriel aches to throw down her sword but has to keep fighting because no one else can, that’s an interesting conflict. If Middle Earth would be safe in her absence but she’s too addicted to vengeance to allow her war to end, that’s an interesting conflict. “Soldier who doesn’t want to retire doesn’t retire” is a relatively boring starting point for a character.

JENNA: I agree. And since she’s the main character, her being stubbornly right in the face of everyone being patronizingly wrong takes up a lot of air, especially in Episode 1. Episode 2 gives Galadriel some of that wild-eyed madness someone in her position should have, but more importantly, it lets the other characters and plotlines breathe a little.

The other characters are a mix of canon and creation. You have the canon (well, kinda) with Elrond, who’s hanging first with 80s-CEO-styled Celebrimbor (Charles Edwards) and then Dwarf Prince Durin IV (Owain Arthur) and his excellent wife, Disa (Sophie Nomvete); and you have some whole-cloth creation with Arondir the Silvan Elf not-Ranger (Ismael Cruz Córdova) working through some stiffly choked-down love for human healer Bronwyn (Nazanin Boniadi), and with a community of Harfoot proto-Hobbits focusing on curious young Nori (Markella Kavenagh), her friend Poppy (Megan Richards), and a stranger they find (Daniel Weyman).

DYLAN: Where laying the groundwork for multiple parallel story threads makes Episode 1 kind of a slog, Episode 2 moves at a brisk clip and does a better job at juggling that assortment of tones. Arondir and Bronwyn are in a horror-infused mystery, investigating the destruction of a human village, while Bronwyn’s son Theo (Tyroe Muhafidin) goofs around with a magic, blood-guzzling sword emblazoned with Sauron’s sigil. Nori and Poppy are basically doing E.T., secretly tending to a wounded stranger who fell from the sky, doesn’t speak their language, and has otherworldly powers beyond their understanding. (The viewer is clearly supposed to assume this is Gandalf, though this could be a deliberate mislead.)

If this premiere is anything to go by, I think it’s important to acknowledge that this isn’t a show made for the lovers of Tolkien’s writings.

Finally, we have Elrond’s visit to his old friend, Durin, which is a lively and theatrical comedy. I even had fun with Galadriel’s subplot in Episode 2, in which she teams up with the handsome human sailor Halbrand (Charlie Vickers) to survive the voyage back to land. I’m grateful that these two chapters premiered together—Episode 1 had me a little worried that The Rings of Power was going to be “a show I have to watch for work,” but by the end of the next hour I was getting invested.

JENNA: Putting my own personal opinions aside regarding the need to invent a bunch of plot for this show when there was so much right there in the text, by the end of Episode 2 I’ll admit I was interested to see what they’d do next. I care about some of the threads more than others, of course, and I’m still nursing some very petty grumblings, but I’m certainly not hate-watching.

That being said, if this premiere is anything to go by, I think it’s important to acknowledge that this isn’t a show made for the lovers of Tolkien’s writings. There are essential elements, thematic as well as narrative, which are changed to the point of unrecognizability or simply not present. But if I can take this show on its own terms—which is to say, as a Big-Budget Generic Fantasy with Some Proper Nouns I Recognize—I think I’m going to enjoy myself just fine. 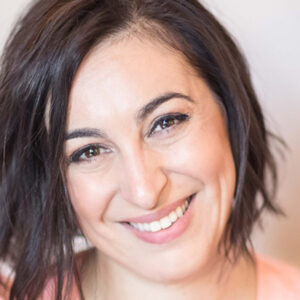 This week on The Maris Review, Miriam Parker joins Maris Kreizman to discuss her new novel, Room and Board, out now from...
© LitHub
Back to top