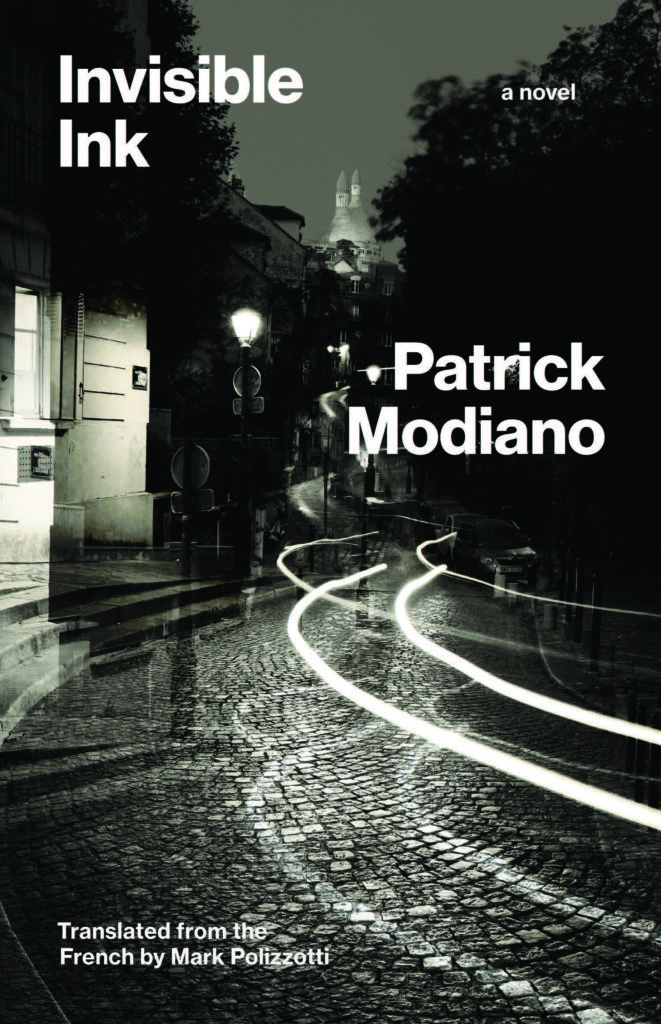 The following is excerpted from Patrick Modiano's upcoming novel, Invisible Ink, translated from the French by Mark Polizzotti. Modiano, one of France’s most acclaimed contemporary novelists, was awarded the 2014 Nobel Prize in Literature. His other books include Pedigree, Sleep of Memory, Paris Nocturne, and Suspended Sentences, among others. Polizzotti (translator) has translated more than fifty books from the French, including nine other books by Modiano.

There are blanks in this life, white spaces you can detect if you open the “case file”: a single sheet in a sky-blue folder that has faded with time. That ancient sky blue has itself turned almost white. And the words “case file” are written across the middle of the folder. In black ink.

This is my only remnant of the Hutte Detective Agency, the only trace of my passage in that old three-room apartment whose windows looked out on a courtyard. I was no more than twenty. Hutte’s office occupied the room in back, along with a cabinet in which he stored the archives. Why this file rather than another? No doubt because of the blanks. And besides, it wasn’t in the cabinet, but sitting abandoned on Hutte’s desk. A “case,” as he called it, that hadn’t yet been solved—would it ever be?— and the first one he talked about on the evening when he’d hired me “on a trial basis,” to use his expression. A few months later, on another evening at the same hour, when I had given up this job and left the Hutte Agency for good, I had, unbeknownst to Hutte and after saying my good-byes, slid into my briefcase the fact sheet in its sky-blue folder that was lying on his desk. As a souvenir.

Yes, my first assignment from Hutte was related to that fact sheet. I was to ask the concierge of an apartment building in the 15th arrondissement whether she’d heard from a certain Noëlle Lefebvre, a person who posed a dual problem for Hutte: not only had she suddenly disappeared, but we weren’t certain of her true identity. After seeing the concierge, Hutte instructed, I was to go to a branch of the post office, with a card he’d given me. On it was Noëlle Lefebvre’s name, address, and photo, and it was used for retrieving mail at the General Delivery window. The aforesaid v Lefebvre had left it behind. After that, I should go to a particular café to ask if anyone had seen Noëlle Lefebvre lately, sit at a table, and stay there for the rest of the afternoon, in case Noëlle Lefebvre showed up. All this in the same neighborhood and on the same day.

The concierge at the apartment house took a long time to answer. I knocked more and more insistently on the glass door of her lodge. The door opened onto a drowsy face. At first, it seemed like the name Noëlle Lefebvre meant nothing to her.

“Have you seen her lately?”

I didn’t dare ask anything further. I wouldn’t have had time, as she immediately slammed the door.

I was to ask the concierge of an apartment building in the 15th arrondissement whether she’d heard from a certain Noëlle Lefebvre, a person who posed a dual problem for Hutte.

At the General Delivery window, the man scrutinized the card I’d handed him.

“But, sir, you’re not Noëlle Lefebvre.”

At that, he got up and walked to a row of pigeonholes. He examined the few letters they contained. He came back toward me, shaking his head.

“Nothing addressed to Noëlle Lefebvre.”

The only remaining step was to go to the café. Hutte had mentioned.

An early afternoon. No one in the small interior, except one man, behind the bar, face buried in a newspaper. He didn’t see me come in and continued reading. I didn’t know exactly how to formulate my question. Simply hand him the General Delivery card in Noëlle Lefebvre’s name? I was embarrassed by the role Hutte was making me play, which clashed with my natural shyness. He raised his eyes.

“You wouldn’t have seen Noëlle Lefebvre lately, would you?”

It seemed to me I was speaking too fast, so fast that I mumbled.

He had answered so briefly that I was tempted to ask more questions about the woman. But I was afraid of rousing his suspicions. I sat at one of the tables on the small terrace that spilled out onto the sidewalk. He came to take my order. It was the opportunity to try and find out more. Innocuous phrases crowded into my head, which might have elicited concrete answers.

But when he served my grenadine, I said nothing.

I was embarrassed by the role Hutte was making me play, which clashed with my natural shyness.

I took out the card Hutte had lent me. And now that we’re in the next century, I’ve stopped writing for a moment on page XX of this Clairefontaine writing pad to have another look at that card, which lives in the file. “The bearer is authorized to receive General Delivery correspondence without surcharge. Authorization no. 1. Last name: Lefebvre. First name: No.lle. Address: Paris 15. Number and street: 88 Convention. Cardholder’s photograph. Is authorized to receive, without surcharge, correspondence addressed to bearer c/o General Delivery.”

The photo is much larger than a simple photo booth picture. And too dark. You can’t tell the color of her eyes. Or her hair: brown? light chestnut? On the café terrace that afternoon, I stared as intently as I could at that face whose features I could barely distinguish, and I wasn’t sure I’d be able to recognize Noëlle Lefebvre.

I remember it was early spring. The small terrace was in the sun and now and again the sky clouded over. An awning above the terrace protected me from rain showers. When a silhouette who might have been Noëlle Lefebvre came down the sidewalk, I followed her with my gaze, waiting to see whether she entered the café. Why hadn’t Hutte given me more clues about how to approach her? “You’ll figure it out. Shadow her so I know if she’s still hanging around the area.” The expression “shadow her” had made me laugh. And Hutte had looked on in silence, brows knit, as if dismayed by my frivolity.

The afternoon passed slowly, and I was still sitting at a table on the terrace. I imagined the paths Noëlle Lefebvre might follow from her building to the post office, from the post office to the café. No doubt she also frequented other places in the neighborhood: a movie theater, some shops . . . Two or three people she often saw in the street could have vouched for her existence. Or a single person with whom she shared her life.

I resolved to check at General Delivery every day. Sooner or later, a letter would have to fall into my hands, one of those letters that never reach their destination. No forwarding address. Or else, I’d stay in the neighborhood for a while. I’d get myself a room. I’d pace the area between her building, the post office, and the caf., and I would enlarge my field of observation in concentric circles. I’d stay attentive to people’s comings and goings on the streets and get to know their faces, like someone watching for the oscillations of a pendulum, poised to detect the tiniest waves. All I needed was a little patience, and in that period of my life, I felt capable of waiting for hours in the sun and rain.

From Invisible Ink by Patrick Modiano, translated from the French by Mark Polizzotti. Published by Yale University Press in October 2020 in the Margellos World Republic of Letters series. Reproduced by permission.

How Do Panic and 'Carpe Diem' Coexist? 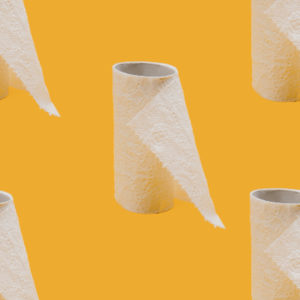 How Do Panic and 'Carpe Diem' Coexist? Hosted by Paul Holdengräber, The Quarantine Tapes chronicles shifting paradigms in the age of social distancing. Each day,...
© LitHub
Back to top