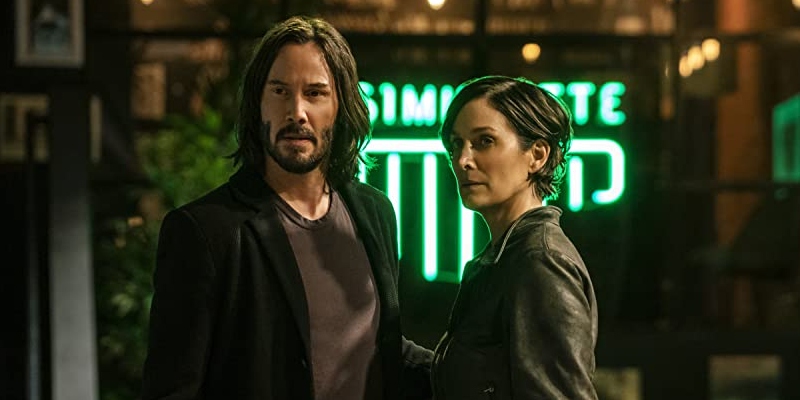 When The Matrix first came out on VHS, my friend and I took up residence in her family’s basement, replaying it so many times that we’d listen for the sound of fraying tape. Our favorite scene, the one we rewound until its visceral pleasures finally ceded to our fatigue, was the iconic “Bullet Time” sequence. But we didn’t watch it for the balletic precision of young Keanu Reeves amplified by granular slow motion—we waited for the very end, when Neo’s artful dodging still ends with him staring down the barrel of an Agent’s gun. Just as all seems lost, a sudden gunshot echoes behind the Agent’s head and sends him arching forward, dead before he hits the ground. There, standing with a martial erectness that can’t help but betray a shiver of pleasure at her victory, is Trinity (Carrie-Ann Moss). “Dodge this,” she says.

My friend and I would yell that line in tandem, right on cue. We’d jump off the sofa, high-five, dash to the VCR to rewind it again. Somehow, the moment seemed to confer on us—two awkward teenagers who lacked physical strength or poise and compensated with brainy brashness—all the power and cool of the most powerful woman on-screen.

The first Matrix film arrived at the end of a decade in which girls like us got discordant messages about our own worth. Sure, we had Buffy the Vampire Slayer, but night after night the most influential comedians in the world brutalized Monica Lewinsky as a fat slut (Jay Leno: “[Lewinsky] told reporters she was even considering having her jaw wired shut, but then, nah—she didn’t want to give up her sex life”) and Hillary Clinton as a selfish, frigid bitch (Chris Rock: “Hillary Clinton’s the first lady! She should’ve been the first on her knees to suck Bill’s dick!”).

In one afternoon, we could find sweet vindication in Daria lambasting untenable beauty standards right before House of Style featured interviews with “heroin chic” models talking about how, no, really, they loved a good cheeseburger. The thorny contradictions of 90s girlhood made a bestseller of Reviving Ophelia: Saving the Selves of Adolescent Girls, a book saturated in myopic whiteness. The “girl power” that supposedly distinguished us from our mothers and grandmothers was hard candy, firm enough to seem strong but too sugary to nourish.

Neo tells the young, nervous fighter that Trinity once believed in him and now it’s his turn to believe in her.

In the opening minutes of The Matrix, as Trinity scorpion-kicks her first anonymous baddie, she heralds a new kind of heroine, one with the elegant lethality long afforded to men. She’s guided by her causes, both to liberate humanity and to protect the man she loves. The trilogy isn’t showy about Trinity’s power—she’s simply fierce enough that fear of her compels the crime boss, the Merovingian, to release Neo from the limbo of Mobil Avenue, because she’d undoubtedly kill every living being in Club Hel otherwise. The multifaceted interiority of Moss’ performance, at times coiled before the strike, sometimes softly contemplative and other times wryly resigned, gives Trinity a relatable humanity at a time when the few mainstream action heroines not named Ellen Ripley were Bond girls or lady Bond villains, or else reduced to sidekicks or love interests.

In her own way, Trinity was also a sidekick and love interest—the movies are, after all, about Neo’s full ascension to become “the One”—she just gets to be tougher and vastly more capable than usual. She gets to save the guy. But she still dies in her lover’s arms as the music swells, her death motivating Neo to make the ultimate sacrifice and become the Christ-like savior she believed in. Trinity may have been a balm against the limitations of Girl Power, but she wasn’t immune from their sting.

I’m nearly 40 now, decades removed from the fangirl teenager in my friend’s basement, though I felt that shadow of myself when watching the new Matrix film, appropriately called Matrix Resurrections (now streaming on HBO Max). In Lana Wachowski’s film, Trinity emerges once again from the pink-gooped mechanical womb to take her first gulps of air in a real world that’s finally, if not fully, reckoning with the prolonged witch-burning of the 90s and early aughts.

We’ve reclaimed Monica Lewinsky and Britney Spears and Janet Jackson from the hypocrisies that damned them, scavenged the wreckage of disastrous diet and purity cultures. We’re grasping for toeholds to climb, bloody knuckled, out of the pit of so much normalized sexual violence. Like much of the online commentariat, I was excited to see a 56-year-old woman do kung fu and be framed lovingly in close-up. The bar is so low as to be in hell; I wasn’t hoping for more.

Trinity levels up, beyond what was possible in the 90s and early aughts.

The movie initially centers on our new pop-punk crew’s attempts to liberate Neo from his reimprisonment as Thomas Anderson, a timid video game designer and creator of the legendary Matrix game series. Scenes juxtapose the middle-aged Neo against the faun-like beauty of his youth, at one point literally positioning him in front of a screen showing the iconic “red pill, blue pill” moment. There, in the background of the old footage—and in the older Neo’s mind—is Trinity. She is also a prisoner in the matrix, locked in the life of Tiffany, a married mother of two whose brief respite from domestic chores comes in her work at a motorcycle shop and an impromptu coffee with Neo-as-Thomas Anderson.

Afterwards, the film pulls a switch that feels radical for women like me, who grew up before Beatrix Kiddo, Katniss Everdeen, and Imperator Furiosa. Matrix Resurrections is about the search for Trinity, not just as a middle-aged damsel whose return will fortify Neo into becoming the Zen messiah anew, but as a woman who, once upon a time, believed she could do anything, only to find she couldn’t walk off the battlefield alive. If the first film focuses on Neo’s awakening to his full power and purpose in a world that desperately needs him, then this film applies a similar inquiry to whether Trinity will become the righteous heroine who’s inspired generations of fighters after her.

The film’s grand moment isn’t a physics-bending battle between heroes and villains. It’s a choice.

Trinity means something to the resistance fighters led by Captain Bugs (Jessica Henwick). In a self-aware yet unabashedly earnest scene before the crew mounts their daring rescue of Trinity, one of the women approaches Neo to tell him that Trinity was her hero, the reason she took up the fight—and to confess that she’s scared her hero might not live up to her expectations. It’s a meta-acknowledgement of women my age, watching with our hearts burdened by being overachievers at work and mothers of the year, dispensers of care and swallowers of so much slow humiliation, gutted by the grief over all we didn’t get to do in the prime of our youth. A grief that feels more pronounced because we were told we could do anything, and also that we were worth nothing.

The film’s grand moment isn’t a physics-bending battle between heroes and villains. It’s a choice: when Neo sits down again with Tiffany, explaining to her that she is indeed the woman from his “video game,” the one who can jump between buildings and fly helicopters into skyscrapers, who can take on armies with her bare hands, she demurs at first, seems almost embarrassed at the idea that so much power ever revved inside her body. “I’m not who you think I am,” she says, her voice thick with the regret.

I’m not who I thought I would be at this age. Despite the late-night hosts and Seventeen magazines, I still believed I could have it all, or at least I wanted it all—only to find myself subjected to reality. Neo tells the young, nervous fighter that Trinity once believed in him and now it’s his turn to believe in her. But that’s only a half-truth: Trinity must believe in herself. Only then can she regain her old power.

Wachowski knows, though, that the old power isn’t enough, and Trinity levels up, beyond what was possible in the 90s and early aughts, when an on-screen woman’s abilities could never surpass a man’s (even if he was an egalitarian partner like Neo). When Trinity and Neo take their leap of faith off a building, she is the one—the One—who holds them aloft.

Laura Bogart is the author of Don’t You Know I Love You (Dzanc Books). She is also a non-fiction writer who focuses on personal essays, pop culture, film and TV, feminism, body image and sizeism, and politics (among other topics). Laura is a featured contributor to The Week and DAME magazine; her work has also appeared in The Atlantic, The Guardian, SPIN, The AV Club, Vulture, and Indiewire (among other publications).

Learning, Practice, and Repetition: Why the Act of Writing Is Work 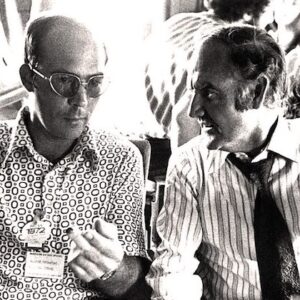 Gonzo journalism was an attitude, an experiment, and a withering critique of hypocrisy and mendacity. It began as an accident,...
© LitHub
Back to top