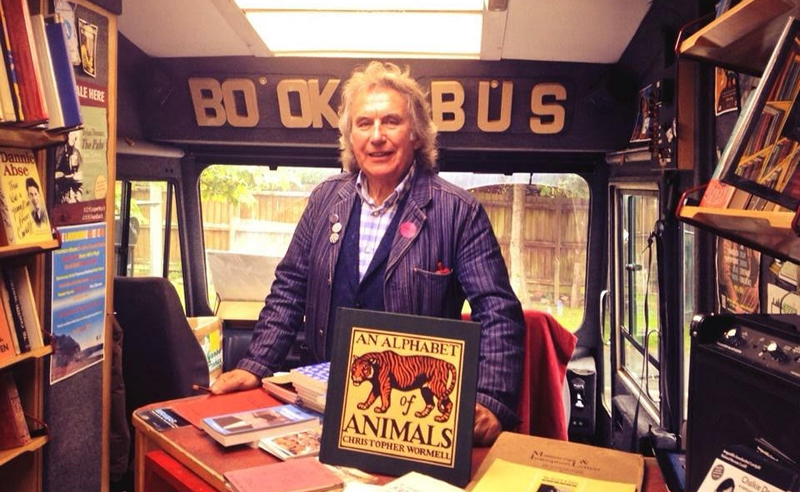 The Merry Brand of Pranksters Bringing Literature to Music Festivals

Dylans Mobile Bookstore was dreamt up three years ago by Jeff Towns and his son Joe in a bar in Laugharne, Wales during a literary festival. Jeff, an antiquarian bookseller for 40 years, had closed his old shop in Swansea, Wales ten years prior, but he still had about 10,000 books in storage and was missing the buzz of the book trade. He had been considering starting a pop-up bookshop that would travel to various festivals when Joe suggested that he buy an old library bus instead. Before long, they’d dubbed it Dylans Mobile Bookstore and were on the road with a merry brand of pranksters; Joe handles the bus’s bookings and social media, their friend Huwie drives, and Joe’s wife Gwar keeps everyone in line. 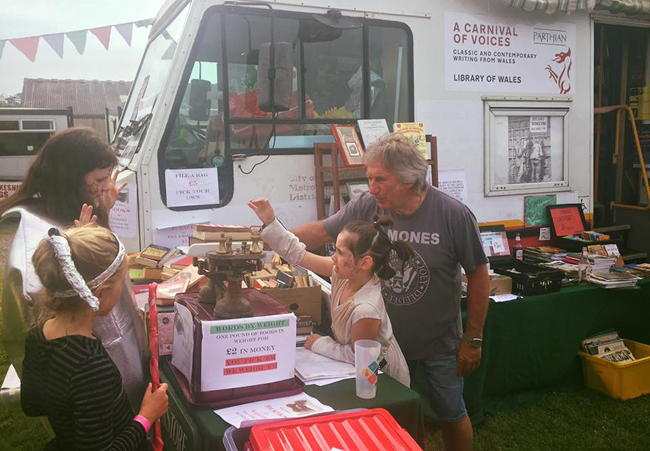 Jeff: My favourite section has to be our Beat section. We stock classic titles by Burroughs, Ginsberg, Kerouac…We loosely based Dylans Mobile Bookstore on Ken Kesey’s Magic bus, and we also have a big cardboard cut out of Neal Cassady behind the wheel. On the side of the bus is our motto: “Find an event, immerse yourself, become the story.” It’s one of Hunter S Thompson’s.

My favourite bit of the bus is the artwork on the outside—a wrap-a-round frieze of my dream bookshelf —it goes all the way around the outside of the bus and has all our favourite books on it. Ted Hughes’ Crow, Orwell’s Animal Farm, Kafka’s Castle, Fear and Loathing, Vietnam Zippos…

Joe: I look after the vintage stuff, so that’s my favourite bit: retro ladybird originals, rare music magazines, curious Victoriana, political pamphlets, old medical prints and postcards, hilarious educational and etiquette books from the ’30s, ’40s, and ’50s about how we used to live. Even things like magic lanterns and all the erotica! Any of the weird stuff.

Gwawr: I run a section on the Bus called Blind Date Book Club, where I wrap up books in brown paper and put a few cheeky clues on the cover and then people pick a book based on the clue—basically a blind date with a book. It’s one pound a go. A pretty cheap date, I reckon! And these books are always the first to sell out. 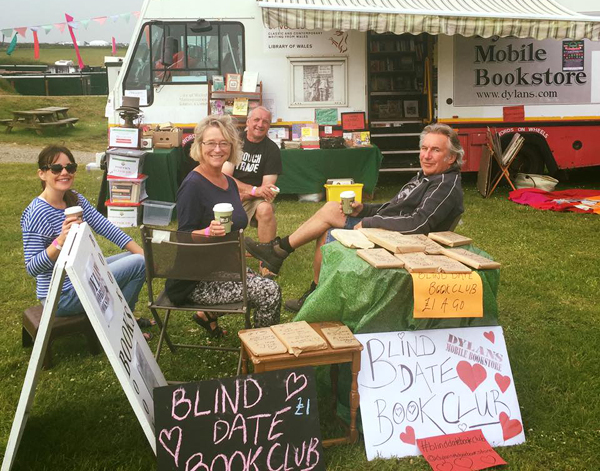 Jeff: We have a graffiti artist in residence; his name is Simon Dark. He does spray can stencil pictures of all our literary heroes—Richard Brautigan, Tom Wolfe, Hemingway, and Hunter. And shot gun art of all our least favourite politicians. It would be cool to have some spare wall space for his pictures. Oh, and personally I’d like An Art Deco Art Nouveau absinthe dispenser on the counter…

Jeff: Thomases! We specialise in Dylan Thomas, R.S. Thomas, Edward Thomas, and Gwyn Thomas. We are based in Wales, and those are four of our finest literary legends. So we have Thomas covered. And Poetry! No one does poetry like us. Not only do we stock a lot of poetry, but we also hold pop up poetry sessions on the bus for people to come and perform. Amateurs and professionals both.

We have a friend who is an actor who comes on the road with us and dresses up as “The Poetry Bunny,” standing outside the bus and ambushing punters with verse. Simon Dark also helps us run something called “Poetic Type” where we encourage customers to write poetry on old typewriters. It’s amazing what they come up with. It would be cool if we had room for more typewriters. One day we’ll publish a book of all the amazing poems our customers have left us. 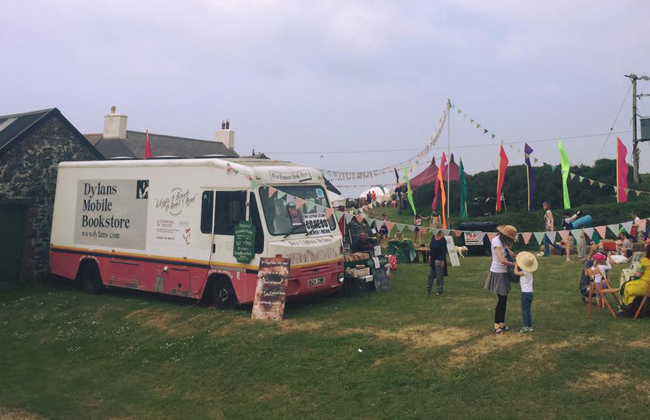 Jeff: There’s a guy called Gruff Rhys who sings with a band called the Super Furry Animals; he has an amazing aura whenever he comes on board. He’s very calm and wise, talks slowly, and asks for extremely obscure books about Welsh heroes: myths and legends like Iolo Morgannwg.

Musicians always make great customers. Thurston Moore from Sonic Youth came on once and bought some really interesting Welsh poetry from a publication called Second Aeon; that was cool.

Joe: Wow, where to start? Going to music festivals, it gets pretty surreal and strange at night, but we have another old Hunter S Thompson saying we like: “When the going gets weird, the weird turn pro.” People at festivals are often in fancy dress so we’ve had bears, zulu warriors, spacemen, and guys on stilts all buying books of us. Once the artist Gavin Turk came on the bus dressed as a tree. The thing with festivals is no one ever has any cash. People always want to trade books for alcohol or sunglasses or even hash cakes!

At the Good Life Festival we had a lovely lady buy an old copy of private eye magazine with Robert Maxwell on the cover. We asked why she wanted an edition with such an evil guy on the cover and the girl said, “Robert Maxwell was my granddad.” And at the Green Man Festival last year, a guy arrived on a raft, attached to a barge, on which he was delivering a piano to London. He asked for some books on pianos. See what I mean? It’s weird. 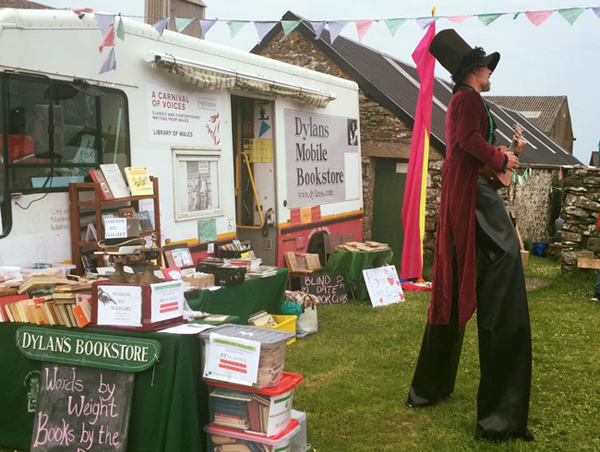 Jeff: I remember Better Books and Compendium Bookstores in London when I was young. I could get my hands on early Beat stuff, drug literature, and counter culture books. I won a prize at school on sports day when I was 16, and the prize was a book token. I could have any book I wanted. I went to a bookshop in East London and bought Howl, and the head teacher had to present it to me. I don’t think he read it!

I went to my first ever antiquarian book fair in Bath in 1971. It was in an ancient eight-sided building called the octagon, and I remember seeing all these men with beards surrounded by incredible books. I was intrigued and hooked for life!

Jeff: Probably some sort of itinerant tramp. I’ve never had a proper job, never had a boss; life on the road suits me. I really can’t imagine being anything else other than a bookseller. I did want to be a pro basketball player back in the day. I once sponsored a local team in Swansea, and we were called the Dylans

Joe: I guess if we didn’t have the BookBus we’d still go to the festivals, but having the bus makes it easier, it justifies it. We take the BookBus to the sort of festivals we always wanted to go to anyway—the sort of bespoke rock and roll festivals which also cater for the arts. It’s amazing how these festivals now get in touch with us, invite us along with the bus, and treat us like performers with backstage passes. Some of us have normal jobs, so it’s just a joy to come and work on the bus. I sleep on it too, which is magical. 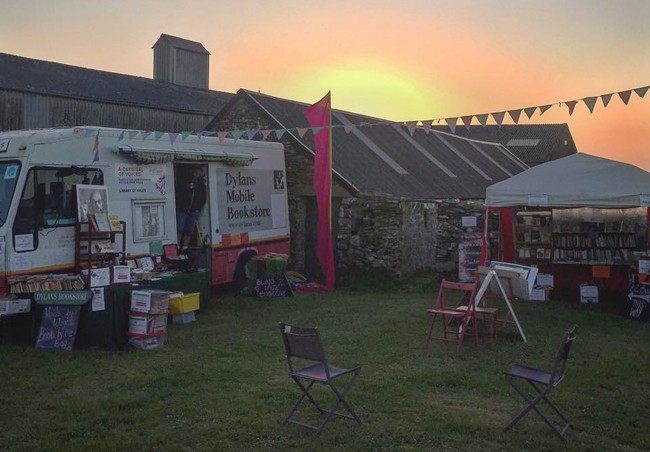 Jeff: The constant synchronicity that seems to occur in the book world. The amount of times I’m sat reading a book and then someone comes in and asks for that very book—it’s spooky. There are always amazing moments of serendipity and destiny in the book trade. I feel it when I’m in other bookshops, too; I find myself instinctively drawn towards a certain shelf. I can sense where a bookshop will be in cities I’ve never been to.

Joe: I’m always pleasantly surprised how much the people at music festivals want to actually buy books. They seem to find the Bus a place of tranquility, a break from the madness—we have music playing but we keep it mellow. Coming on the BookBus, because it’s an authentic old library bus, people get all nostalgic about their school days and remember the day the library bus would visit: the way it wobbles when you step on, like it’s boat on the sea, and the cantilevered shelves. People have a sort of epiphany. It’s a genuine madeleine moment for them. 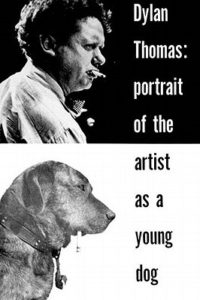 Jeff: I would recommend Portrait of the Artist as a Young Dog. A stunning collection of short stories by Dylan Thomas. People forget what an amazing prose writer Dylan was, and how funny he could be. 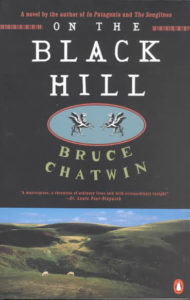 GWAWR RECOMMENDS: I’m from a farming background in Wales, and the way Chatwin describes how life can be on a farm is perfect. 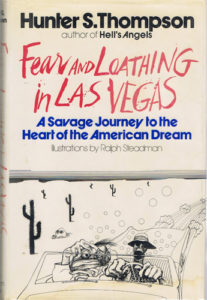 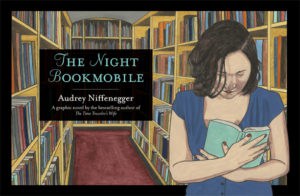 JOE RECOMMENDS: I think The Night BookMobile by Audrey Niffenegger would be apt.

Writing Must Explore Its Relation To Power 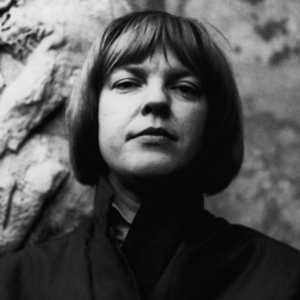 “The objective for me is to find a language that tells the reader something hard to define about the texture of each...
© LitHub
Back to top
Loading Comments...