In Which Eliot Weinberger Catalogues a History of Hyacinths

Hyacinth of Fara: "A martyr about whom nothing is known."

Hyacinth of Caeserea
(Cappadocia, d. c. 120)
In prison, the only food he was given was meat that had been consecrated to idols, which he refused to eat, and he starved to death. The jailers saw him comforted by angels. He was twelve.

Hyacinth of Porto Romano
(Italy, 2nd century?)
A martyr, his existence is only probable.

Hyacinth
(Egypt, d. c 257)
He lived with the hermits of the desert, then went to Rome, where he was beheaded.

Hyacinth of Paphlagonia
(Anatolia, 3rd century?)
He cut down a tree sacred to the pagans and was tortured to death.

Hyacinth of Fara
(Italy, date unknown)
A martyr about whom nothing is known.

Hyacinth Odrowaz
(Poland, 1185-1287)
Appointed by St. Dominic himself, he spread the Word, and founded churches and monasteries in ceaseless travels through the “outposts of civilization”: Eastern Europe, Prussia, Russia, Turkey, Greece, Scandinavia—where he slept in the snow—and, it is said, though there is no record of it, Tibet and China. Wherever he preached, he spoke in Polish but the people miraculously understood him.

When the son of Princess Przybislauska drowned in the river, he brought him back to life. He provided miraculous pierogi during a famine. He restored the sight of two children who were born without eyes.

In the Mongol sack of Kiev, as he was rescuing the ciborium holding the Blessed Sacrament from the monastery, the Virgin Mary asked him to take her too. He carried a stone statue of her, larger than himself, and led the faithful to the banks of the Dnieper. He told them to follow him to safety and they all crossed dryshod. His footprints remained on the surface of the water, and for centuries could be seen whenever the river was calm.

Hyacintha Mariscotti
(Italy, 1585-1640)
Her lover, the Marquis Cassizucchi, married her younger sister, and she became so petulant that her parents sent her to a convent. She escaped, was returned, and for ten years was considered impossible by the nuns, ignoring the rules, asserting her aristocratic privilege, receiving visitors in a lavishly furnished cell with a private stock of food. She became ill, was told by her confessor that she was serving the devil, and suddenly reformed and led an austere life. Then she reverted to her scandalous ways. She became ill again and, according to her hagiography, turned into “a model of heroic patience, penance, prayer, untiring goodness, sweetness, and promptness in serving all. From that time she gave herself to a life in which cruel disciplines, constant fasts, deprivation of sleep, and long hours of prayer all played their part.” She is liturgically celebrated as a virgin.

Hyacinth of the Angels
(Mexico, c. 1660-1700)
He and his friend John-Baptist were Zapotec laymen charged with suppressing Zapotec rituals. Hearing that a ceremony was taking place, they intervened and confiscated the ritual objects. The next day they were attacked by an angry mob, who cut open their chests with machetes and, as the Aztecs had once done, extracted their hearts.

Hyacinth Castañeda
(Spain, d. 1773)
A Dominican monk, he was sent to Asia: a long sea voyage to Mexico, where he was ill the whole time; a long march across Mexico; a longer sea voyage to Manila, where he was ill the whole time. Manila had been captured by the English, and it took him months to find the other missionaries. Then to China, where missionaries had been recently martyred. The Chinese deported him to Vietnam, where he was tried and beheaded. At his trial, a spectator supposedly called out, “We’d believe him if his Lord of Heaven came down and set him free.”

Hyacinth Cormier
(France, 1832-1916)
As a youth, he was musically talented, played the flageolet, the organ, and the ophicleide, and was praised by Franz Liszt, who heard him perform. He wanted to join the Dominicans, but suffered from chronic hemorrhage, and there were fears of tuberculosis spreading in the monastery. Yet his piety was such that his superiors appealed to Pope Pius IX, who said that if he could last for a month without an incident he could be ordained. On the 29th day he had an attack that was so severe, it was decided to ordain him on his deathbed. The pope declared “since it is not for him to live under the religious habit, it will be at least for him to die under it.” He recovered, lived on for fifty years, founded orders and colleges, oversaw convents, wrote the biographies of eminent Dominicans, and levitated while in prayer.

(Hyacinth the flower sprang from the drops of blood on the ground from the slain Hyacinthus, and was a Christian symbol of rebirth through the blood of Christ, as well as prudence, peace of mind, and the desire for heaven. It was ignored that Hyacinthus was a beautiful Spartan prince, the lover of Apollo, who died in a game of quoits, either accidentally or through the jealousy of Zephyrus, who also lusted for him. At his death, according to Ovid, Apollo wished he were mortal and could join him.) 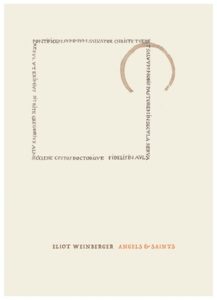 From Angels & Saints by Eliot Weinberger, copublished by Christine Burgin and New Directions.

Eliot Weinberger’s books of literary essays include Angels & Saints, Karmic Traces, Oranges and Peanuts for Sale, An Elemental Thing, and The Ghosts of Birds. His political writings are collected in What I Heard About Iraq and What Happened Here: Bush Chronicles. The author of a study of Chinese poetry translation, 19 Ways of Looking at Wang Wei, he is a translator of the poetry of Bei Dao, the editor of The New Directions Anthology of Classical Chinese Poetry, and the general editor of the series Calligrams: Writings from and on China. His work has been translated into over thirty languages, and appears frequently in the London Review of Books. He was born in New York City, where he still lives, and has been publishing with New Directions since 1975. 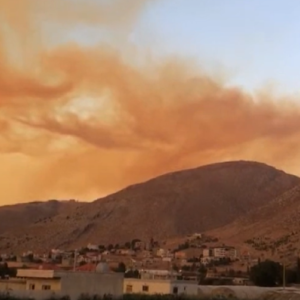 MIRENE Good morning Lina, There’s a seven-hour lag between me in New York and you in Beirut but it feels like we are worlds...
© LitHub
Back to top
Loading Comments...