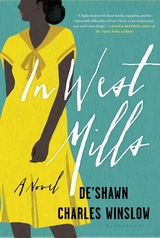 The following is from De'Shawn Charles Winslow's novel In West Mills. Despite her rural community's disapproval, Knot is trying to live the life she wants. Otis Lee, her neighbor, tries to keep her out of trouble, neglecting his own personal problems. De'Shawn Charles Winslow has received scholarships from the Napa Valley Writers’ Conference and the Bread Loaf Writers’ Conference. He lives in East Harlem.

Otis Lee had tried to steer Knot, just as he had tried to steer his older sister, Essie, who had left home to go north. She was in New York passing for white. Who Essie’s white father was, Otis Lee never knew, and he didn’t care. He had known his own father and he still missed him dearly. He’d drowned in the canal when Otis Lee was a child.

Essie was living a life Otis Lee couldn’t get his head around. It seemed as though she put herself in harm’s way every day. At any minute, if her truth were uncovered, she could be beaten or something worse. Otis Lee didn’t know Essie very well. His mother had told him that Essie was already grown and gone before he could even turn over on his own. But it didn’t matter. From the time Otis Lee was old enough to understand that he had an older sister, and old enough to understand her circumstances, he cared about her.

In ’24, when Otis Lee was sixteen, he’d gone to New York, and with the help of his aunt—the aunt who had adopted Valley—he found Essie. New York City had proved itself to be all the things he had heard about it: nothing like North Carolina, never resting, plenty to o er, and plenty to take away. So Otis Lee was pleased to find that Essie lived in what he thought of as a calm part of town.

Even so, he had wanted so badly to help her and protect her—even knowing of the bad thing she’d done to the family. Ma Noni had told him that Essie had sold her land dirt cheap, for pennies on the dollar, so that she could have money to run away and pass. According to Ma Noni, Essie had caused him, Rose, his father, and Ma Noni to be homeless for a while because of what she had done. Neither Otis Lee’s father nor Rose ever spoke of it. And when Otis Lee once asked Rose about Essie and the land, all she had said was “The past is the past, baby boy. Everythang turn out all right.”

While living in Brooklyn, in Essie’s brothel, Otis Lee often thought of all the things Ma Noni had told him, and he imagined killing Essie. But mostly he just wanted to protect her, lead her away from the danger she was courting. Finally, after some time living with and working for Essie and her crooked policeman husband, Otis Lee saw that she was no longer the Essie his mother often secretly spoke so fondly of. She had become Ellen O’Heeney. And for Ellen O’Heeney, there was no turning back.

That’s what she had told him as he was leaving her house on that cold day in ’27. Otis Lee remembered the sweet look in her eyes when he walked away from her back stoop. That sweet, sad look—a look he wouldn’t understand for several decades, after receiving a bundle of letters—was all he was going to get from his sister, because she didn’t make a move to hug him or even shake his hand. But it had seemed to Otis Lee that she had wanted him to see that sweetness.

Now fourteen years had come and gone since he had returned to West Mills, married Pep, and, years later, become a father. Otis Lee hadn’t heard from his sister. No one had.

Essie knew her own mind, just as Knot knew her own. Otis Lee decided he would be misleading Pratt if he stood there trying to convince him to stay in West Mills for Azalea Centre. So he didn’t.

Excerpted from In West Mills. Used with permission of Bloomsbury Publishing. Copyright © 2019 by De’Shawn Charles Winslow. 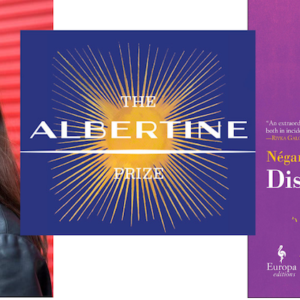 Négar Djavadi's Disoriental  wins the 2019 Albertine Prize for best French novel published in the U.S. Disoriental, Négar Djavadi’s novel that explores the epic journey of a family over three generations between Teheran and Paris;...
© LitHub
Back to top